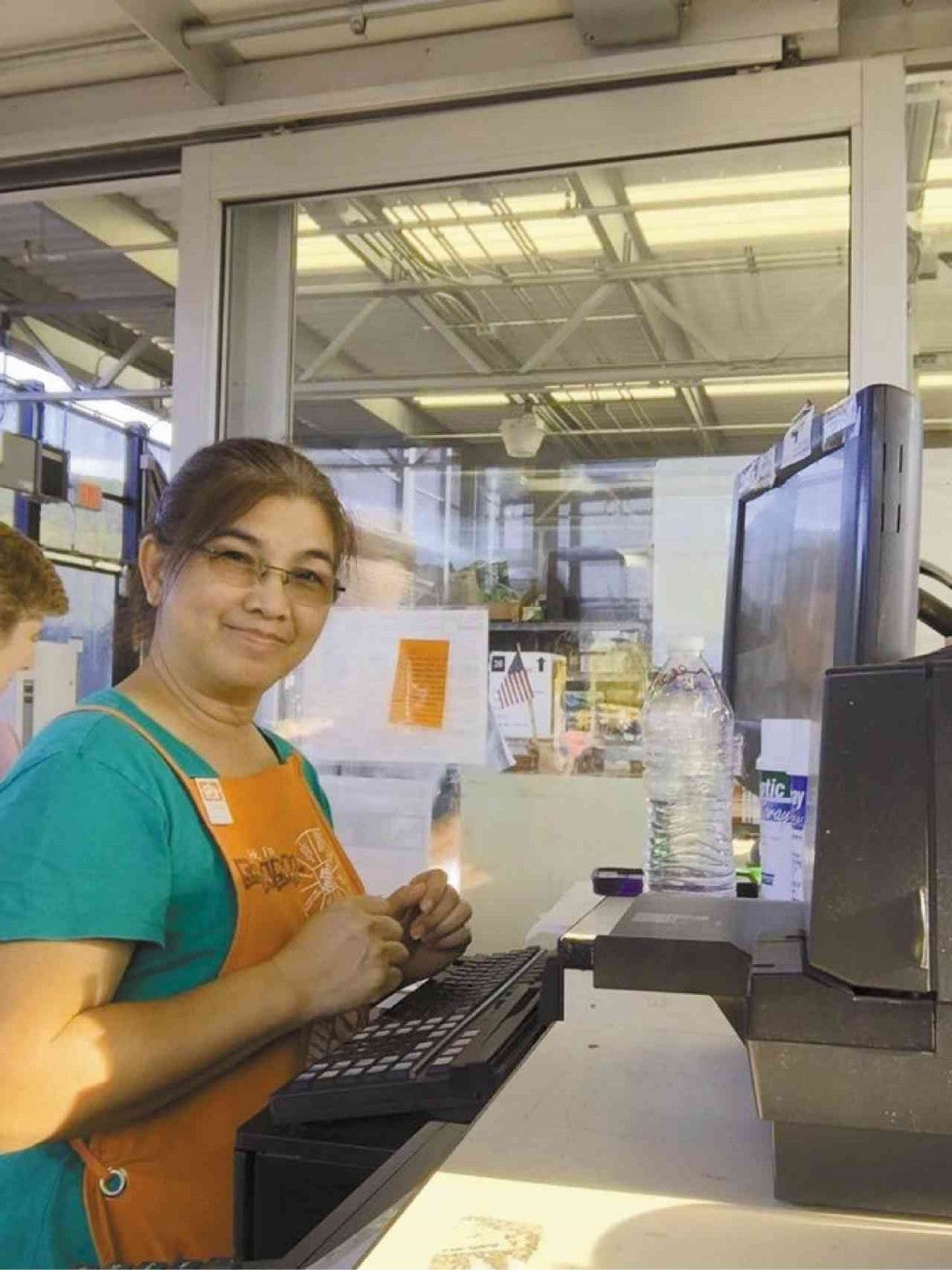 CAREER SHIFT Emma Hernandez Baltazar is now a sales associate in Home Depot after her stint as a physical education teacher in several New York City middle schools. She says, “What is important is we are happy in what we are doing.”

Emma Hernandez Baltazar, 57, a former physical education (PE) teacher, did not expect to land in New York and eventually get a US citizenship without too much trouble experienced by hundreds of teachers aiming to work in American schools.

It was October 2004 when Baltazar got a call from the New York City Department of Education (NYCDOE) to attend an interview for teachers and bring all her necessary credentials to Westin Philippine Plaza in Manila.

At that time she was teaching at Occidental Mindoro National College. Since she did not apply for any agency, she was quite surprised and thought it was a scam. Her daughter, Ayesha, was in Manila and persuaded her to attend.

Baltazar went to Westin Philippine Plaza wearing simple slacks, blouse and a pair of borrowed heeled shoes from her daughter.

To her surprise, there were long queues of teachers from the best schools and universities in Manila and other provinces wearing suits.

The interviews of NYCDOE were for Science, Math, Special Education and PE teachers. Each room was assigned a field of specialization.

For PE teacher applicants, Baltazar was with instructors from Ateneo, De La Salle University and other big-time schools. The 20 teachers were asked to enter the room to be interviewed simultaneously. The interviewer was a Ms Marcia, an American representative of NYCDOE.

“Because I couldn’t still believe it, I was slow, so I got a seat in front of the interviewer! Whenever she asked me, I answered straight to the point. Less talk, less mistake. I was also nervous that she could not understand my English,” she laughs.

After a few questions, Marcia asked Baltazar to submit her master’s degree diploma and transcript of records. Finally, the representative told the interviewers that she only needed three teachers.

“I was shocked. I’m more than surprised because she pointed at me first! Then the teacher from Baguio and another one from a Manila public school. While I was still in ‘shock’ the other teachers from prestigious schools went outside, obviously disappointed,” she says.

The three of them signed the contracts, documents and other materials about New York City and their works, possible houses/apartments for rent and the salary deductions for visa and plane ticket.

“That was when I really believed that everything is true. I did not pay a single centavo while in the Philippines. Out of curiosity, I asked the secretary why they called me. She said my name was on their database,” says Baltazar.

Bite of the Big Apple

On Oct. 8, 2005, Baltazar and four other teachers flew to the US. Their salaries started when they arrived. They were billeted in a hotel for two weeks until they found apartments and were deployed to various public schools in New York. The NYCDOE processed all their documents upon arriving. She took the New York State Teacher Certification Examinations and passed.

Baltazar was deployed in Edward B. Shallow School in Brooklyn, teaching Physical Education to middle schoolchildren. After a few years she transferred to Christopher Avenue Community School teaching K-2.

“I was culture shocked when I arrived here. The students were very different from the Philippines. I had to be aware that kids have all the freedom just because—as they say—they are just kids, I had to be very careful in dealing with them or I would end up in jail. My patience was really tested here. It was a struggle.

After classes either I went biking or just stayed in the house, ate, talked to my kids and grandchildren. On weekends, I would go to the movies from 9 a.m. till midnight. That’s how I dealt with homesickness and frustrations with the students,” she shares. 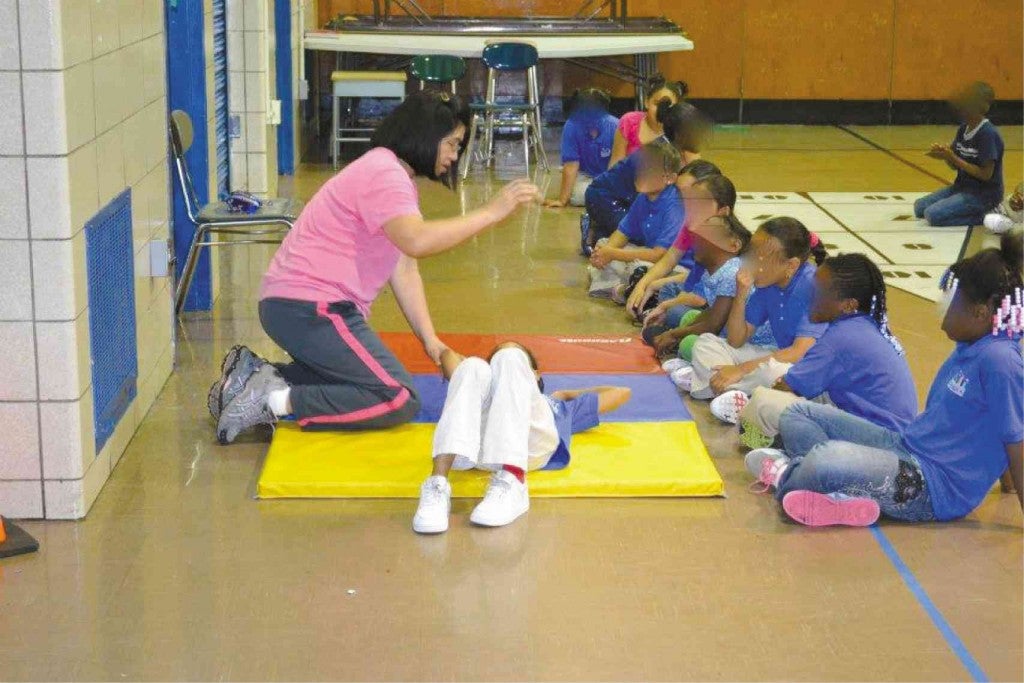 LET’S GET PHYSICAL Assisting a student in a physical education activity.

“My assistant principal would always say I have a wide range of experiences as a teacher. We were four PE teachers and I was the only female. But they would say that they can’t believe I am well versed with sports and that I can really play. They thought I was weak,” she says.

Baltazar claims that she did not experience discrimination because the schools where she taught were multicultured. They all paid the same with insurances and other benefits regardless of nationalities. In her second school assignment, she was sent to a black community teaching middle school.

“Most of the students were poor in spelling and handwriting because nobody’s home to watch over them because their parents worked till midnight. Only a few really come to learn,” she laments.

Baltazar experienced being cursed by a black student on the street. She also got locked in school because of a shooting rampage outside where a parent got killed. The shooter was on top of an adjacent building shooting at anyone below.

But the best part was when her valedictorian Asian student gave her a beautiful poster with a dedication, “to the best teacher we ever had.”

After seven years of teaching, and then eventually getting a citizenship, Baltazar retired. She got her pension from the Teacher Retirement System. With a high salary from the government she was able to buy two cars. She is now in the process of petitioning her two adult kids and their families to the US.

In the US, age is not a hindrance to find work. Now she is a sales associate/cashier at Home Depot for two years now. Even with a lower salary, she says that money oftentimes cannot compensate the depressions and frustrations she felt when she was teaching. Still she treasures her experiences as a migrant teacher.

“Filipinos are flexible. We can be whatever we want to be. What is important is we are happy in what we are doing,” Baltazar says.