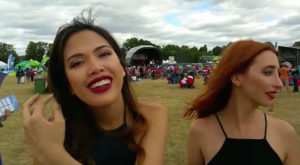 Although it is still referred to as “London Barrio Fiesta,” the celebration is now held in Surrey, not too far from the famous Hampton Court Palace. The London Barrio Fiesta draws Europe’s largest gathering of Filipinos outside of the Philippines.

From only hundreds of people in its first year, the festival has grown bigger and now has an estimated average attendance of 20,000 people.

Even in 1999, Ed Maranan wrote in the Philippine Express International that the event “remains the top crowd-drawer of any Filipino community event in the United Kingdom, and possibly in Europe.”

The London fiesta started in 1985 as a small gathering in Holland Park by the Philippine Centre, led by immigration advisor and journalist Gene Alcantara (at the time the Centre’s chairman).

In the book, Hinabing Gunita: Filipinos in the United Kingdom, Nona Tomelden recalls the first-ever fiesta in Holland Park: “The stage was the grass. The emcee stood on a plastic container. No microphones, no nothing… It was a mini, mini barrio fiesta.”

“There weren’t even any tables and chairs,” Tomelden recalls. “We put some bunting up, and there! We had a fiesta! It was very enjoyable. We didn’t make much money but it was okay. People heard about it by word of mouth.” By 2003 Tomelden noted, “sixty thousand people [attended the] two days.” 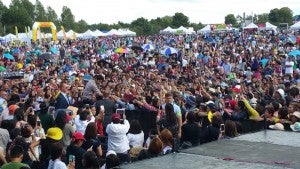 Actor Zanjoe Marudo singing and shaking hands with the crowd.

More recently, the London Barrio Fiesta has partnered with ABS-CBN. Every year stars and celebrities come from the Philippines to entertain the fiesta-goers.

Singer Morissette Amon stated, “Super excited po. Every performance I get to do for TFC parang blessing siya. It’s actually my first time here in London and I’m very happy kasi it’s a chance to reach out to people who cannot go home all the time or see their loved ones. We have to do that for them. Sobrang excited ako to perform at this event.” 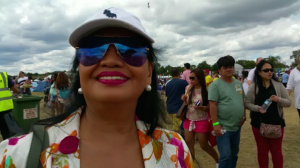 Leonor Vintervoll came all the way from Oslow, Norway to enjoy the fiesta.

“We performed ‘I See Fire’ in front of the Filipino community and it was amazing,” said Zyrah Filipina member Christine Allado. “Although we’re missing [band member Charlotte], we had a really good time performing for everyone and representing Zyrah. Thank you.”

Various Filipino-targeted companies marketed and promoted their brands at the event. Businesses from the Philippines and the UK had stalls to sell products and services, including the larger condominium and real estate companies such as Century Properties, Mega World, SMDC and Sta Lucia.

Remittance giants such as Western Union, as well as travel and immigration firms, marketed their services. Most businesses had giveaways and raffles. The mobile corporation Lebara gave out blue umbrellas to everyone that purchased a SIM card.

There was a fairground with rides and rollercoasters, as well as courts to play games such as volleyball.

The UK Barrio Fiesta season draws Filipinos from all over Europe who come to celebrate their culture and some hope to emulate the fiesta in their own respective home bases.

Hugh de la Cruz, an OFW based in Wales, said, “This is one of the biggest Filipino events in Europe and is the best chance to be with Filipinos in the UK. I came here to be with them and celebrate our heritage.”

Eden Flores Ackermann who has been based in Hamburg, Germany, for 30 years, visits the Fiesta annually: “Punta ko sa London for the fiesta kasi sa Germany wala. It’s very enjoyable. I see lots of Filipinos, I eat Filipino food, I get updated with celebrities. What’s going on in the Philippines, you can get here.” 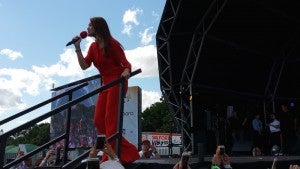 Leonor Vintervoll from Oslo, Norway, said, “I’m here to be with all the other people from my country, and to pick up tips because we also hold a Filipino fiesta in Norway. It’s good to see what they do here so we can do it also in Norway.”

Nikki de Guzman, a 17-year-old Filipina based in the UK, attends the London Barrio Fiesta every year. “I was seven when I moved here [from the Philippines],” said de Guzman. “We come here every year [because] it’s sort of like the Filipino community getting together again. It feels like home to us.”

With the 31st success of the London Barrio Fiesta, individuals and organizations will continue to come and join the festivities, allowing old and new generations of Filipinos abroad to delight in the richness of their country and preserve their sense of cultural community in Europe for years to come.

Fiestas that took place in June include the Morden Independence Fiesta and the Fil-Herts Barrio Fiesta. Upcoming fiestas scheduled to take place in England for the rest of the month include the Hounslow Summer Festival, Milton Keynes Fiesta and Norwich Fiesta.-Melissa Legarda Alcantara @melissalegalc