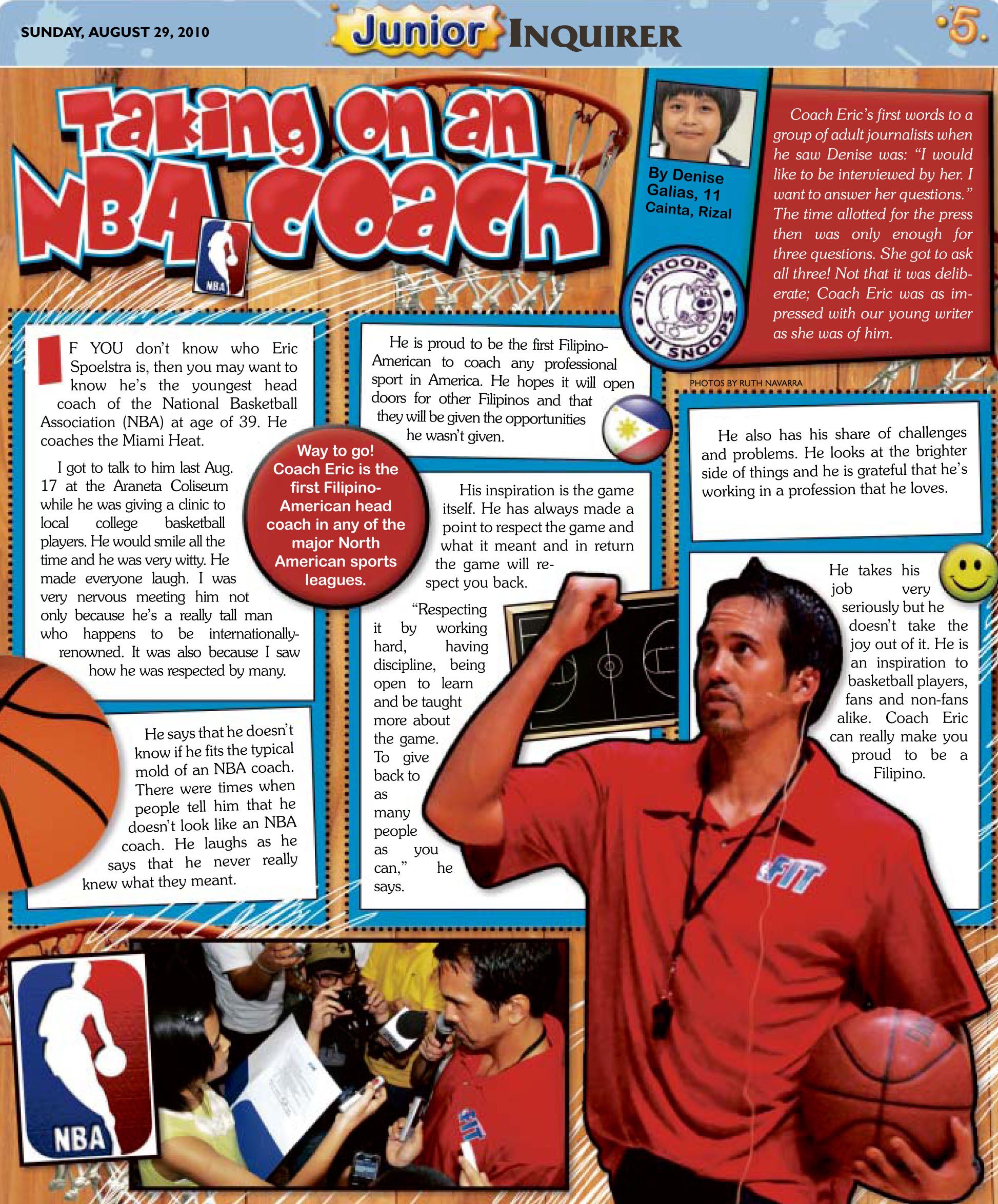 The awards will be given out on Sept. 3 in Mumbai, India, during the WAN-Ifra India conference that will include a session on strategies for youth engagement.

“This project excellently reflects enduring excellence in how it has kept the momentum going for this well-conceived, strong program over the years while maintaining a ‘freshness’ all along the way,” the jury said of the program.

“The program is not what it used to be, but the mission is still the same: Let kids write for kids. The award is a validation of how Junior Inquirer has been able to reinvent itself since its introduction 20 years ago,” said JI editor Ruth Navarra.

Junior Inquirer was launched in October 1995 as the first news magazine for children in the Philippines. Almost two years later, in 1997, the JI Snoops program was introduced. The snoops, ages 7 to 12, receive assignments, training and guidance from the JI staff for the duration of the two-year program.

To date, the program has seen more than 120 Snoops in eight batches, with some years seeing as many as 200 applicants expressing their interest to join the program.

“Not all children who go through the process of application and risk rejection want to be on stage. Some of them want to become journalists. The JI Snoops program has always welcomed those young journalists with open arms,” Navarra said, adding that the program has flourished under the guidance of JI’s past editors.

“The program was first introduced under then JI editor Natasha Vizcarra. Even back then, the importance of giving children space to share their thoughts was the top priority,” Navarra said.

“Eline Santos made sure that the program continued after Vizcarra left JI, while Grace Leung created the system of recruitment and training, which we still use now,” she added.

Navarra also credited the efforts of the other members of the JI team in keeping the program going.

“Our editorial assistant Din Villafuerte is the point person for the Snoops. She is the one kids call when they have questions, even on a weekend. Besides making their articles look cool on our pages, Liz Rañola designs things for our writers like their IDs and certificates,” Navarra added.

Snoops are given story assignments and are given the opportunity to cover events, review movies and toys and do “crazy things” for JI. “The program is for them to experience what it is like to be a journalist,” Navarra said.

“The JI Snoops are not pretend journalists. They attend real press conferences, do reviews, conduct interviews, take photos, write stories and get published. They must comply with deadlines, too,” she added.

Applicants interested to be part of the JI Snoops program undergo a writing examination and a panel interview. As a final test, they are tasked with writing an essay at home and given a deadline for submission to check for their ability to comply with deadlines and to follow instructions.

Who makes the cut?

“Children whose story ideas are out of the box. Kids who can think on their feet, are able to ask questions as they go,” Navarra said. “Those who are confident and are able to talk with famous personalities without losing their cool. Kids who love to write. Writers who can meet deadlines.”

“I became determined to become an Inquirer reporter after ending my stint with JI in 1999,” said Aurelio, who now covers the Philippine National Police beat for the Inquirer.

Two years after her JI stint, Aurelio took up journalism at the University of the Philippines and even became an Inquirer scholar before finally working for the newspaper in 2005. “My being a reporter never felt like work,” she said.

“When I was told I had gotten through the JI Snoops six years ago, I thought all I had to do was write. That thought lasted five minutes into our first workshop,” said Mary Denise Galias, JI Snoop from 2009 to 2011.

“Writing for Junior Inquirer has been an adventure! I got to meet amazing people like my co-Snoops, watch a ‘Harry Potter’ movie before anyone else and, the best part of it all, write for a newspaper!” said Erika Mina, JI Snoop from 2005 to 2007.

Writing for JI, she added, taught her a lot about a journalist’s life.

“Writing for JI entailed responsibility. I had to research, prepare questions for interviews and ensure that my articles were free from grammatical errors before submission. I am grateful for our ates for always guiding us, as we take on our responsibilities as journalists,” Mina said. “I hope that my articles inspired more kids to look for what makes them happy and pursue their dreams.”

The multiawarded JI has also been hailed by other award-giving bodies. In April 2007, JI was inducted to the Hall of Fame by the United Nations Children’s Fund and the Philippine Press Institute after being named “Best Newspaper for Children” for five consecutive years and for the paper’s “distinctive and consistent advocacy for the rights of the child.”

The top World Young Reader Prize, “News Publisher of the Year” went to Indonesia’s Kompas Daily for its multimedia approach to reaching a young audience and helping them become more active in society.

WAN-Ifra, based in Paris, France, and Frankfurt, Germany, with subsidiaries in Singapore and India, is the global organization of the world’s newspapers and news publishers.

It represents more than 18,000 publications, 15,000 online sites and over 3,000 companies in more than 120 countries. Its core mission is to defend and promote press freedom, quality journalism and editorial integrity, and develop prosperous businesses.