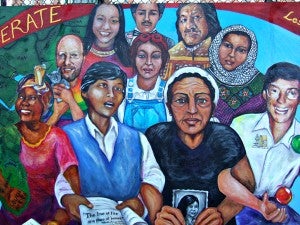 Just days after he was assassinated in Quezon City in 1987, Lean Alejandro was reborn in San Francisco.

Moved by his martyrdom, a group of artists decided to feature Lean on a mural honoring activists from all over the world.

But a few years ago, something odd happened on the beautiful painting on Masonic Avenue: It looked as if Lean’s hair had turned white. It looked as if he was getting older.

Lean would have turned 55 this year. For Filipinos of my generation, the martial law babies, those of us who grew up during the brutal reign of the corrupt dictator Ferdinand Marcos, he will forever be 27.

That’s how old he was when right-wing elements ambushed him outside his office, killing one of the most prominent figures of that era.

No, there was nothing mystical or mysterious about the aging of Lean on the San Francisco mural called “Educate to Liberate.” 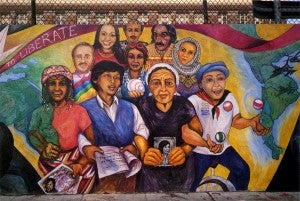 Here’s what happened: The painting was refreshed and updated in 2006, and that was when the “white hair” appeared, according to Jane Norling, a member of the Haight Ashbury Muralists who spearheaded the project.

“Lean was repainted using the original painting as a base,” she told me in 2007. “I think the white in the recent painting was meant to add depth, but it really appears as white hair. So it adds another dimension — (like) he is forever alive.”

In many ways, Lean is still alive. We still talk about him, still remember his courage and sacrifice. A few years ago, a musical celebrated his life and struggle. He even lives through the children of the martial law babies, Some of us, including me, named our children after him.

In September, Samasa, or Sandigan ng Mag-aaral para sa Sambayanan, the student party he once led at UP Diliman, will mark the 43rd anniversary of the declaration of martial law — which coincides with the 28th anniversary of Lean’s death — with a benefit run dubbed “The Great Lean Run.” The event, to be held on September 19 at 5 p.m. on the Diliman campus, will raise funds for the construction of the Liwasang Lean Alejandro on the campus.

The event hashtag is “BeLean,” making the “Great Lean Run” also a call to healthy living. Lean would have wholeheartedly endorsed that — even though, like many of us, he was a heavy smoker during our activist days in the ‘80s.

And like many of us, he’d probably have a hard time keeping up with the Pinoy millennials who’ll be attending the event to honor him.

Then again, he never really aged like the rest of us, the generation he symbolizes. In fact, many of us will always remember him with the fire and energy of the young Filipinos who will be running in Diliman to celebrate his life and times.

Lean’s was a short, eventful life, full of meaning and passion. He was the young firebrand who led to us on those many marches on Mendiola toward Malacanang, who led us in defying the brutal dictator. He was the young idealist who risked his life in the quest for meaningful social change and freedom from oppression. 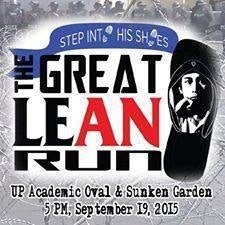 He packed a lot, accomplished a lot, in 27 years.

And in a way, he was fortunate.

He didn’t have to go through the periods of restless reflection and doubt that many of us went through (or are still going through.) He didn’t have to agonize over whether he made the right decisions in his personal and professional life, or whether he had led a meaningful existence. None of that.

His hair may have turned white on that mural in a San Francisco neighborhood — but Lean didn’t have to deal with the trials and tribulations of mid-life.

He didn’t have to make tough choices some of us had to make in the years after we triumphed over the despot who dominated our lives as children and young adults.

I can imagine him frowning over the choices some fairly well known martial law babies made — including a one-time comrade who turned into the staunch defender of a Mini-Me version of Marcos, a spokesman for a corrupt trapo now eyeing the presidency.

But then again, Lean would have been the first to point out that change and struggle are endless processes.

The movement in which he played a prominent role has gone through big upheavals, including a bitter and painful split that at times turned violent.

Many of his former comrades ended up rejecting the dogmatic, undemocratic, even totalitarian tendencies of the people who led it. That included Lidy Nacpil, Lean’s widow, who went on to work for a more democratic, open brand of progressive politics.

During the 20th anniversary of Lean’s death in 2007, Lidy even spoke candidly of Lean’s strengths — and his weaknesses. Yes, he was a hero committed to change, she said, but Lean also was tainted by the narrow machismo of the typical Pinoy male. She talked about the time he became upset because Lidy had the audacity to challenge his views in public. “Tao lang siya. He was human,” she said.

Being human, however, has not diminished Lean’s stature as a hero of our generation … and of the world.

In a way, the San Francisco mural underscores this.

The original mural showed him arms linked with other activist icons. On his right, is South African leader Winnie Mandela, ex-wife of Nelson Mandela, and on his left, a Salvadoran mother of a desaparecido (disappeared, i.e. abducted). Also in the portrait were Benjamin Linder, the American engineer who killed by U.S.-backed Contras in Nicaragua, Native American activist Leonard Peltier and the Puerto Rican nationalist Pedro Albizu Campos. 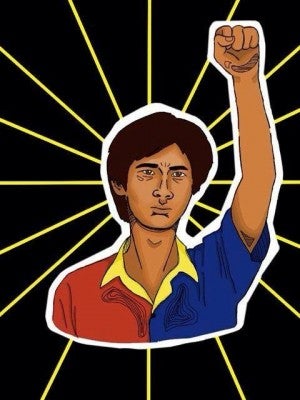 The painting included Lean’s his famous quote: “The place of honor is the line of fire.”

When the mural was revised in 2006, it was partly due to changes in the way the artists viewed the political movements and figures.

While many groups and personalities may call themselves progressive, and may be waging armed revolution while claiming to represent “the people,” in some cases, they were just as tyrannical as the despots they were fighting against.

As artist Jane Norling told me back then: “I firmly believe people have the right to take up arms for self determination as long as it’s for building justice. It’s just that I was naïve about how armed force worked.”

And this change in attitude was evident in the way the mural also evolved.

It wasn’t only Lean’s hair has changed. He is now seen also linking arms with a new comrade: Wangari Maathai, the Kenyan activist who won the Nobel Peace Prize winner for her work in empowering women, battling corrupt officials and planting millions of trees in ravaged lands in Africa.

The artists painted Maathai’s image over that of Winnie Mandela, who was by then a controversial figure. Once an icon of the anti-apartheid struggle in South Africa, she was later painted as an abusive political figure who used her power for personal gain. In other words, Norling said, Mandela had become an “outdated and complicated” figure.

On the other hand, in the eyes of the San Francisco artists, Lean’s heroism and commitment remained relevant and clear.

He was deemed deserving of the honor of remaining on that beautiful, historic mural. He wasn’t painted over. He didn’t die.

[For more information on the Great Lean Run, check out the event’s Facebook page.]