Shortly after the crack of dawn on Sunday, upbeat Latin music played in the inner streets of Mandaluyong City, with thousands of men, women and children sweating it out and dancing.

Among the thousands who lined F. Martinez Avenue in Barangay (village) Addition Hills was Lydia Ribon who, despite having had less than three hours of sleep, was proud of herself and her neighbors for they were part of history as the city took home on Sunday the Guinness World Record for the largest Zumba class in one location.

Mandaluyong clinched the title from Cebu City, who held the honor for only nine months.

“It’s an unbelievable effort by the city itself to organize such an attempt in a short space of time,” Pixsley said as he congratulated Mandaluyong for being the new Guinness World Record titleholder.

In March, the city had a simultaneous Zumba session as part of its Women’s Month celebrations. The activity, which was not a Guinness World Record official attempt, was able to gather around 26,000 women in an hourlong Zumba session, according to the city’s public information office. 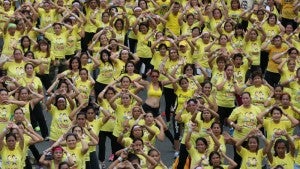 WORLD RECORD People dance in the streets of Mandaluyong City to clinch a Guinness world record for the largest Zumba class of 12,975. AP

Zumba is a Latin-inspired dance exercise whose classes are held in 200,000 locations worldwide. Every week, an estimated 15 million people attend a Zumba class, according to a recent Inquirer report.

While it was only her second time to join a Zumba session, the 63-year-old Ribon told the Inquirer that she was very excited to join Sunday’s activity that she was up and about as early as 2 a.m.

Ribon, whose makeup didn’t seem to fade after her exercise, said she learned of the Latin dance exercise only a month ago and decided to join Sunday’s event because “it’s fun and good for your health.”

She added that she was planning to join Zumba classes in her barangay in the coming weeks.

Like Ribon, siblings Jollie and Marife Gayoso couldn’t contain their excitement. They were at the venue around 3 a.m., or three-and-half hours before the start of the event.

The siblings, who started doing Zumba in 2011, said the exercise formed part of their bonding.

“It’s a way for us to de-stress and it also helps us achieve our goal of having a healthy lifestyle,” Marife said. She and her sibling join Zumba classes in their barangay at least thrice a week.

One of the major organizations that spearheaded the event was Kababaihan Kakaiba ng Mandaluyong.

Wilfredo Lopez said men should become active in Zumba, noting that the activity was “enjoyable that you won’t notice the time.”

More than being a record-breaking event, it highlighted the importance of having a holistic approach to a healthy lifestyle, Mayor Benhur Abalos said.

“It’s not enough that you eat healthy food. You must also exercise regularly,” said Abalos, who turned 53 on Sunday.

He said he hoped the activity would become an annual affair as a symbol of Mandaluyong’s healthy lifestyle, noting that it need not be another world record attempt.

Apart from continuing support for the fitness program, which started four years ago, city officials are looking into conducting a study of Zumba’s health effects on residents, especially those who have heart ailments and diabetes, according to Abalos.

While the official count was lower than the expected turnout of 30,000, Abalos said all the participants came of their own accord.

“They want to champion a healthy lifestyle. You can’t bring in that such huge number of crowd unless they believe in the advocacy,” he said.

Why Zumba is an effective exercise program