John McCain, other US lawmakers back PH 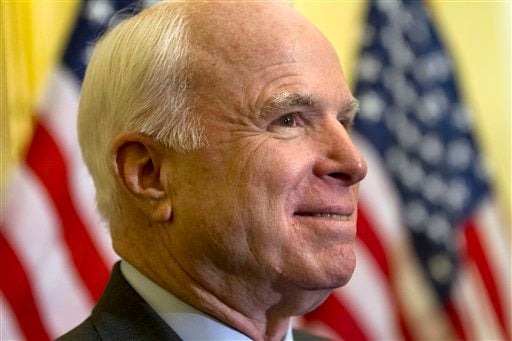 Four United States senators on Friday urged their government to help the Philippines and other Southeast Asian countries toughen up their naval capabilities in the face of threats from regional giant China.

US Senators John McCain (Republican-Arizona), Jack Reed (Democrat-Rhode Island), Bob Corker (Rep-Tennessee) and Ben Cardin (Dem-Maryland) released a statement on Friday lauding efforts by the Philippines to peacefully resolve the maritime disputes in the South China Sea, but at the same time calling for the US to “take the necessary steps to sustain a balance of power that will continue to uphold peace and stability throughout the region.”

“Given the pace and scope of China’s military trajectory, we believe this will demand a sustained investment in our military presence in the Asia-Pacific region,” the senators said.

The five-member UN arbitral tribunal heard the arguments last week of the Philippines’ legal team on why the court should assume jurisdiction over the case.

In initiating the arbitration case, the Philippines is seeking clarification of its maritime entitlements in the 370-kilometer exclusive economic zone in the West Philippine Sea, which is encompassed by China’s nine-dash-line claim on practically the entire South China Sea.

“If the court chooses to consider the Philippines’ case, it will then make a ruling on the legality of China’s vast and, in our view, questionable claim sometime next year,” the senators said in a joint statement e-mailed by the Philippine Embassy in Washington, D.C. to Manila reporters.

“Although the United States does not take a position on the competing claims, we applaud Philippine President Benigno Aquino III and his government for his commitment to pursuing this legal course of action,” the US senators said.

The four senators have been vocal against China’s island-building activities in the South China Sea, expressing alarm early on and urging the US government to come up with a formal strategy to stop China’s land reclamation.

“While China is constructing and militarizing new land features in the South China Sea and increasingly turning to coercion to achieve its goals, we are encouraged to see that Manila continues to make every effort to resolve these claims peacefully, consistent with international law, and through international arbitration mechanisms,” the senators said.

The senators urged United States to help by toughening up the navy capabilities of the Southeast Asian nations, including the Philippines.

“This requires not only routinely exercising freedom of navigation and overflight activities in the East and South China Seas, but also bolstering the maritime capabilities of South East Asian nations and conducting joint exercises and patrols,” the senators said.

In May this year, a heated confrontation took place between the US and China armed forces when a US surveillance plane flying over China’s artificial islands in the South China Sea was warned by China to leave the airspace at least eight times.

The US Pentagon has vowed to defy the claims of China in the South China Sea through air and sea patrols.

US ups pressure on China with West Philippine Sea overflights