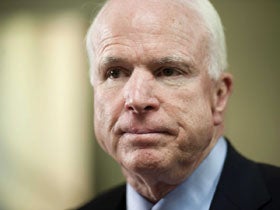 WASHINGTON, DC — Alarmed by China’s reclamation and building binge in disputed reefs and rock outcroppings in the South China Sea, ranking US Senate leaders are urging the Obama administration

to strengthen ties with America’s

Asian allies by providing additional military equipment to their navies.

and saying, ‘Look, this is not acceptable.'”

imagery showing the massive extent of Chinese infrastructure building in several areas, some of them within the Exclusive Economic Zones of neighboring countries

One photograph revealed that China is building what looked like a 10,000-foot-long runway capable of handling military aircraft in Fiery Cross Reef, part of the Spratly Islands, which are claimed by at least three other countries

analysts fear these facilities could easily be converted for military use for Beijing to project its military muscle in the disputed territories.

partners in the area.

“We got to the conferences that they hold, but there needs to be a much more organized pushback in the international community, it’s just not occurring right now,” Corker was quoted

by the Washington DC-based The Hill as saying.

China is claiming 90 percent of the resource-rich South China Sea, including maritime areas close to the shore of smaller Southeast Asian neighbors Brunei, Malaysia, the Philippines, Vietnam and Taiwan. The disputed areas encompass some of the most world’s strategic sealanes through which $5 trillion ship-borne trade pass through yearly.

Catapang’s comments come as the Philippines embarked on its latest “Balikatan” joint military exercises with the U.S. involving 11,000 troops, the biggest in 15 years.

Speaking ahead of the war games

that latest evidence of land reclamation gave “compelling reasons to raise our voice to tell the whole world the adverse effects of China’s aggressiveness.”

He said the “massive reclamations activities

” are causing tension among claimant countries

because of the possibility that the construction located more than 600 miles to China’s nearest landmass could be used for “military purposes.”

The U.S. ambassador to the Philippines, Philip Goldberg reiterated in the same press briefing America’s

U.S. would “defend the important principles of freedom of navigation in the air and the sea”.

The 10-day drills are being held mostly in Zambales province and Subic Bay, facing the South China Sea. Subic Bay was the site

of the former Subic Naval Base, once the biggest U.S. military installation

At a recent Senate hearing, McCain expressed dismay with the way China, Asia’s leading economic and military power has been flexing its muscle in the South China Sea.

Beijing is also embroiled in a simmering territorial dispute in the East China Sea with Japan, another close U.S. ally, over uninhabited islands administered by Japan known as Senkaku in Japan and Diaoyus in China.

“I believe China can and should play a constructive role in the Asia-Pacific region,” McCain said at that posture hearing on the U.S. Pacific Command and U.S. Forces in Korea.

“Unfortunately, in recent years, China has behaved less like a ‘responsible stakeholder,’ and more like a bully.”

was evident in its massive reclamation in disputed reefs and rock outcroppings located within the Exclusive Economic Zones of its smaller neighbors, like the Philippines.

on multiple islands across the Spratly chain, and the potential command and control, surveillance, and military capabilities it could bring to bear from these new land features, are a challenge to the interests of the United States and the nations of the Asia-Pacific region,” he warned.

He added that these “unilateral efforts to change the status

quo through force, intimidation, or coercion threaten the peace and stability” the region has enjoyed for 70 years.