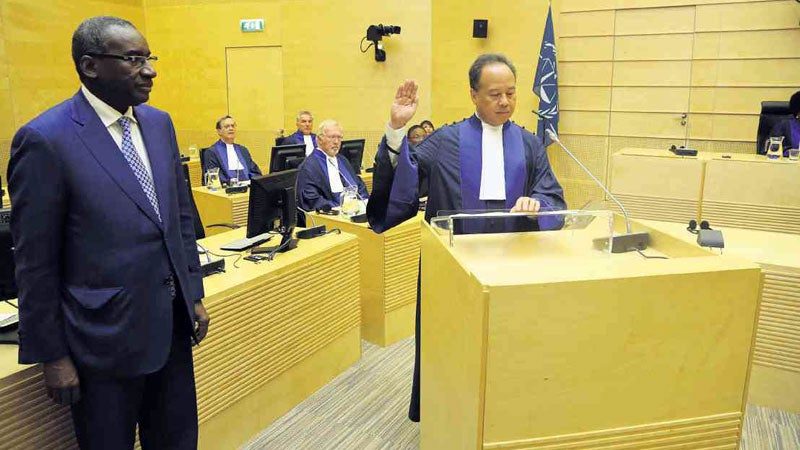 SWORN IN AS ICC JUDGE Inquirer publisher and former dean of the University of the Philippines College of Law Raul Pangalangan is sworn in as a judge of the International Criminal Court (ICC), in ceremonies held on Monday at the ICC headquarters at The Hague in the Netherlands. In a statement posted on the ICC website Tuesday, Pangalangan swore before the Assemblies of States Parties president and Senegal minister of justice Sidiki Kaba (left), to undertake his duties at the ICC “honorably, faithfully, impartially and conscientiously.” ICC-CPI

Inquirer publisher Raul Pangalangan has been sworn in as a judge of the International Criminal Court (ICC) in ceremonies at The Hague in the Netherlands.

Pangalangan, a former law dean of the University of the Philippines, made a solemn oath in open court on Monday before Senegal Justice Minister Sidiki Kaba, president of the Assembly of States Parties, the ICC’s governing body, according to a statement posted on the ICC website on Tuesday.

“I solemnly undertake that I will perform my duties and exercise my powers as a judge of the International Criminal Court honorably, faithfully, impartially and conscientiously, and that I will respect the confidentiality of investigations and prosecutions and the secrecy of deliberations,” Pangalangan said in the oath he recited.

In welcoming Pangalangan to the court, Kaba said: “[You are] joining the small and prestigious group of eminent judges who have the formidable honor and difficult responsibility of putting into practice the spirit and the letter of the Rome Statute.”

The ICC is an intergovernmental organization and international tribunal that sits in The Hague. It has the jurisdiction to prosecute individuals for the crimes of genocide, crimes against humanity and war crimes.

The Rome Statute is the international treaty which is the ICC’s foundational and governing document. There are currently 123 states that have acceded to the Rome Statute and are therefore members of the ICC.

Kaba said the ICC sought “to deliver justice on behalf of the peoples of the world and to ensure that the most serious crimes affecting the international community as a whole do not go unpunished.”

“You thus have an historic opportunity to play a part in the establishment of sound case law, the cornerstone of justice that is recognized and accepted,” he told Pangalangan.

“I have no doubt that Dr. Pangalangan will make an important contribution to the work of this court. I hope this will encourage more Southeast Asian states to join the ICC, and to become members of a global system to punish and help prevent the most serious crimes of concern to the international community as a whole,” Fernández said.

Pangalangan, who remains the Inquirer publisher, was elected to fill the seat vacated by Sen. Miriam Defensor-Santiago, the first Filipino and Asian to be elected a judge of the ICC.

Santiago was elected in December 2011 but resigned on June 3, 2014, after she contracted lung cancer. Her nine-year term would have started in March 11, 2012. Pangalangan will hold office until 2021.

Those who attended Pagalangan’s swearing-in were the ICC judges, ICC deputy prosecutor James Stewart and ICC registrar Herman von Hebel, together with a number of diplomats and representatives of other international organizations in The Hague and members of civil society.

The International Criminal Court has a bench of 18 judges who are nationals of states parties to the Rome Statute.

According to the ICC website, judges are chosen from among “persons of high moral character, impartiality and integrity who possess the qualifications required in their respective countries for appointment to the highest judicial offices.”

Read Next
Renters rally behind SF official’s anti-eviction measure
EDITORS' PICK
Is your company a growth champion? Stand up and be recognized!
New Year, New Rediscoveries
PNP’s Covid-19 cases jump to 9,809; 52 new infections logged
Acer Philippines welcomes you to its first flagship store
Pope Francis to miss events due to new flare up of leg pain—Vatican
More than 150 National Guard in Washington for Biden inauguration test positive for coronavirus
MOST READ
Ellen DeGeneres, too, is baffled by viral Filipino soda ad
Why Kris Aquino sleeps with her pearls
Dustin Poirier knocks out Conor McGregor at UFC 257
AFP to apologize to UP alum falsely included in list of NPA members — Lorenzana
Don't miss out on the latest news and information.