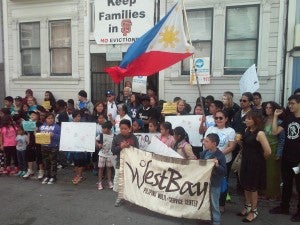 SAN FRANCISCO — “Stop the evictions now!” was the cry of the ralllyists who converged in front of the Natoma Street building whose mostly Filipino residents faced eviction last month.

The rally, joined by young students, south of the market tenants and residents, members of cause-oriented groups and other advocates, was held to support District 6 Supervisor Jane Kim’s Tenant Eviction Protection 2.0, a comprehensive set of provisions to correct loopholes and upgrade existing eviction procedures in San Francisco’s rent control ordinance.

The demonstrators pressed for the passage of the Kim’s measure, saying the fight was not over even after the 521-523 Natoma Street residents fought and defeated the eviction attempt of Evan Matteo and Big Tree properties.

Rally leader Angelica Cabande, organizational director of the South of the Market Community Action Network (SOMCAN), lamented the ongoing trend in San Francisco where landlords evict tenants through loopholes in the eviction process to make more money at the expense of elders, disabled persons and children. 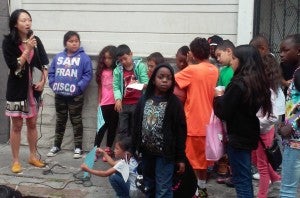 “We have to continue fighting not just for the tenants of Natoma, but for the whole South of the Market, the whole San Francisco, the whole Bay Area. We need to protect tenants’ rights,” Cabande asserted. “We need protection for tenants so that landlords will stop harassing tenants by finding little loopholes and minor things.”

In her speech, Kim lauded community efforts in saving the 521-523 Natoma building’s residents from eviction. “After the city negotiated with the community, an unprecedented fund now called the South of the Market Stabilization Fund helped purchase the (521-523) Natoma building behind us today so that we can keep our families, our residents, our seniors here at the South of the Market

“The money also provided seed funding for the United Players clubhouse behind us in Howard Street, to help fund youth programs, to help fund after-school programs at West Bay, among others. All of these things came forward because the community fought for that,” Kim added. 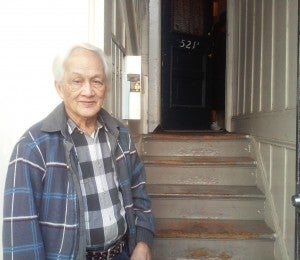 Paquito Nacional, 83, was nearly evicted from his home of 25 years.

Turning to her latest piece of legislation, Kim said that Tenant Eviction Protection 2.0 came directly from tenants who found loopholes, usually minor infractions, that are being used as bases for evictions by landlords.

“For flimsy reasons, such as hanging their laundry outside their windows, leaving their bikes in the hallway or a baby stroller in the lobby, property owners capitalize on cited minor breaches of contracts and use them as reasons for evicting the tenants for profits,” Kim explained.

“This legislation will close that loophole as the landlord needs to prove that the tenants have done the breach and that they gave the tenants enough time to correct whatever violations the tenants might have done. Also, the measure provides that language-appropriate notices be given the tenants when they get evicted to ensure that tenants fully understand what are stipulated on the notices.”

Another feature of the measure prohibits rent-control property owners who caused eviction due to owner move-in, condo conversion, capital repairs, etc. to raise the rent on the next tenant after an eviction.

Filipino children at the anti-eviction rally.

“They could only rent at the same price that the old tenant was paying to ensure that repairs and improvements are being done simply for reasons given and not to speculate on the market price of the property. That speculation and greed are not the reasons,” Kim assured.

Reacting to reports that she may not have enough support in the city to have the measure pass, Kim disclosed that there were now three other co-sponsors in Supervisors David Campos, John Avalos and Eric Mar and she was confident of getting at least five board members.

Kim stressed that the community needed to come out in full support of the measure on the next board of supervisors meetings to tell the board why this legislation is so important.

“This is my neighborhood. I live in south of the market just a block away from here. And it is really important that we protect our neighborhood, our families and our seniors,” Kim emphasized. “I am really proud that the city was able to work with several organizations and foundations to purchase this building to keep our residents in place. it is really important that San Francisco stay diverse with nonprofit workers, nurses, construction workers and janitors living side by side in the city.” 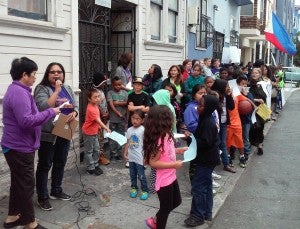 “I am one with the residents of the SoMA who were facing eviction. and I can feel the pain and stress being suffered by those being evicted directly because I myself have been evicted. It is not easy being evicted. The suffering, the pain, the agony of not knowing where you are going to live next is very, very difficult.”

Araullo said further: “So I am one with this community that is fighting to make sure that the families stay in San Francisco and also fighting to make sure that families in other part of the Bay Area who are also suffering the same fate stay and are able to enjoy the same right hopefully. We are so lucky here in San Francisco to have tenant’s rights and also to have supervisor Jane Kim advocating for even more rights so that more evictions can be prevented.”

A longtime resident of Natoma Street, 83-years-old Paquito Nacional who has lived with his daughter and her family of four for 25 years also recounted their share of grief in not knowing where to go after a notice of eviction was handed them.