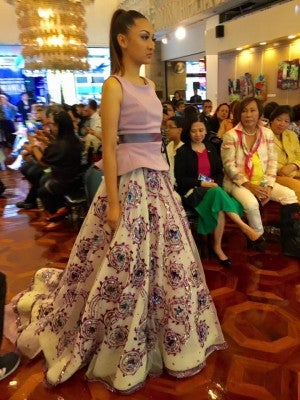 NEW YORK CITY—Philippine fashion icon Renee Salud’s show for his latest collection dubbed #TatakSaludNYC was so successful there had to be an encore July 1 at the Philippine Center here.

Over 100 of Salud’s dresses and gowns were showcased at the first show in New Jersey, while the encore in New York featured about 25 pieces.

“This is the first time that Renee’s creation was featured here in the Center and we’re proud of it,” Consul General Mario de Leon told INQUIRER.net. “It gives you a very good glimpse of what he has for the world to see.”

The audience was visibly impressed by the fusion of old and new in Salud’s latest collection. Made of traditional fabrics and decorated with intricate beading, the dresses were stunning yet relevant to the times.

“To show my love for the country, I advocate the usage of the indigenous materials in all of my fashion shows,” said the veteran designer Salud. “I see to it that in my collection, whether in the Philippines or abroad, I also project the image of the Philippine fashion and the Philippine look.”

According to Salud, it took him more than six months to assemble the entire collection. When asked what kept him going, he alluded to his passion for fashion and his love for the Philippines.

“I see to it that I do ethnic clothes with international appeal—that’s how I envision. I incorporate the old school and new school of fashion. My inspiration is the Philippines and the Filipino people,” he said.

The outcome is timeless fashion, according to longtime colleague Raymond Villanueva, a seasoned fashion director.

“Fashion is always about moving on, but I believe fashion also moves on to be timeless,” explained Villanueva, who has been working with Salud for nearly 20 years.

“I’ve worked with a lot of designers in the Philippines. With Renee Salud, ang importante kasi maganda ang Pilipina [the beauty of the Filipina is what’s important]. That has always been his main essence because when you’re beautiful, the clothes are more beautiful,” Villanueva added.

He said further: “Renee has always proven that even if my clothes are modern or edgy or couture or Filipiniana, the most important is kindness. When you move from each generation, I think he has done that—like if you notice from the collection, you can use piña with shorts; you can use piña with the basic shift dress. That makes him more interesting as he progresses in time.”

During a runway show, the most important, according to Villanueva, is the blending of characters, especially when real people join the professional models onstage. “It’s always a challenge to use real people, but I make sure that I’m here at least a week before the show so I could get to know everybody.” 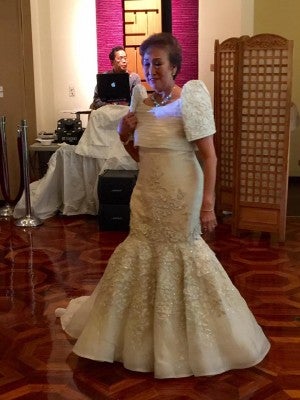 The show at Philippine Center featured professional models and members of the Filipino community who proudly wore their elegant Tatak Salud pieces.

“Renee’s show today was really outstanding because he was able to connect the traditional Philippine terno with modern style so that it’s very practical—they can use it three different times, meaning you take off the bolero and then you have one design, you take off the top put another one and you have another design,” philanthropist Loida Nicolas Lewis told INQUIRER.net.

“And for the modern evening gown, they are simply spectacular because not only did they capture the silhouette but also the combination of the materials, [including] the appliqués, enhances without being overdone,” Lewis gushed. 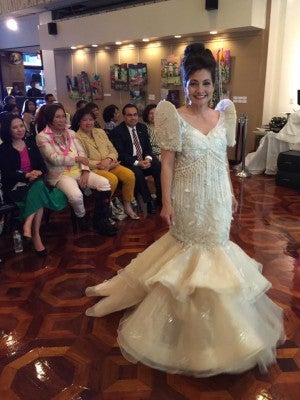 Aileen Reyes in a couture terno.

Lewis mentioned that when her daughter got married four years ago, she wore a modern saya especially made for her by Salud. “I went to his shop, he had something for somebody else but within one week he was able to do mine. He made me a modern saya but beautifully done.”

Fellow designer Izza Dungca, who is based in New York, said that she has long admired Salud’s design aesthetic. “When he does his Filipiniana, they’re very, very intricate in terms of embroidery,” she said. “I love the fact that the materials from the Philippines like the tinalak, the jusi and also the embroideries from Batangas—they call it callado—it’s very intricate.”

Dungca described Salud’s latest collection as all-embracing. “I’ve seen a lot of designers that does Filipiniana and they’re like stuck in the Philippines. It cannot be international. This collection—anybody can wear it,” she said.

Everything looked stunning and elegant but the crowd’s most favorite was the piece worn by Dr. Elma Castillo, an off-white Maria Clara that Dungca believed was embroidered in Batangas. “That’s a Tatak Salud! That type of intricacy, beadwork and design, very Salud,” Dungca said.

Choreographer Erno Hormillosa noted that the Maria Clara piece took one year to make with its heavy beadwork. “His collection is very unique, authentic and one of the most elegant designs,” he added. “What separates him from others is that his collection is really couture for each individual customer. He combines the authenticity and modern elegance as shown in the last part of his collection—it created a great metamorphosis of fashion.”

“The dresses were a lot more tropic than I thought—they’re actually dresses that I would wear,” said Rachelle Ocampo, host of Makilala TV and former president of Pilipino American Unity for Progress, an organization that seeks to transform students and young professionals of Filipino descent into community leaders.

Gail Banawis, who modeled for a second time for Salud, said she loved his Barong collection for women. “I’d love to purchase some for myself but I think they’re sold out.”

“Renee is our fashion ambassador in the Philippines and we wanted to be able to showcase his creation because our Filipino community is very Filipiniana in so many ways,” Myrna Gutierrez, the show’s co-producer, told INQUIRER.net. 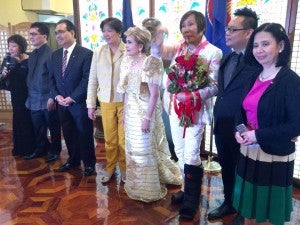 “We take pride because Fil-Am Who’s Who’is not just a magazine, we also do events and we thought about this as a good example. We wanted this to be the beginning of our events presentation to the community,” said Gutierrez, who organized the fashion show together with husband, Rolan, Dr. Prospero Lim and Olivia David.

While it took awhile for Salud to establish a niche in the market, Gutierrez said it was worth waiting for.

“Now a lot of designers are realizing the importance of loving what is ours, what is Philippines. When you say Tatak Salud, it’s not only barong and Maria Clara and terno—it’s the Filipino designer,” Salud said.