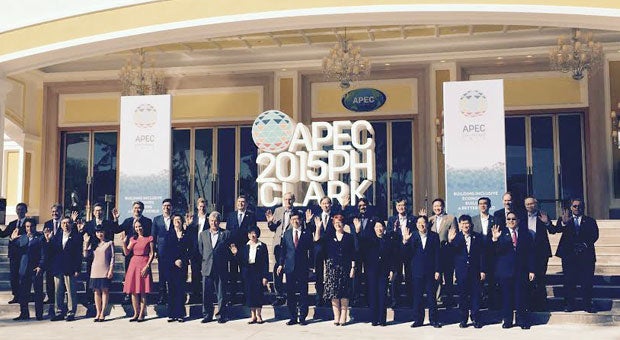 Senior Officials of the 21-member countries of the Asia-Pacific Economic Cooperation pose for a formal picture during the opening of the First Senior Officials’ Meeting in Clark, Pampanga. Nestor Corrales/INQUIRER.net FILE PHOTO

Saying that they were “just complying with international conventions to protect visiting heads of state,” the Metropolitan Manila Development Authority (MMDA) defended its purchase of 10 Suzuki big bikes, saying these would be used not for show, but to escort the 23 visiting dignitaries and heads of state for the Asia-Pacific Economic Cooperation (APEC) summit this coming November.

During the agency’s weekly radio show on Sunday, MMDA Chairman Francis Tolentino said that as host country, they have been bound by existing diplomatic and international conventions to provide adequate security measures for visiting heads of state.

“The MMDA is part of the APEC [National] Organizing Committee and our duty is to escort high-ranking officials who will participate in the APEC meet,” he said.

The bikes, Tolentino clarified, were funded by the APEC. The two Ducatis have already been used in securing Pope Francis’ convoy during his recent visit to the country.

The MMDA chair said the bikes that MMDA would deploy were not even enough as APEC requirements set at least six bikes for each visiting head of state.

“We will be hard-pressed to repair and restore old bikes,” he said.

Together with the Philippine National Police (PNP), the MMDA has been tasked by the APEC National Organizing Committee with providing traffic security assistance and ensuring high-speed travel for the heads of state and officials.

As all heads of state would come from the Ninoy Aquino International Airports (NAIA) and would use the Skyway, which requires at least 400cc motorcycles, their old fleet of motorcycles and scooters would simply not do, Tolentino said.

“We will not be allowed to pass through the Skyway with 100cc bikes or scooters. The Skyway requires at least 400cc [motorcycles], while international standards for escort requires 600cc and above,” he said.