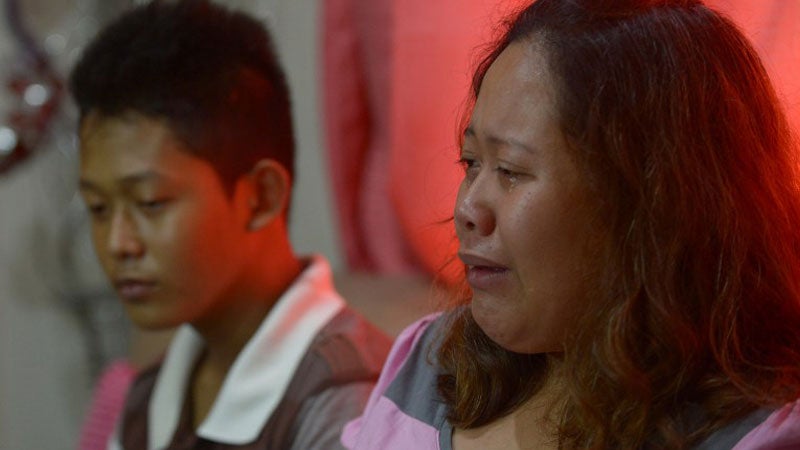 This photo taken on June 8, 2015, shows Reynaldo Nilo (left), 17, looking on with his sister Sarah Joy Nilo, 25, in an interview with AFP at a relative’s house in Manila. A cocktail of fear, hope and gratitude bubbled inside Reynaldo Nilo’s feeble heart as the Philippine teenager prepared to take his first-ever plane ride for a journey to Sudan aimed at saving his life. AFP

KHARTOUM, Sudan – A dressing covers the scar where surgeons cut open Reynaldo Nilo’s chest for life-saving heart surgery, but the Philippine teenager feels stronger than he has for years after his operation in Sudan.

The 17-year-old arrived in Khartoum last month after his sister saw a television report about a hospital run by an Italian medical charity that offers free treatment.

BACKSTORY: PH teener off to Sudan for life-saving surgery

Sitting in his spotless hospital room, his voice still hoarse after his five-hour surgery on June 16, Reynaldo said he was on the mend.

“I am feeling better, not like before. I feel stronger,” he said, smiling weakly as he sat up on his bed, his sister Sarah Joy by his side.

Reynaldo, the son of impoverished farmers, dropped out of school two years ago after developing rheumatic heart disease.

He had strep throat as a child which developed into a deadly heart condition because it was not treated with antibiotics.

Distraught that the family could not afford the $25,000 (22,500 euro) surgery at the hospital near their home in the north of the Philippines, Reynaldo’s sister spotted the opportunity that saved his life.

Sarah Joy, 25, who had become his full-time carer, saw a television report on a documentary featuring Gino Strada, the surgeon who founded the humanitarian organization Emergency during the Rwandan genocide in 1994.

“I saw it on CNN that Dr. Strada performs open heart surgery for free,” she said. “I found hope again.”

After contacting Emergency by email and telling the charity about Reynaldo, they agreed to treat him for free.

When Turkish Airlines offered to cover the flights for Reynaldo and his sister, they prepared to travel for the surgery, but not without worries.

“We were afraid because they also said if he did not survive the operation, he would be buried here in Sudan,” she said, wiping tears from her eyes as she spoke.

“But there’s nothing we could do but to take the risk.”

Sarah Joy and her brother were also anxious about travelling to Sudan, knowing little about the country apart from reports of war and sickness on the news.

“At the start I was nervous because of Ebola,” she said.

Although Khartoum is Ebola-free, it is an unlikely location for a state-of-the-art heart hospital.

The Salam Centre is an outpost of neat buildings and greenery amid squat mud brick houses and scrubby wasteland covered with litter.

Emergency picked the site after being offered the land by Sudan’s health ministry and opened the Salam Centre in 2007. Since then it has carried out 6,800 heart operations, funded by the Sudanese government and international donors.

“We want just to help poor people that maybe they can die because they cannot pay,” the 42-year-old surgeon from Rome said.

“This is the point of Emergency”.

Dressed in a red t-shirt and with a beard, Salvati was relaxed as he talked, but is used to working long days operating on patients brought in from across Sudan and Africa.

The patients are selected in screening missions and once picked, the treatment is free.

In the ward across the corridor from Reynaldo, Ismail Omer Ismail is recovering from the same surgery.

The 25-year-old labourer from Omdurman had been off work for two years because of his condition.

“In this country we treat all the patients, poor and rich,” Salvati shrugged.

Patients are given support once they leave the hospital too. If Reynaldo cannot afford the medication he needs for the rest of his life, Emergency will provide it.

The hospital itself is also designed to help patients make a speedy recovery. Designed by an award-winning team of Venetian architects, it includes lush gardens to give recuperating patients somewhere to relax.

Reynaldo is looking forward to returning home once he has rested in the hospital guesthouse.

“I’m just very happy because I have a second chance in life,” he said.