‘Breaking News’: Apple will not move its China plants to PH 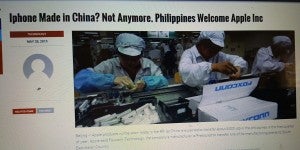 Newsgru.com unwittingly published a fake news report claiming Apple Inc. was moving its plants from China to the Philippines. SCREENGRAB FROM NEWS GRU

Apple executives in Cupertino, California may be shaking their heads wondering how the rumor even got started. For the record, they will emphatically declare that they have never, ever contemplated moving any of their highly profitable industrial plants in China to the Philippines.

Apple, Inc., the first U.S. company to be valued at over $700 billion, with annual revenue of  US$182 billion, will explain that it does not actually own any manufacturing plants in China. It has a partnership agreement with its main supplier, the Foxconn Technology Group, which assembles an estimated 40 percent of all the smart phones, computers and other electronic gadgets sold around the world including all of the Apple products.

Apple, Inc. will vehemently deny any involvement in Foxconn’s management of its plants in China, which was featured in a New York Times article on January 25, 2012 (“In China, Human Costs Are Built Into an iPad”) that reported that Foxconn workers at Apple plants in China routinely worked 60 hour weeks, six days a week and were not adequately paid for overtime, according to Apple’s own investigation. The article further reported that working conditions were so bad that at least 18 Foxconn workers attempted to commit suicide at its Apple plants. Foxconn responded to the suicide threats by constructing safety nets around its plants to prevent workers from jumping to their deaths.

Despite the notoriously poor working conditions at Foxconn plants in China, the Philippines still welcomed Foxconn representatives who visited the Philippines in August 2014 to “mull” over the possibility of setting up at least one assembly plant somewhere in the Philippines.

On November 7, 2014, the news of Foxconn’s interest in “looking a closer look” at the Philippines appeared in the Manila Bulletin written by Bernie Magkilat (“Apple supplier Foxconn mulls a manufacturing facility in PH”).

“They are looking into several areas and they have lots of considerations, including fung shui,” the article quoted Amadeo R. Perez Jr., chairman of the Manila Economic and Cultural Office (MECO), who informed reporters that Foxconn officials had visited various ecozones, including the country’s Freeport zones Subic and Clark, and Calabarzon areas such as Batangas, Laguna and Cavite. 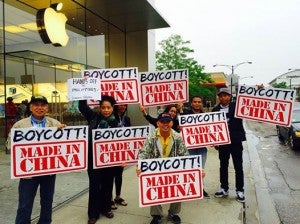 The Bulletin article reported that Foxconn employs 1.2 million people at its China facilities, producing the Mac mini, the iPod, the iPad, and the iPhone for Apple Inc. and other computer products for other companies and that it was “mulling about relocating some of its capacities outside of its production hub in mainland China due to rising wage rates and shortage of available workers.”

Other than the Manila Bulletin, no other news media in the Philippines or internationally reported on Foxconn’s exploration of the Philippines as a possible relocation site for the manufacture of any of its products.

It is not certain how many people actually read the Bulletin news article, but it is certain that it was read by a creative writer at Tahonews.com, one of the burgeoning online Philippine satirical websites that provide younger more tech-savvy Filipinos with alternative fake news.

On December 2, 2014, a writer named “niel” posted on Tahonews.com his news article entitled, “Philippines to Manufacture Apple Products, Transfer from China.” This is what appeared in the article: 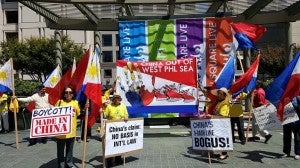 “Apple products will be soon made in the Philippines, as China is expected to transfer over 8,000 jobs to the country as a start. This is after Apple, Inc. reportedly pressured Foxconn Technology Group, the company’s major manufacturer, to transfer one of its manufacturing plants to another Asian country.

In a short press conference led by Apple CEO Tim Cook this Monday, he said both companies have chosen the Philippines to be new manufacturer of some vital components of their iPads and iPhones for various reasons. Mr. Cook mentioned Filipinos as very hardworking and can speak English fluently.

“We received tons of positive feedback about Filipinos working in factories in the Philippines and abroad. We are very confident that they can produce high quality products for Apple.” Tim Cook told reporters, noting that they are now in talks with the Philippine government and industrial estate developers.

According to Jorge McDough, Apple’s director for manufacturing, the new Apple facility will be at the Light Industry and Science Park IV (LISP) in Malvar, Batangas. Construction of the first building is set to start in April 2015 and expected to finish in November 2015. Announcement of hiring is being expected soon.

Surprisingly, this piece of clever satirical fiction did not generate any traction in the local media as none of the media outlets reported it.

Five months later, however, another online website, newsgru.com, picked up the Tahonews article and posted it in its entirety (with a few minor paragraph adjustments) on May 28, 2015 without attribution to its fake news source. Since newsgru.com is not known as a satirical online website (like adobochronicles.com), it was accepted as true by many.

While this breaking news still did not entice CNN, the Wall Street Journal or the Philippine Daily Inquirer to bite the hook and report it as real news, it went viral on Facebook attracting 14,500 downloads.

When the U.S. Pinoys for Good Governance (USPGG.org) announced plans to call for a June 12 Independence Day picket of Apple stores in the United States to protest China’s invasion and occupation of 7 Philippine shoals, some USPGG members protested.

One member emailed the Tahonews.com article along with his complaint: “Why are we demonstrating against Apple when in fact it has already made a major move against China by transferring operations to the Philippines? 8000 jobs will be transferred to the Philippines in the manufacture of IPads and IPhones this November. Its construction of huge plants was already initiated last April 2014. Please see attached article.”

“It seems that Apple has become aware that China treats its workers badly and the fact that the Chinese are illegally pirate producing Apple products as they do with other companies’ products.”

“Our demo at this point should be against China and not against Apple which is already doing the right thing. It is misdirected if we demonstrate against Apple. They might resent it. It’s senseless to do that.”

After it was pointed out that Tahonews.com is a satirical website that publishes fake news, there was outrage that such satirical websites can be allowed to fool people. It was explained that’s their purpose. If they can’t fool people, then they’re not doing their job.