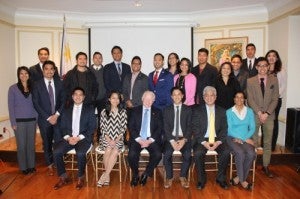 Former FYLPro delegates and applicants at a webinar hosted by the Philippine Embassy on in March 2015. They were joined by Ambassador Jose L. Cuisia, Jr. and Consul General Emil T. Fernandez. PH EMBASSY PHOTO/IVAN GONZALES

WASHINGTON, D.C. — A Google Engineer, a designer for Apple and a New York restaurateur are among 10 “high-performing” young Filipino Americans who will embark on a leadership immersion program to the Philippines to meet with influential personalities and deepen their understanding of issues affecting the country.

Freddy Anzures, a designer for Apple Inc; Kevin Gabayan, a software engineer for Google Inc; and Nicole Ponseca, CEO and proprietor of Jeepney Filipino Gastropub and Maharlika Filipino Moderno in New York, are three of the ten outstanding Filipino American delegates to the 4th Filipino American Youth Leadership Program (FYLPRO) from July 2 to 9 in Manila.

The unique program allows Filipino Americans who are leaders in various communities in the United States to meet and dialogue with the highest officials and policymakers in the Philippines, media, cultural experts, business executives, social entrepreneurs and innovators in different fields.

Ambassador Jose L. Cuisia, Jr., who started FYLPRO in 2012 as a way to further engage high-performing next-generation Filipino Americans, wished the delegates luck as they travel to the Philippines for the program.

“I am proud of these ten young leaders who are already affecting change in their respective spheres of influence. They have worked hard and are all deserving of this once in a lifetime opportunity to travel to the Philippines, interact with some of the country’s movers and shakers, and develop networks that will help them further their advocacies. I wish them the best of luck as they begin this journey,” said Cuisia.

For Anzures, technology is a tool that can be used for development, and he hopes to help the Philippines affect change through the use of technology.

“The honor and opportunity to collaborate with FYLPRO will allow me to create a bridge between Silicon Valley and the Philippines, which could result in a better understanding of how technology could help Filipino culture and community progress,” said Anzures. “I intend to use my leadership skills as a role model for other Filipinos and Filipino Americans to aspire towards affecting change through advances in technology and future concepts of life, work, and communication.”

For FYLPRO delegate Gabayan, the program is a way to connect with his roots.

“I was thrilled to learn I had been selected for the program! This learning opportunity is fulfilling on both professional and personal levels,” said Gabayan. “I’ll be meeting with students, university and government officials, and companies to learn more about the state of Filipino technology education and technology startups. The program also helps fulfill a desire I have to stay connected to the history and culture of my heritage. It’s also time to work with FYLPRO delegates to discover ways we can better serve our communities. I’m looking forward to it to say the least.”

Ponseca sees the program as an opportunity to be a part of a Philippines that is well on its way to being a world leader in its own right.

“Despite our rich history, The Philippines feels like a very youthful country–brimming with all the dynamic qualities that come with youthfulness:  exuberance, enthusiasm and vitality. The Philippines is thriving. FYLPRO is just one of many groups committing resources and intellectual brain power to the country’s success, so it can stand in economic ascendency and as a world leader in its own right,” said Ponseca.

Below are the ten delegates of the 2015 FYLPRO: 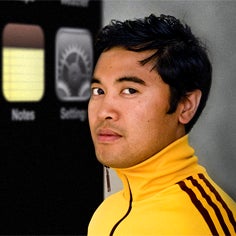 Freddy Anzures (San Francisco) – Designer in the Human Interface Group at Apple. He has been granted various patents as an inventor and collaborator on Mac OS X, iPhone, iPad, and Apple Watch since 2004. Freddy also provides design and art direction for music as creative director of Wax Poetics magazine. Freddy is interested in building relationships with art, design, and music programs as well as cultural institutions in the Philippines in an effort to bring awareness of traditional and a definition of contemporary Filipino style. He holds a Bachelor of Fine Arts in Industrial Design from Carnegie Mellon University. Areas of Focus: Arts & Culture and Technology

Jessica Caloza (Washington, D.C.) – Policy Advisor at the U.S. Department of Education. She also fundraised for several Members of Congress. She led the first campaign office in Palmyra, Virginia for President Obama’s re-election campaign. She was formerly an intern at the White House Jobs Council. Additionally, Jessica worked as a case manager for youth offenders and as a Filipino translator at the Immigration Justice Project at the American Bar Association. She graduated with a Bachelor’s degree in Political Science and Ethnic Studies from the University of California, San Diego. While there, she founded Isa Magazine, an Asian American publication focused on social justice issues. Areas of Focus: Educational Equity, Women’s Issues, and Strategic Partnerships

Jennifer Coliflores (Boston) – Staff attorney with the Committee for Public Counsel Services Public Defender Division. Jennifer also worked for former Massachusetts Governor Mitt Romney as special assistant to Lt. Governor Kerry Healey. She serves as a volunteer and vice president for the Massachusetts Youth Leadership Foundation Board of Directors. Jennifer is active in the Fil-Am community in the New England area and volunteers for the Philippine-American Mainstream Advocacy for Nonpartisan Associations (PAMANA). She finished Law School at the Roger Williams University School of Law in Rhode Island and undergraduate from Colby College in Waterville, Maine where she founded the Colby Filipino Club. Area of Focus: Civic Engagement

Anna Marie Cruz (Los Angeles) – Chief Financial Wellness Evangelist for Financial Finesse a leading workplace financial wellness provider. After a journey of self-discovery during an international development project in Vietnam with the United Nations, Anna Marie returned to the US determined to connect the Fil-Am community to issues in the home country. This led her to Search to Involve Pilipino Americans (SIPA) and served as the Small Business Coach to support entrepreneurs with business plans and the launch micro-businesses. She also owns a health coaching business. She received a MBA from University of Michigan and completed her undergraduate at California State University in Long Beach. Areas of Focus: Social entrepreneurship, health/wellness, and education

Rep. Ty Cullen (Honolulu) – Member of the Hawaii House of Representatives since January 16, 2013 representing District 39. Cullen consecutively served from 2011 until 2013 in the District 41 seat. Previously he worked as a program coordinator at Hale Kipa, Inc., a non-profit that serves at-risk youth, a ramp agent for Aloha Airlines and a teaching assistant at St. Michael’s School. He serves as an HIV/AIDS prevention instructor, an assistant coach for PONY League youth baseball and a tutor at St. Joseph’s School. Cullen earned his B.A. in Sociology and Political Science and his MPA from the University of Hawaii at Manoa. Area of Focus: Government

Kevin Gabayan (Sunnyvale, California) – Software Engineer at Google, working in the Android Location and Context team. He was the data science lead of Bump Technologies when it was acquired by Google, a graduate student research fellow at NASA Ames, and an officer of the Stanford Asian American Graduate Student Association. Kevin leads the Balanga Hangout Series, an experimental series of live video-teleconference talks and workshops delivered by Silicon Valley technology professionals to an audience in Balanga, Philippines. He is all-but-dissertation for the Stanford PhD in electrical engineering. Kevin earned an MS in electrical engineering from Stanford and a BS in electrical engineering from UCLA. Areas of Focus: Technology startups and technology education.

Angelo Ignacio (Seattle) – Marketing specialist for World Vision USA, an international Christian humanitarian organization that provides disaster relief in countries such as Nepal, Sierra Leone, Syria and the Philippines. Worked as a staff member at Invisible Children and contributed to efforts that secured the passing of two legislative bills that mandated the disarmament of warlord Joseph Kony. Angelo has participated in the AIDS LifeCycle, a 600-mile bike ride from San Francisco to Los Angeles held to raise support for AIDS/HIV services. Originally from Los Angeles, he graduated with a degree in Business Administration from Loyola Marymount University. Areas of Focus: Nonprofit, Marketing, Technology, Social Entrepreneurship

Mark Jimenez (Washington, D.C.) – Legislative Aide for U.S. California Representative, Congressman Ami Bera, where he advises on policy issues regarding higher education, housing, law enforcement, civil rights, voter protection, and Asian American Pacific Islander outreach. He was a field organizer for President Obama’s 2012 reelection campaign in Las Vegas, Nevada where he registered, persuaded, and motivated thousands of voters to reelect the president. Mark graduated from UCLA with a Bachelors in International Development focusing on South East Asia and the Philippines. In August, he will begin his Masters in Public Policy at UC Berkeley with a fellowship through the Public Policy International Affairs Program. Area of Focus: Government 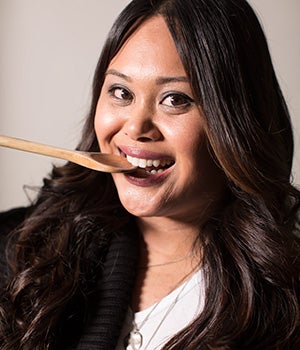 Nicole Adrienne Ponseca (Brooklyn) – Nicole is a restaurateur and owner of Maharlika Filipino Moderno and Jeepney Filipino gastropub. She is recognized for her excellent food + service and received numerous awards and acknowledgments to include Best Restaurant, Best Burger, Best Seafood, Bayani Award by the Filipino American Historical National Society and the Distinguished Woman of 2015 Award by the Philippine Consulate. She is rated #6 in Zagat’s Restaurant Power Player list. Previously she was a former advertising and production executive for Saatchi & Saatchi. Nicole attended the University of San Francisco earning her B.A. in Business Administration. Areas of Focus: Entrepreneurship and Gastronomy

Lakhi Mangharam Siap (Chicago) – Founder & Community Relations Director of Ascene Chicago, a nonprofit media marketing & events company that promotes unity and collaboration within Asian American community. He also is the co-owner of Isla Pilipina Restaurant. He’s a recipient of the Community Leadership national award by AT&T’s Asian Pacific Islanders for Professional and Community Advancement. Lakhi volunteers for several Filipino organizations such as Bantay.ph, Kaya Co, Pilipino Americans Unity for Progress, and the Youth Chair for NaFFAA Illinois. He’s passionate about reversing the Philippines’ “brain drain” by bringing exceptional Filipino Americans back to their motherland in order to create opportunities and give back. Areas of Focus: Leadership development, Tourism, Entrepreneurship, Civic Engagement, Arts and Culture.

The 2015 FYLPRO is made possible with the invaluable partnership of the Ayala Foundation, Inc. and the generous support of corporate sponsors Ayala Corporation, Chevron Philippines, Coca-Cola Bottlers Philippines, Philamlife, PHINMA, Philippine Airlines, and SGV and Co.