The plan for the world’s first resort airport. Photo from DOTC

President Benigno Aquino III on Monday will lead the groundbreaking ceremony of the new passenger terminal of the Mactan-Cebu International Airport (MCIA), which will be the first “resort airport” in the world.

In a statement, Presidential Spokersperson Edwin Lacierda said that with the construction of the new terminal building, the MCIA can accommodate up to 15 million passengers from its current capacity of 4.5 million.

“Improvements such as these help to stimulate our economy and boost our country’s reputation as a tourist and business destination,” Lacierda said.

The construction of the new terminal building at the MCIA will be the Aquino administration’s first airport public-partnership project.

“The kick-off ceremony for the construction of the new international terminal for the country’s second-biggest gateway, the Mactan-Cebu International Airport, is touted to be the start of Philippine airports matching the best in the world. It will not only cement our place on the global map as a major tourist and business destination, it will boost the local economy and is projected to generate jobs especially in Cebu,” Transportation Secretary Joseph Emilio Aguinaldo Abaya said.

Last year, GMR-Megawide Cebu Airport Corporation won a 25-year concession agreement to manage MCIA after offering a bid for the operations and maintenance of the airport worth P14.4 billion.

Before the completion of the new terminal, GMR-Megawide has implemented “soft improvements” in the existing terminal of the MCIA which include the opening of a centralized security check (CSC) system, additional immigration counter and self-service check-in kiosks, and installation of additional LED bulbs. 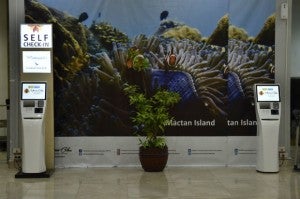 Self check-in counters at the Mactan-Cebu International Airport. Photo from DOTC

The President will be in Cebu for the event following his inspection of the construction of the new international airport at Puerto Princesa City in Palawan Monday morning.