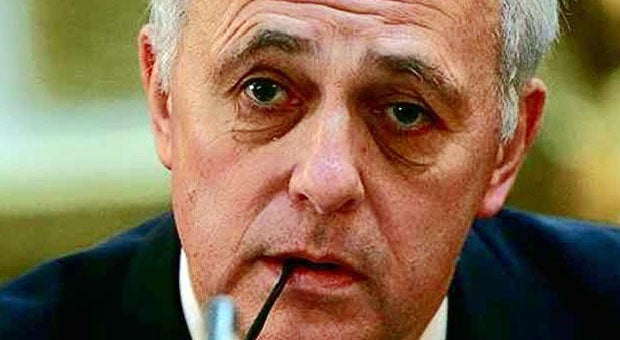 LORD Mark Malloch-Brown: There’s nothing like politics in the Philippines. AFP

With a knowing smile, Lord Mark Malloch-Brown examined the facsimiles of the Inquirer front pages on the days leading up to the toppling of the Marcos dictatorship in 1986 that were displayed in the Inquirer building’s third-floor lobby.

“I remember those days well,” he said.

Malloch-Brown was a 32-year-old lead international partner of the US-based Sawyer-Miller Group communications consultancy group when he found himself flying to Iloilo City to meet Corazon Aquino, who had dared run against the dictator Ferdinand Marcos, with golf course designer Robert Trent Jones.

Jones had built a golf course for the Cojuangcos in Hacienda Luisita and had gotten quite close to Sen. Benigno Aquino Jr., the charismatic opposition leader, and his wife, Cory. Jones was also a friend of David Sawyer for whom Brown worked in the consultancy group that was one of the first to use US-style election campaign methods for foreign governments, companies and public policy debates.

“I remember that it was about two days after that article [on Cory knowing next to nothing about the US bases, bylined by then New York Times executive editor Abe Rosenthal] was published that I flew to Iloilo to meet her (Cory) as she was campaigning. Bobby and I sat in the front row waiting, till afterward I went backstage to meet her.”

“She said, ‘The New York Times! You live in New York!’ I said, but I’m British. I told her public relations was not my business, I do political strategy. I can help you win here, but I don’t know what I can do about the New York Times,” Malloch-Brown, 61, told Inquirer editors and reporters.

And thus started what would become his first major political involvement.

“It was a fantastic campaign,” said Malloch-Brown, who confesses to loving elections.

“I have never done a campaign in an environment like the Philippines. Thank God for the Inquirer and thank God for Radio Veritas, too. Literally, they were the only two who would fairly cover us,” he said.

“I can claim to be one of the first, most loyal readers of the Inquirer. In 1986 we did not have many friends in the Cory Aquino campaign. The Inquirer and Radio Veritas were really the only two media outlets which were supportive of the opposition. And so I read you in your insurgent youth,” said Malloch-Brown, who started out as a political correspondent for The Economist before joining the New York-based American consulting firm.

“I am very passionate about elections,” he said, recalling how the group’s strategy during the snap elections was to often challenge Marcos to a debate since they knew that he could not be separated long enough from the machine he needed to keep his kidneys going to attend a debate.

“But her (Cory’s) main thing was this willingness she had to overcome the media problem by just going and campaigning everywhere. I mean she was formidable. She was just out on the road every day going all over the country and I have done an awful lot of campaigns since but I still say I learned my whole business on Cory’s campaign,” he said.

“Compared to what the New York Times said, during that campaign she was very strategic and disciplined about what she was doing. It was a real privilege to watch her,” said Malloch-Brown.

He said his final outstanding accomplishment during the Cory campaign was to produce an exit poll that indicated that she had won. It landed on the front page of the Inquirer and had a profound impact as it planted the idea that Aquino had won over Marcos, 55 percent to 45 percent.

“Marcos did not really recover after that. It was a very exciting experience to watch,” Malloch-Brown said.

He continued to watch the Philippines from abroad “as a friend” over the succeeding years, during which he pursued a career in diplomacy.

He served as deputy secretary general and chief of staff of the United Nations under Kofi Annan. Before that he was administrator of the United Nations Development Program. He was later minister of state in the British foreign office, covering Africa and Asia, and was a member of British Prime Minister Gordon Brown’s Cabinet.

Other positions included vice chair of George Soros’ Investment Funds, as well as his Open Society Institute, vice president at the World Bank and the lead international partner of Sawyer-Miller, a political consulting firm. He also served as vice chair of the World Economic Forum.

Last year, Malloch-Brown took over the chair of the SGO Group, a London-based venture that is the world’s largest provider of election technology, and is now the parent company of Smartmatic, the company that provided the machines for the elections in the Philippines in 2010 and 2013, but which has run into controversy over the reliability of its technology.

Malloch-Brown, who could give Smartmatic the political clout it needs, is back again to take a closer look at the Philippines and is both pleased and concerned by what he sees.

“Ever since those early days in 1986, I followed this country closely as a friend, and there has always been this striking contraction between economic performance and international business and investor confidence,” he said.

“For years after 1986, the economy was growing slower than your neighbors. It was still seen as sick man of the region in a way. And then in the latter years, your growth has been very, very strong, essentially faster than your neighbors, even if coming from a lower base,” he said.

“What is interesting is that the usual indicators, share of GDP have moved much more slowly, reflecting in a way some resistance domestically to opening up the economy, but more is the caution on the international investor side about stability and governance in the Philippines,” he added.

“Does this country now have the clear forward direction of others in the region? Actually, others in the region all have their difficulties now. Here is the real opportunity for the Philippines to confirm that it is on this new course of sound economic government, rule of law, anticorruption, a kind of safe destination for foreign investment.”

He said that he had seen “quite a change” in President Aquino.

He recalled Mr. Aquino as “very quiet” and constantly at the side of his mother and sister, Ballsy, during the 1986 campaign.

“I remember this black attaché case that he was always carrying. I asked what was in there, probably a rosary and a bible and copies of speeches. In the beginning, I was wondering if it was a gun but I don’t think it was,” he said, “He was very quiet, watching everybody and everything. He was very much the observer, not the participant.”

Malloch-Brown has not seen him for old time’s sake and it is a deliberate move on his part considering the Commission on Elections (Comelec) bidding involving his company and ultimately the conduct of elections in May 2016.

From his experience in international relations, countries usually build on reforms quite slowly until a “cathartic” event takes place. For him, the 2016 general elections are that cathartic event for the Philippines.

“Obviously, it matters who wins, but in a way the conduct of that election will be almost as important. If it is seen as sort of free and fair, conducted in a modern way, then it will confirm this growing, sort of beginnings of an international view that the Philippines has become this very interesting opportunity,” he said.

He said foreign investors like the Americans and the British were looking at the Philippines with a new attitude.

Philippine-American relations are “really warming up again,” while British-Philippine two-way investment has been “really growing remarkably,” he said.

“Looking through my lens of development, the Philippines is really on an interesting cusp. Just as some of your competitors in the region have fallen back a bit, you’ve got the growth and [are] building the confidence. You have to get through this next election cycle looking forward and not falling back on failed systems of the past,” he said.

There are concerns over whether it is a good idea to pursue the automated elections in 2016, noted Malloch-Brown, who said he understood where the sentiment was coming from. It is rooted in this historically low degree of trust in government institutions, he said.

However, it is time to move forward and the people should not be “victims of historical sentiment,” he said.

“The Comelec [now] is not the Comelec of 1986. It has strong and independent leadership, the schoolteachers who support it on Election Day are people of integrity and honor, and that the machines it now uses and the investment in technology has created a system that ensures the honesty of the vote count. That has gotten clouded by this history that still overshadows rational judgment about these issues,” he said.

Regardless of what happens during the Comelec bidding process, Malloch-Brown is looking forward to the elections in 2016, as there is nothing like politics in the Philippines.

“It is like the greatest political soap opera on Earth in a way. There is a level of drama and melodrama to it which [when] you go next door to Thailand or Malaysia where all the politicians are very jowly men. There is just none of this excitement around it,” he said.

But at the same time, he could not stress enough the importance of the 2016 elections.

“I think the 2016 elections will be a real watershed. The Philippines always calls its elections watersheds and there have been some that really have been. But I think 2016 either confirms that the country is on a course to a more democratic, stable, rule of law-based future, or is seen as a reversal of that. In that sense the conduct of the elections is probably as important as the winner of the elections. Whoever wins needs to have been seen to have won because most people chose [that person] as president,” he said.

After winning title, time for LA Tenorio to give back to Batangas folk