U.S. marriage equality hailed by Fil-Ams except by ‘old school’ 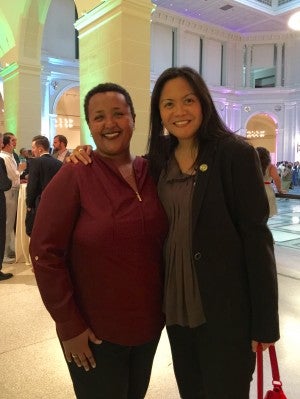 NEW YORK CITY — Two days ahead of the Stonewall Riots’ 46th anniversary, the Supreme Court of the United States handed the LGBT community a huge victory with the 5-4 ruling that legalized same-sex marriage in all 50 states. With today’s Supreme Court ruling, all loving and committed couples now have the freedom to say “I do” no matter what state they’re in.

It puts paid to decades of hard work by millions of LGBT activists and allied Americans, for whom marriage equality has been a cherished dream long before the gay community in Manhattan brought the human rights issue to the forefront with the Stonewall Inn as their backdrop in 1969.

In 2004, this could only happen in Massachusetts, the first U.S. state to recognize same-sex marriage. San Francisco followed suit with then-

Mayor Gavin Newsom taking a courageous stand in presiding over the marriage of Phyllis Lyon and her late partner Del Martin.
Thousands followed in their footsteps, coming from all over California and the world, eager for the opportunity to legalize their commitment, relationship and love for each other. 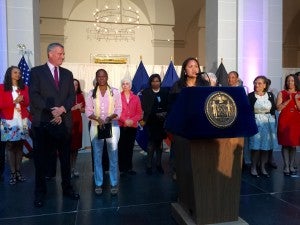 “I will never forget those couples and how something so common as a marriage was also so fundamental in the fight for full equality,” Newsom, who is now lieutenant governor of California eyeing a gubernatorial run in 2018, said in a press statement.

“Today’s decision by the U.S. Supreme Court to protect millions of loving families and parents and to guarantee marriage equality for EVERY American in EVERY state is truly a historic advance. This is equality without exception, and a great victory for the civil rights of every American,” he said.

A longtime advocate for LGBT rights, New York City Human Rights Commissioner Carmelyn Malalis is in the right place at the right time. Married for 14 years, the Fil-Am lawyer was appointed as chairman of the City’s Commission on Human Rights in November last year.

“This is a historic ruling for our nation and a very important one to me personally as a mother of two in a same-sex biracial marriage,” Malalis told INQUIRER.net. “The Supreme Court recognized that LGBTQ individuals and families are entitled to fundamental freedoms and equal protection of the law.  Recognizing the constitutional right of same-sex couples to marry acknowledges the dignity of our relationships and the full rights and responsibilities that come with marriage.” 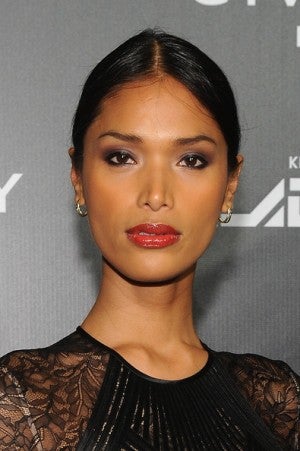 Noting that marriage equality is being celebrated today beyond the LGBT community, Malalis emphasized that equal protection of the law is essential in any civil rights movement.

Same-sex marriage has been legally recognized in New York since for almost four years, under the Marriage Equality Act, which was passed by the New York State Legislature on June 24, 2011, signed by Governor Andrew Cuomo on the same day and took effect a month after.

“At the NYC Commission on Human Rights, we not only enforce the law but we also work to educate the public and promote diversity and inclusion,” she said. “Now all municipalities across the nation must work to ensure that this decision will help LGBTQ people to be treated with dignity and respect. This is a significant step towards equality but there is still more work ahead to achieve fundamental freedoms and equal protection of the law for all,” Malalis added.

“As a TransPinay and a person of color, my community is the most marginalized,” she told  INQUIRER.net via email. “You can still get fired because of your gender identity. There’s still no basic access to transition-related health care.”

Rocero warned that high numbers of homeless trans-youth of color are at risk. “I don’t want to live in a world where if you are a trans person of color, your life expectancy is 35 years old,” she said. “I will celebrate now but will work harder through Gender Proud and to continuously tell my story. It’s hard to hate when you know people’s story.”

For Dr. Kevin Nadal, professor of psychology at City University of New York and executive director of The Center for LGBTQ Studies, the Supreme Court ruling is a catalyst.

“Not only will couples be allowed to legally wed, but the ruling will open the door to a number of other rights for LGBTQ people, including adoption, hospital visitation, immigration, and even fairer tax payments,” he said. “I hope that this ruling will also lead to advocacy for other issues affecting the LGBTQ community, including hate crime assaults against transgender people— especially transgender women of color, job discrimination, and HIV/Aids which still affects our community in disproportionate numbers,” Nadal said further.

A big weight off

“This has been forthcoming and I hope that many other nations will follow,” she told INQUIRER.net. “With this already achieved, I hope that we can now work on other relevant legislations that will impact other communities such as the transgender community. I would like to see the same energy and compassion put towards transgender equality in this nation. On a lighter note, bridal registry will never be the same.”

In Houston, Texas, married Filipino couple Vincent Evangelista and Ken Cruz paid tribute to advocates who have passed on.

“This is a monumental day for us—we feel ecstatic and emotional at the same time, we’re thinking of and grateful to those who were before us who have fought hard for equality,” Evangelista, a community liaison manager at 1 Stop Health Care Services, told INQUIRER.net. “We especially remember all those who have passed on that did not witness this very special day.”

Rudy Asercion, commissioner of the Veterans War Memorial in San Francisco, who is opposed to gay marriage in view of his Christian faith and because “I’m old school” nevertheless concedes that the law must be obeyed. 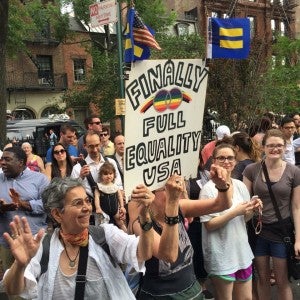 “Even though I am opposed to gay marriage, I am certainly not going to go around and tell gays not to get married because that’s their prerogative, plus it’s legal so yes, they can go ahead and marry anyone they want. The gay people should not be exempt from the horrors and tribulations of divorce. Why should just the straight people suffer from the consequences of divorce?”

But for New York City Mayor Bill de Blasio, the Supreme Court ruling is more about love and compassion. “America will never forget this day, and neither will people all across the world who know the meaning of love and compassion,” De Blasio stated. “June 26, 2015, will forever be memorialized as a pivotal moment in the history of our nation – the day the Supreme Court affirmed our core values of love, equality, and justice, rejected ignorance and malice, and appealed to the humanity in us all,” he added.

“Our country will finally afford millions of Americans the rights they have always deserved, but until now were unable to exercise. Today, this country is richer – filled with more equality, more acceptance and more love than yesterday. And for the people of this city, where the movement for LGBT rights began in 1969 at the Stonewall Inn, we can be proud that we helped blaze the trail to this great victory,” De Blasio said further.

Describing the Supreme Court ruling as “justice that arrived like a thunderbolt,” President Barack Obama also traced the decades-long struggle for marriage equality and touted the ruling as a victory for America. “This ruling will strengthen all of our communities by offering to all loving same-sex couples the dignity of marriage across this great land,” he said at the White House.