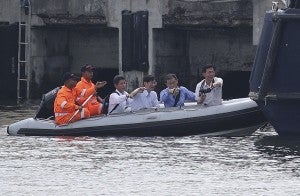 Taiwanese investigators look at a portion of a ship involved in the alleged shooting of a Taiwanese fisherman as they ride a rubber boat with the Philippine Coast Guard on May 28, 2013. AP FILE PHOTO

A forensic pathologist and a firearms examiner from Taiwan have testified at the homicide trial of eight Philippine Coast Guard personnel charged with the killing of a Taiwanese fisherman during an operation in the Balintang Channel in Batanes in May 2013.

Pan, a forensic pathologist from the Taiwan Institute of Forensic Sciences, testified on the manner of the death of Hung Sheh-cheng and the extent of his injuries, Navera told reporters. Chen, on the other hand, testified as a firearms examiner from the Criminal Investigation Bureau. The prosecutor did not give details of their testimonies.

He added that Chen’s direct testimony was not completed for lack of time. The next hearings were set for Aug. 3 and 4, and Sept. 7 and 8.

Navera said the prosecution would present 10 more Taiwanese “technical witnesses” to the court.

Hung Yu-chih, son of the slain fisherman, was the first prosecution witness. He testified when the trial was still being held at the RTC in Basco, Batanes.

Hung testified before the court in Batanes on the circumstances of the May 9, 2013 incident, recounting how the PCG personnel chased and fired on their fishing vessel, Guang Da Xing 28, as well as how they were rescued by Taiwanese fishing boats and coast guard in Taiwanese waters after their vessel drifted off.