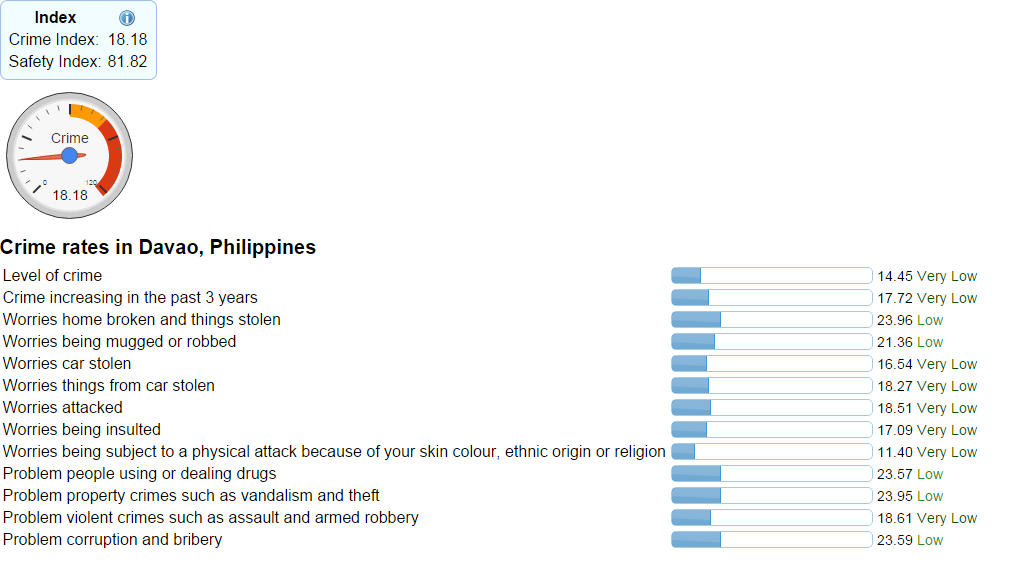 Davao City is now the fifth safest city in the world, improving from its ninth-place ranking last month, according to the data released by crowd-sourcing survey site Numbeo.com.

This month’s rating is a significant improvement from the city’s crime index of 19.31 and safety index of 80.69 from the previous survey.

READ: Davao City ranks as 9th safest in the world

Curiously, the Philippines has a crime index of 43.11 and a safety index of 56.89 according to the website.

The city, which is led by Mayor Rodrigo Duterte, trails behind fourth safest city Bursa, Turkey which has a crime index of 17.66 and a safety index of 82.34.

Numbeo.com is said to be the largest website which utilizes user-generated data on cities and countries worldwide. The website features rankings of cities in topics such as health care, cost of living, and quality of life.

Research and data that are found in the site are not influenced by any government organization, Numbeo.com founder Mladen Adamovic claimed.

Data from the website have been cited by The New York Times, The Guardian, British Broadcasting Company, Forbes and Time magazine. IDL