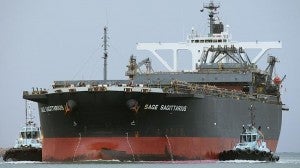 SAN FRANCISCO — A witness testified at an Australian coroner’s court that the crewmembers of the coal ship Sage Sagittarius feared that “we will be next” after the mysterious disappearance at sea of a Filipino chief cook.

Another witness said that the Filipino captain, Venancio Salas, had a heated argument with the chief cook Cesar Llanto a week before the latter disappeared overboard, according to report by the Daily Telegraph of Australia.

A crewmember said he witnessed Salas having a “quarrel” with the Filipino chief cook in the ship’s galley just days before the latter mysteriously disappeared from the ship on August 30, 2012, as it was sailing through the Coral Sea off Cairns.

Llanto had told the crewmember, who is not identified, that the argument was over the captain’s request to reduce the amount of food being given to the ship’s crew.

“I saw a bit of anger from Captain Salas but not from Mr Llanto, he stayed humble,” he told the inquest via video link and was quoted in a report by the Daily Telegraph.

He told of a separate incident in which the chief cook was summoned by Captain Salas to go to the bridge of the ship regarding a complaint from the mess man, and believed they were “quarreling” again. He said he did not believe the chief cook accidentally fell overboard or committed suicide, the Daily Telegraph reported further.

Philip Strickland, counsel assisting the NSW Coroner, directly asked the witness if he believed the captain was involved in the cook’s disappearance.

He responded: “In my opinion, I think he may be involved.”

After Llanto’s disappearance, the ship then docked in Port Kembla, where Australian authorities launched an investigation. It then traveled on to Newcastle, where the chief engineer, Hector Collado, also a Filipino, died after falling over a railing inside the ship’s engine room. Examinations revealed that Collado had several injuries believed to have been sustained before the fall.

A senior executive from the Japanese shipping company, who was on board to carry out an internal investigation into the two deaths, died just two weeks later as the ship was docking in Japan. Chief Superintendent Kosaku Monji was crushed to death in a conveyor belt in the early hours of October 6.

Read Next
US solon renews push for Filipino Veterans Fairness Act
EDITORS' PICK
IATF to LGUs: Issue ordinances vs attacks on frontliners, COVID-19 patients
Nograles: Cabinet members to donate 75% of monthly salary to aid COVID-19 fight
Diokno to Duterte: OK to make fun of buck tooth, but focus on people’s needs first
10 Filipinos positive for COVID-19 in UK, 7 in Ireland — envoy
Quick chat with Nicole Andersson: ‘You really don’t need much to be happy’
Robredo spox thanks Duterte for defending VP’s efforts vs COVID-19
MOST READ
Gov’t mulling quarantine period extension of 15-20 more days
Sotto on Isko Moreno’s call: We do our job without the media following our every move
Cook more and eat less: Tips on your quarantine diet
ADB warns PH against prolonged lockdown
Don't miss out on the latest news and information.