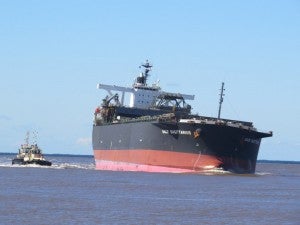 NEW SOUTH WALES, Australia – There was conflict on board one of the world’s biggest coal carriers on the day one of the crewmen, a Filipino, disappeared overboard, an inquest into three suspicious deaths on the foreign-flagged ship found.

The Glebe Coroners Court has been trying to determine if the deaths of the three seamen on board the Sage Sagittarius, within a six-week period in 2012, were accidents or murders, according to a report by the Hellenic Shipping News.

The chief cook, Cesar Llanto, a Filipino, disappeared overboard from the coal carrier in August 2012 as it approached Australian waters. Llanto was reportedly a protective ‘father figure’ among the crewmembers.

Two weeks later another Filipino crewman Hector Collado, a close friend of Llanto, was killed while the ship was moored at the Port of Newcastle.

The third man, Kosaku Monji, a Japanese superintendent, was crushed to death in a conveyor belt as the Sage Sagittarius docked in Japan.

“The deaths were “highly suspicious,” according to inquest counsel Philip Strickland.

On the second day of inquest Venancio Salas, the Filipino captain of the Sage Sagittarius faced a severe grilling about the mysterious deaths of three people what has been dubbed the “death ship” by local media.

The ship’s captain, Venancio Salas, has been accused of gun running, punching crew and trying to cover up incriminating evidence. It is alleged that the cook, Llanto, was about to report Salas to the International Transport Worker’s Federation in Australia over his bullying, according to a report by Splash247.com.

Testifying via video link from the Philippines, Salas admitted to punching crewmembers, drinking sessions onboard and taking a commission for selling guns to crewmembers.

Counsel assisting the inquest, Strickland said Captain Salas first heard of the plan to report him between 8 a.m. and 8:08 a.m., just minutes after the cook was last seen alive.

It also was alleged that Salas instructed the crew to destroy a written complaint about his bullying. The inquest continues.