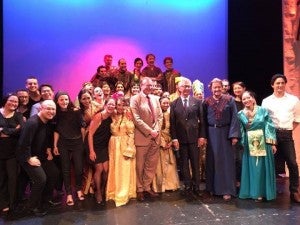 It was a “very successful launch in Europe,” said Gene Alcantara, executive producer of the London show. “The audience was amazingly warm,” Alcantara also observed that the audiences were a “predominantly younger crowd.”

The musical previews took place at Le Vingtième Théâtre, a 250-person capacity venue located in the thriving commercial area of Paris in the 20th arrondissement, an intimate venue that did not deter the enthusiastic crowd of French and Filipino theatergoers who were intrigued by the emergence of a new musical from Asia.

Chua, pleased and relieved by the high turnout especially of playgoers in their early twenties and late thirties, said that these younger art aficionados were exactly the type of audience he had hoped the show would attract. 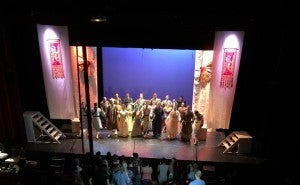 The Marco Polo musical getting a standing ovation at curtain call. CONTRIBUTED PHOTOS

“They were very receptive and engaged with the performance and stayed a long time chatting to the artists and the crew after the show,” added Alcantara.

The five Filipino talents brought from the 2015 Manila production, for some of whom the performance was their first outside the Philippines, rose to the challenge of the European stage.

Excluding Filipino American actress-musician Stephanie Reese, who starred in “Miss Saigon” on Broadway, the Filipino talents were given the opportunity to shine on an international stage. They did not disappoint.

Well-known Filipino actor, Chinggoy Alonzo, who played the dual roles of narrator and Marco Polo’s father, was elated after the first performance.

European additions to the cast

The artists that Chua brought from Manila were well complemented by local musical talents.

Musician John Florencio, a Fil-Am like Reese, was involved in the Paris auditions held in February earlier this year. Florencio accomplished much in two weeks, rehearsing the French cast to get them singing at performance level.

Chua further brought in a French violinist, a flutist, a bassist and a drummer, who played “very well,” despite the musicians performing to the left of the stage, rather than from the usual orchestral pit in front of the stage.

European performer Bastien Jacquemart, played the role of Marco Polo, which was played by another European, Parisian performer Jonathan Wagner, during the Manila previews. Jacquemart brought to the role “charisma” and an “exceptional” singing voice. Belgian artist Marie Glorieux was impressive as Empress Wu.

Meanwhile, Jacquemart, set to marry in July his longtime girlfriend who also enjoyed the show, thanked Chua for giving him the opportunity to play Marco Polo.

“The only thing with the show was the strong accent of the French performers when speaking English,” Alcantara noted, “but nobody mentioned it as we were in France, after all.” 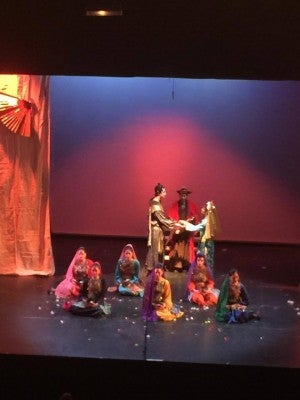 A scene in the ‘Marco Polo’ musical. 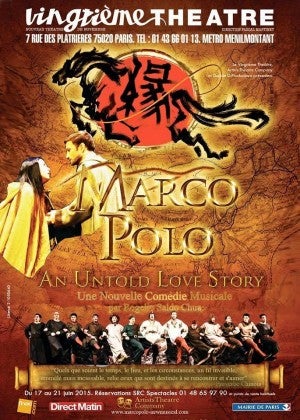 On working with French cast members, Chua commented that the “beauty” of their performances was the fact that “they put their own personalities into their roles.”

The production was also subtitled on a projector in French, orchestrated by Stephane Ly-Cuong. Without the subtitles, Chua acknowledged, the musical would have been only half-understood.

A review from French publication Direct Matin described the musical as a “Marco Polo fantasy” filled with “travels and emotions.”

Actor-musician Dennis Astorga, a former “Miss Saigon” cast member in the European shows who has been based in Paris for the past five years, had nothing but praise for the successful production.

Joan Chavez, a Filipina based in Paris, left her two young children with her mother at home so that she could catch the performance. “I loved it,” said Chavez. “I’d love to see it again.”

Paris-based ABS CBN correspondent Marilyn Rayray was busy covering “Marco Polo” as a member of press but stated that she would be bringing her children to watch it the production over the weekend.

Alcantara acknowledged that after the final June 21 performance of the Paris previews, Chua and the entire ensemble were “extremely relieved” at the show’s success.

The next rehearsals and production previews of “Marco Polo, An Untold Love Story, a New Musical” will be held in London later this year.