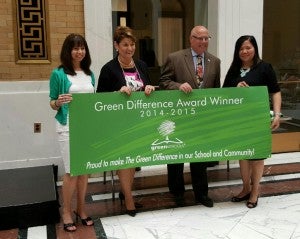 SAN PEDRO, California — An immigrant from Camarines Norte received an “Outstanding Green-o-vation” award from an environmental nonprofit for integrating environmental conservation education in the classroom.

Jennifer Suzara-Cheng, who came to this country 11 years ago, teaches honors and AP biology courses at San Pedro High. She recalls with amusement that she was known in Ateneo de Naga, where she taught for 13 years, as “Reyna ng Karagatan” (Queen of the Sea) for her consuming interest in marine biology.

Green Schools Inc., the nonprofit organization that gave Suzara-Cheng, the award, honors students, teachers and administrators from across the nation for their contributions to the environmental movement.

In California, Suzara-Cheng, joined her school principal, Jeanette Stevens, who received another Green Award for supporting a science fair initiative that focused on environmental conservation.

Out of the classrooms

Maureen Aylward, director of students and schools at Green Schools Inc., said it is important for teachers to get students out of the classroom and into interactive environments.

“Teachers who do this are rare,” Aylward said. “But it’s very important for the students and the STEM curriculum.” The 2015 Green Difference Awards were held at the Massachusetts State House on Tuesday, May 26th.

In an interview with INQUIRER.net, Suzara-Cheng, announced excitedly that she had been selected to represent the public sector educators as a speaker on “Green Schools Alliance: Accelerating Change Through a Diverse School Network” to be held on October 15-18 at the 2015 North American Association for Environmental Education (NAAEE) conference in San Diego. 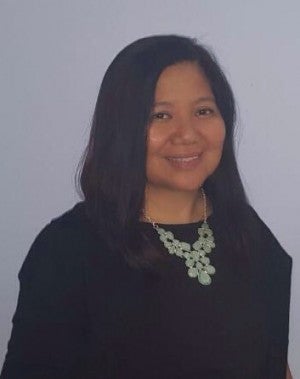 “I’m lucky to hold the job of a teacher, always excited to start a working day with something to teach on the environment to my eager students,” she said.

She raises environmental consciousness in the classroom by either bringing in experiments from “the outside” to indoors, or getting her students out on the beaches, in the ocean, marshlands, among others. She gave an example of an experiment such as raising a shark indoors.

“Creating ocean awareness through hatching a bamboo shark in the classroom, then raising it, maintaining water salinity, temperature, nitrate was a big challenge,” the Ateneo de Naga graduate cited.

“The sense of responsibility and ownership developed by the students was heartwarming. This baby shark became famous in the school, students who were not even in my class would come and visit at lunch,” she continued.

She said that as an educator she believes in the importance of “in situ” (on site) experiential learning as an innovative way to teach students the complexities of the environment around them.

“I try to look for opportunities to take students out on field trips to expose them on the realities outside the classroom. I always tell my students that learning should never be confined within the walls of school and the entire world is their learning area”.

Not only is Suzara-Cheng a trailblazer in environmental protection here in the States, her family, the Suzaras, trace their patriotic roots to her great grandfather General Vicente Lukban, one of the heroes of the Philippines-US War in 1901. Her grandfather was the first governor of Camarines Norte, Fernando Suzara.

Another project she is proud of was a recent winner of the Wetland Competition, a video produced by San Pedro High School biology students and which shows the students conducting water testing in a wetland near their school.

The project on wetlands experiments was co-sponsored by the Prince William Network and USDA Forest Service. It netted a $1,000 cash prize, which Suzara-Cheng’s class used for a field trip. The off-campus activity was co-sponsored by Cathy Beauregard of the Adopt a Storm Drain Foundation.

San Pedro is within the City of Los Angeles. The Port of Los Angeles, a major international seaport, is partially located within San Pedro. The district has grown from being dominated by the fishing industry to a primarily working class community.

San Pedro High School is a unique public high school in the Los Angeles Unified School District (LAUSD) with two campuses: Flagship and the John M. and Muriel Olguin Campus. Located in the city of San Pedro, Los Angeles County, the Flagship campus is divided into four different SLC’s (Small Learning Communities), one of which is Global Environmental.

Suzara-Cheng is recognized in her school to be a dedicated science teacher who has created diverse learning opportunities for her students. A school publication heralds her importance: “Ms. Cheng leads by conducting activities that range from local to far-flung field trips, science fairs, community service opportunities and competitions. With an emphasis on hands-on outdoor education, her students become passionate about environmental stewardship. Mrs. Cheng is a leader in the environmental literacy movement within her district.“

Since her college days, Suzara-Cheng, has been fascinated with environment and preservation. Her college thesis was “Inventory of Marine Macroscopic Seaweeds in Camarines Sur.”

She believes studying seaweeds brings in primal knowledge about the ocean and cycle of life.   “We know that when seaweeds are healthy, the ocean is healthy and that means less pollution in these areas. These serve as habitat for small organisms and gauges marine pollution.”

Suzara-Cheng graduated from Ateneo De Naga with a BS in biology and a master’s in education. She taught there for 13 years before immigrating to the U.S. in 2004. She is has been married to mechanical engineer Alex Cheng for 29 years and they have three adult children, two of whom are college graduates with math or science degrees, and another one in college.

She’s always on the lookout for organizations sponsoring free buses and field trip opportunities (such as ITEP, Adopt a Storm Drain and PortTechLA). “Every fieldtrip requires preparation, guidelines and expectations; students are briefed what to do so they know the proper behavior and safety procedures,” she explained.

Her students take videos of the trips and experiments. This involves writing the script, direction, editing and reviewing the science behind the activity. The videos provide a glimpse of the excitement and engagement of students on well run fieldtrips that can never be captured inside the classroom.  A sample of this video trip can be accessed through the following:

“My students not only learn from me, but they also learn from each other and we all learn from guest speakers invited to share their expertise,” Suzara-Cheng said. “My SLC Global environmental program presents speakers from environmental careers, which allows students to be engaged and gain understanding of the real world. This has led to summer internships, job shadowing and OJT. Most juniors and seniors experience a change of attitude regarding the connection between grades and jobs.”

Her school is very conducive to environmental learning because it is only a mile away from the Pacific Ocean. “You can say it is a school with a view,” Suzara-Cheng laughed.