Why F. Sionil Jose is wrong on Chinese Filipinos

I just read your essay on China and Chinese Filipinos. And I’m stunned.

I thought that maybe I misread it, that I missed some deeper, hidden meaning, a clever twist in what you wrote. You are, after all, a National Artist in Literature, an accomplished novelist. And I am one of your admirers.

It’s clear: You’re making a sweeping, unjustified condemnation of Chinese Filipinos. You’re issuing an incomprehensible warning to the nation that Chinese Filipinos will stab us in the back in the event of what you say is an inevitable war with Beijing.

“I know now that in the event of a war with China, many of our ethnic Chinese will side with China so I will not ask anymore on whose side they will be if that war breaks out,” you write.

“I will ask instead my countrymen — they who are aware of our revolutionary and heroic tradition — the Filipinos who revere Mabini, Rizal, all those who sacrificed for this land and people: ‘What will you do now?’” 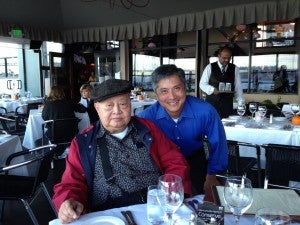 I have an answer.

What I need to do is point out that you’re wrong. You’re a novelist whom many admire, including me, but what you said, the ideas you expressed, were mean-spirited, narrow-minded.

I read your essay the day after nine African Americans were killed inside a South Carolina church known for a long history of defying slavery and racism. The murderer was a young white man who made ugly racist comments before gunning down members of the Emanuel African Episcopal Methodist Church.

It’s unclear how his worldview evolved. But he unleashed this cowardly act of violence at a time when more prominent individuals — politicians, commentators, writers — have been voicing intolerant views in mainstream media, denigrating immigrants, gays and lesbians, blacks and other ethnic minorities.

There’s still much intolerance in America. And, amid rising tensions with China, in the Philippines.

As a respected, even revered artist, you could play such a pivotal role in sorting out the issues in this conflict; in pointing out that the fight is with the power-wielders in Beijing, the militarists and the Chinese Communist Party bosses, the profit-hungry masters of their fast growing economy.

Not the ordinary Chinese in China or in the Philippines.

Making that distinction clear is tough in a time of warmongering and hate. The racists, both Filipino and Chinese, are becoming bolder, more reckless. And it’s troubling to see you, Manong Frankie, appear to follow the lead of narrow-minded Filipinos spouting the most bigoted, idiotic statements about the Chinese.

In recalling your experiences during World War II, you noted how “some” Japanese gardeners employed by rich Filipino families “turned out to be deep penetration agents.”

It’s important that you used the word “some.” But in the context of your essay, you come across as declaring that, in the brewing conflict with China, “all” Chinese Filipinos should be viewed with suspicion, branded as enemy agents.

History has shown repeatedly how sweeping denunciations of an entire community can be destructive and cause so much pain.

That happened here in the U.S.

When you were struggling to survive the Japanese Occupation in the Philippines during World War II, more than 100,000 Japanese Americans, including children and elderly, were being sent to internment camps throughout the United States.

Their crime: they were of Japanese descent.

Here’s the ironic twist in this sad chapter in American history. Even as their families were languishing in American concentration camps, a group of Japanese American soldiers served and fought bravely in the Allied campaign against Nazi Germany. The 442nd Infantry Regiment was the most decorated American fighting unit in World War II.

The U.S. government later acknowledged that the internment of Japanese Americans was wrong and apologized to the survivors and their families.

Twenty years ago, I watched Emperor Akihito, who earlier this month expressed remorse for Japan’s occupation of the Philippines, bow before a group of elderly Japanese Americans in Japantown in San Francisco and said he was sorry the suffering they endured during the war.

It’s troubling that a writer who so eloquently chronicled the rise of Filipinos as a more united nation would now focus on what divides us.

Toward the end of your novel Poon,” Apolinario Mabini expounds on the importance of unity in a conversation with the main character, Eustaquio Samson, “If only we could learn to trust one another — Tagalogs trusting Ilokanos, Pampangos trusting Tagalogs. … More of this and, Eustaquio, we have a nation! … There is so much that the past can teach us.”

That’s the F. Sionil Jose we, especially young Filipinos, should read and learn from.