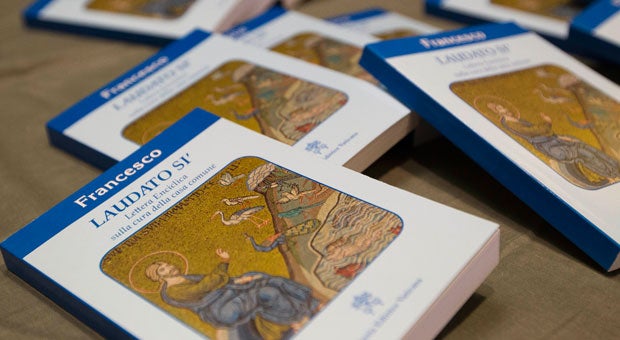 Copies of Pope Francis’ encyclical “Laudato Si” (Praise Be) are displayed prior to the start of a press conference, at the Vatican, Thursday, June 18, 2015. Pope Francis called Thursday for a bold cultural revolution to correct what he calls the “structurally perverse” economic system of the rich exploiting the poor that is turning Earth into an “immense pile of filth.” AP PHOTO/ANDREW MEDICHINI

Pope Francis cited Filipino bishops in his encyclical on the environment “Laudato Si, Mi Signore” (Praise be to You, My Lord).

“Who turned the wonderworld of the seas into underwater cemeteries bereft of color and life?” the encyclical read, quoting part of a 1988 pastoral letter of the Catholic Bishops Conference of the Philippines (CBCP) titled “What Is Happening to Our Beautiful Land?”

CBCP president Archbishop Socrates Villegas said the Pope’s citation was a recognition of the pastoral efforts of the Philippine bishops for almost two decades in the area of ecological stewardship.

“It is an affirmation that we in the Philippines are in the right direction in teaching that creation is a gift that must be cared for,” Villegas said.

He added that this was not the first time the Pope cited the CBCP in an encyclical.

Villegas said the Pontiff also quoted other passages of the CBCP’s 1988 statement in another landmark document of his papacy, “Evangelii Gaudium (The Joy of the Gospel).”

Manila Archbishop Luis Antonio Cardinal Tagle has cautioned people about mistaking the encyclical for a scientific treatise, stressing that it is first and foremost a pastoral analysis based on Church teachings and contemporary experiences.

Tagle pointed out that the encyclical does not in any way pretend to resolve scientific questions related to the environment and climate change.

He explained: “Rather it offers a pastoral analysis and appeal nurtured by the Bible and the Catholic Social Teachings, the pronouncements of Popes, and a reading of the current ecological conditions we are facing.”

Tagle urged the faithful, especially those of the Archdiocese of Manila, as well as various sectors and groups, to “study, enrich, discuss and meditate” on the various points raised by the first ever encyclical on the care of humanity’s common home, the Earth.

“With Pope Francis, I invite the faithful, the religious and the clergy to study, enrich, discuss and meditate on the various points of the encyclical. We call on non-Christians, families, educators, politicians, business people, experts in science and digital technology, media, consumer groups, nongovernment and peoples’ organizations to study the encyclical and its proposals,” said the prelate.

Meanwhile, the environment group World Wide Fund (WWF)-Philippines said the Pope’s encyclical was “the push we need” to move for faster action during an upcoming United Nations conference on climate change.

In a recent statement, WWF-Philippines said the encyclical’s timing was “perfect,” as world leaders were slated to meet in Paris in December to discuss climate change solutions for the UN Framework Convention on Climate Change.

“This is the push we need in order to realize that a future powered by renewables is the best way to heal what Pope Francis termed the ‘wounds wrought by humanity’s irresponsible actions,’” said WWF-Philippines president and CEO Joel Palma.

Palma noted that the Philippines was the third most vulnerable nation to climate change, with 20 typhoons hitting the Philippines annually. Supertyphoon “Yolanda” (international name: Haiyan) alone took 6,300 lives and caused US$14 billion in damage in 2013, he said.

“Climate change is the great challenge of our time. Some of the world’s poorest countries are also the most vulnerable to climate effects. Few have the capacity to keep rebuilding after every flood or storm,” Palma said.

In the same statement, WWF International president Yolanda Kakabadse welcomed the encyclical as “a much-needed moral approach to the climate debate.”

“Climate change is no longer just a scientific issue. It is increasingly a moral and ethical one. It affects the lives, livelihoods and rights of everyone, especially the poor, marginalized and most vulnerable communities,” Kakabadse said.