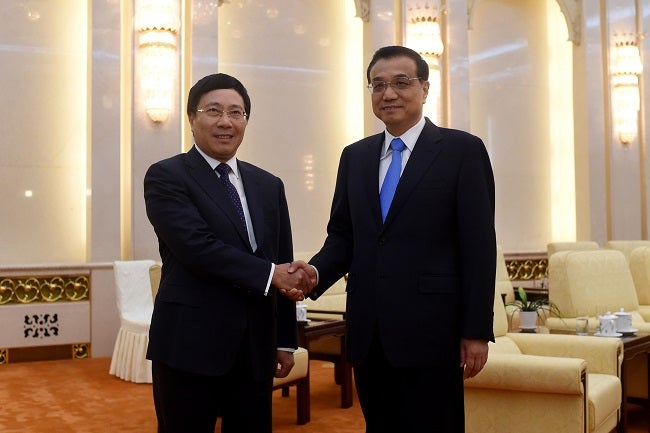 Vietnam has vowed to carry out maritime, infrastructure and financial cooperation with China and to “properly handle disagreements”.

A media release issued by the Chinese government on June 18, 2015, after the meeting said, “Pham Binh Minh said that the Party and government of Vietnam have always viewed relations with China as a strategic choice and a diplomatic priority.”

Minh, who is also Vietnam’s foreign minister, said his country expects to maintain high-level communication with Beijing and to enhance civilian communication.

He was in Beijing to attend a meeting of the China-Vietnam Steering Committee for Bilateral Cooperation, a key communication channel between the two neighbours. State Councillor Yang Jiechi and Minh co-chaired the meeting.

Minh is the latest of several high-ranking Vietnamese officials to visit China after bilateral ties dived last year when Hanoi protested over Beijing setting up an oil rig near the Xisha Islands, which are also claimed by Vietnam.

The rig’s operations were disrupted by Vietnam. It also triggered anti-China demonstrations in Vietnam that turned violent and left at least four Chinese dead.

In May, the two nations’ defence ministers met and witnessed joint patrols on both sides of the border.

Xu Liping, an expert on Southeast Asian affairs at the Chinese Academy of Social Sciences, said, “Vietnam has realised that controlling disputes with China in the (South China) sea is in line with its national interests.”

He suggested advancing cooperation on maritime, land and financial affairs “at the same time”, and taking infrastructure construction and connectivity projects as “breakthrough points”.

This would enable “China’s advanced industrial capacity to be paired with Vietnam’s demand for industrialisation and modernisation,” Li said.

Chu Hao, a researcher of Southeast Asian studies at the China Institutes of Contemporary International Relations, said infrastructure cooperation with China would result in more investment for Hanoi. He said this would be vital for Vietnam to shoulder downward pressure.

Tangible cooperation would also draw the two countries closer to help control friction, Chu said. Such cooperation, despite the maritime disputes, could set a good example for the region to handle territorial issues, the researcher added.

China is Vietnam’s top trading partner. The two countries have set a target for bilateral trade to reach more than US$100 billion in 2017.