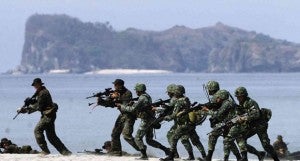 The military will be conducting more surveillance in the West Philippine Sea following China’s pronouncement that it would be building more structures on the artificial islands in the contested area.

Asked if the military was alarmed that China had continued its reclamation efforts in the disputed territory, Armed Forces of the Philippines chief Gen. Gregorio Pio Catapang Jr. said it would double check if China had indeed expanded its reach.

“We still have to verify it, we will conduct another reconnaissance in the area,” Catapang said.

Catapang said it would follow the lead of the Department of Foreign Affairs (DFA) on the issue.

“The lead here is the DFA. We are just standing by their next move. We have already proven that, indeed, China has put up reclamation in the area that is not consonance with international law. So it’s the DFA’s move,” the military official said.

The Philippines is locked in a maritime row with China, which is claiming nearly 90 percent of the South China Sea.

Without a strong military to show force, the Philippines has adopted a rules-based, diplomatic approach to resolve the issue, filing a case against China with the United Nations arbitral tribunal.

The Philippines also took on a multilateral approach to deal with the maritime dispute, recognizing that there are other claimants within Southeast Asia.

Earlier, China said the land reclamation of reefs in the Spratly Islands is nearing completion and that more infrastructure will be built for maritime search and rescue and environmental conservation scientific research.

This despite an ongoing case before the United Nations filed by the Philippines, challenging China’s actions in the disputed West Philippine Sea.

The independent polling outfit said eight in 10 Filipinos are worried that China’s expanded presence in the disputed region could lead to “armed conflict” with the world’s most populous nation.

The SWS said this sentiment had weighed on people’s minds since the Philippines backed down from a tense standoff with China over control of rich fishing grounds around Scarborough Shoal in 2012.

The study showed 84 percent of 1,200 respondents were “worried” about armed conflict with China.

Malacañang yesterday acknowledged the fears of people, saying it is in the “best interest” of the country to resolve the maritime dispute with China through diplomatic means.

“It’s natural for people to worry about armed conflict because it’s a given that in conflict, no one wins,” deputy presidential spokesperson Abigail Valte said. With a report from AFP