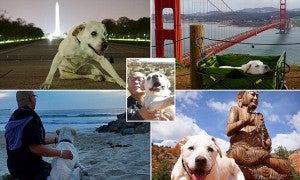 Earlier this year, Neil and his fiancée received terrible news from the veterinarians:  Poh had renal failure, and his kidneys are failing. They adjusted his diet and returned to the doctors after a month only to be told of worse news. The vets found a softball-sized tumor in his liver and multiple tumors in Poh’s abdomen, which they deemed inoperable.

Confronted with this development, Neil decided to make a bucket list for them to do in the next few months while Poh can still walk around and travel. He said he had always wanted for Poh to experience the waters off the Pacific coast.

To document their big coast-to-coast adventure, Neil started an Instagram account for Poh, who incidentally was named after Edgar Allan Poe.

Around March this year, Neil, his fiancée Yuko Ogino and Poh began their journey as a family, stopping in tourist spots and taking photos for Poh’s IG followers. On March 5, Neil posted the first image of Poh, with the hashtag #pohthedogsbigadventure.

Along with the photo, Neil wrote: “Hi everyone, my name is #pohthedog. I look like a pup but I’m 15 years old, 105 in dog years, and although I am young at heart and my mind is willing, my body is going through the natural process of old age.

“My parents found out that I have a couple of very large tumors growing in my abdomen which are inoperable. So my dad @djneilarmstrong decided to give me a bucket list trip across the good old US of A… traveling from #nyc all the way to the west coast, from sea to shining sea.”

“I knew then that he had a limited time to live. I just didn’t want to leave him and go to a gig. If he passed away while I’m gone, that would be devastating,” Neil shared.

That is why he and his girlfriend then (now fiancée) decided to go on a road trip to the West Coast, anchored on a show he was supposed to do in Phoenix. It ended up as a 35-city tour across America done in 46 days.

The doctors told them Poh could die any moment so it was imperative for them to leave.

“You just got to live life to the fullest, that’s the lesson learned,” Neil remarked. “In the grand scheme of things, everyone’s going to die, but it is up to you to do something while you’re living.”

When we did the interview, Neil said Poh had around 5,000 followers on Instagram. When the story broke on May 27, his followers quadrupled to 20,000. Almost a week later, Poh’s followers were almost 100,000 strong.

“I do have a pretty decent social media following as DJ Neil Armstrong and I wanted to separate the account from that because I didn’t want to inundate people with Poh’s photo stream,” Neil said.

Poh and his great adventure has been featured on websites such as Good News Network, Mashable and Huffington Post to major stations such as ABC, PIX and CBS.

Asked how much he loves Poh, Neil paused and composed himself, “I’ve started, ended a bunch of relationships, got fired from jobs, started new jobs, became Neil Armstrong and have all these crazy things happen to me, the only thing constant during those periods was my dog, Poh so he’s like my child, my constant, the reason I would come home. He’s definitely one of the most important in my life.”

This is why Neil believes that Poh’s story resonates with a lot of people because of the innate relationship people have with their pets. He has received messages saying that the bucket list he shared with Poh is something that some of his followers should have done with their pets when they had the chance. That they are living vicariously through the posts on Poh’s Instagram page.

With a tinge of regret, Neil said he should have done this when Poh was stronger so that he could have ran as much as he wanted when they visited the Southern California beaches. “I wish I was able to do this with my dog when I didn’t have to put him in his cart and would just let him run wild in the ocean,” he quipped.

He is thankful though that they got to spend seven wonderful weeks with Poh on this road trip of a lifetime.

“Most people cannot do that because they have 9-to-5 jobs, school, people have children, it’s not a viable option. But because of my life as a DJ, I can make money on the road, I have a free schedule and we were able to complete something that a lot of people with they could,” Neil said.

The three had general places they wanted to go. Neil had extra fun visiting “Breaking Bad”’s Walter White’s house in New Mexico and The Goonies’ house in Oregon.

“Poh loved the ocean, anywhere with water, which I think has healing property. We went to the original dog beach in San Diego and various dog parks along the coast where all the dogs are off-leash. He really liked the airport vortex in Sedona,” he said. 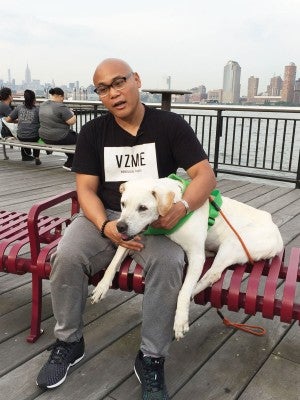 “I don’t really subscribe to the borderline hippie stuff but I saw it first-hand. I’ve never seen anything like that before. If you look at the trees, they grow in a spiral pattern because they’re forced by unseen magnetic, spiritual I don’t know, forces. Poh usually is panting because it was hot and when we got into the vortex, he passed out, to the point where I thought there was something wrong,” Neil added.

Everything was documented. From Poh’s photos in Washington, DC with the historic monuments to Route 66 to the Las Vegas Strip and the Hollywood Walk of Fame (where Poh posed on Godzilla’s star) to Seattle’s Space Needle.

But they needed to cut the trip short because Poh became too ill to continue travelling. Neil said Poh had suffered from a bad seizure.

It has been five weeks since they returned to their home in Queens.

He gives Poh daily IV fluids and supplements to help the kidneys which are no longer functioning fully. “It’s a pretty intense ritual for us. I give him a bunch of supplements and it’s like fighting with a child, he doesn’t want to eat it, he spits it out and I have to trick him. He’s also become very picky with his food,” he shared.

The past week has been crazy as both Neil and Poh graciously granted TV and print interviews as more and more people are learning about their very emotional story.

“Dogs are hyper-perceptive. When you get sad, they sense it and they come to you and take care of you. He’s always been weird with me, he thinks he’s in charge and he owns me,” Neil added, laughing.

After our interview, Neil posted a photo of Poh with the lighted World Trade Center and the downtown New York skyline as a background. He wrote, “Phew… Such a busy day. So many Internet media outlets have covered#pohthedogsbigadventure! And I was on TV all over the world today you guys have helped me check off a couple of things on my bucketlist I didn’t even think of adding. Thank u for joining me on my journey everyone good night from nyc!”

“I’m just hoping now that I don’t have to deal with that situation where I have to put him down,” Neil responded when we asked if he has considered all his options, particularly if and when Poh becomes too sickly and will be in too much pain. “If ever we come at a point where Poh will make it clear that he is in a lot of pain and that he can’t take it anymore, of course, as much as I want him to stick around as much as possible, I wouldn’t want him to suffer.”

A liver of good news for Neil, fellow dog owners who have been on this path have told him that Poh looks like he is nowhere near that point where there is extreme suffering because he still has full control over his bowel movements and he is still eating.

That, and a hundred thousand followers (and counting) in the online community who have become avid supporters offering prayers for Poh’s health and wellbeing.

“You want unconditional love, go get a dog. They’ll love you no matter what and I hope that people who have the financial means and have the time do that. When all is said and done, you will realize that it’s the pet taking care of you,” Neil said.