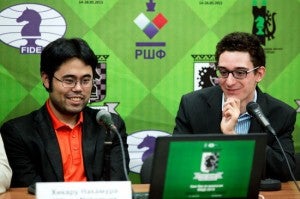 Fabiano Caruana, Hikaru Nakamura and Wesley So provide the U.S. a realistic shot at the gold medal in the chess Olympiad in 2016 in Baku, Azerbaijan, which Americans won for the last time in Israel in 1976.

The Soviet Union and other countries boycotted that Olympiad in Haifa for political reasons, and the U.S. came close to winning only one time after that — in 1998 when it won the silver in Elista, Russia.

China is the new king of the block after winning the last Olympiad in 2014 in Tromso, Norway, but the Americans are coming in force.

The arrival of the 22-year-old Caruana, an Italian-American, gives the U.S. more than an even chance.

Rated No. 2 in the world in live ranking with 2,805 points, behind only world champion Magnus Carlsen of Norway, with 2,876 points, the hard-charging Caruana will be a strong anchor of the U.S. Olympic team.

The 27-year-old Nakamura, rated No.4 in the world in live ratings with 2,802 points, qualified for the Candidates Matches that will select the challenger to Carlsen in 2016, with a second-place finish in the Khanty-Mansiyk Grand Prix. 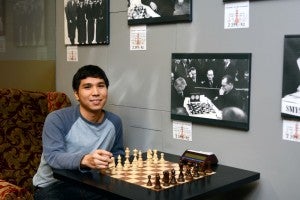 Chess grandmaster Wesley So in Prague.

The 21-year-old So, who joined the U.S. Chess Federation in October 2014, is currently rated No. 10 in live ranking, with 2,775.9, and currently playing a four-game series with Czech GM David Navara in Prague.

Expected to back up Caruana, Nakamura and So are young and experienced grandmasters, including Ray Robson, 20, former teammate of So’s in the Webster University chess team.

More importantly, the team is expected to receive full support from Rex Sinquefield, considered the godfather of American chess, and the benefactor of the Chess Club and Scholastic Center of Saint Louis.

In all these competitions, the great Frank Marshall participated, considered perhaps the greatest American Olympic player.

In the 1960s, Bobby Fischer came onto the chess scene and helped the U.S. win the silver in 1960 and 1966. In 1998 the Americans also won the silver in Elista, Russia, according to Wikipedia.