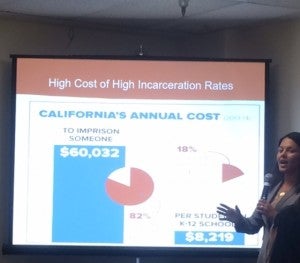 LOS ANGELES — Supporters of Proposition 47, which voters approved in the general election in November last year, briefed ethnic media journalists on the “life changing” impact of the law because it gives people convicted of non-violent felonies the chance to change those convictions to misdemeanors in their criminal records.

Prop. 47 made some non-violent property crimes, where the value does not exceed $950, into misdemeanors. It also made some simple drug possession offenses into misdemeanors, explained Carol A. Clem of Los Angeles County Public Defender. The proposition does not apply to individuals with a violent or serious crime convictions and those that are registered as sex offenders.

The briefing held at the Japanese American Cultural Center [JACCC] on June 12 included testimonies on how the new law is opening up new opportunities to people who had been identified as felons as a result of past non-violent offenses, as well as its impact on Asian American communities.

“My friend who wants to become a nurse has seven felonies and six of the felonies were reduced to misdemeanors which gives her hope,” states Rochelle Solombrino, who believes that it looks better to a possible employer that the crime is a misdemeanor and not a felony.

Solombrino, who once lived on Los Angeles’ skid row and served an 18-month prison term for non-violent offenses is now Operations Coordinator for the Fred Brown Recovery Services, Inc. and is looking forward to buying her first home. 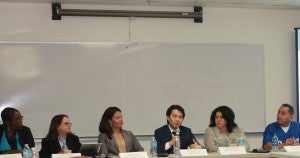 Proposition 47 Implementation Director of Californians for Safety and Justice Hillary Blout states that California has a high incarceration rate with an incarceration cost of $60,000 per person.

“I couldn’t even get Section 8 housing (low-cost) with my felony record,” adds Solombrino.

According to Californians for Safety and Justice, “Prop 47 helps you overcome barriers—approximately 1 million Californians with nonviolent felonies on their old criminal records face restrictions on work, housing, education and more—after they are sentenced.”

Showing that the “overuse” of felony convictions is not something unique to California, advocates say that, “many states are asking” are interested in Californians have been doing to reduce mass incarceration.

Advocates also highlight that “those who do not fit into the model minority description of Asian Americans (that) through hard work and perseverance you can achieve the American Dream,” have hope since Prop 47 overcomes some work, housing, education barriers posed by the cultural stigma of past incarceration.

Along with various ethnicities “there are some Asian American women with a criminal background of drug possession or theft that are seeking relief through the proposition,” states Associate Director Tiffany Johnson of A New Way of Life Re-Entry Project, which has been helping incarcerated women reintegrate into society for the past 17 years.

“Filipinos are obviously impacted as well in my work in San Francisco County, but I also know that they are taking advantage of this new law,” states Blout. Immigrants with two or more non-violent felonies can be removed from the “Priority Level 1 Enforcement” in deportation procedures.

“We do know that Prop 47 will have immigration implications, especially for people who are seeking DACA and DAPA relief,” says Atty. Paul Jung in an interview with Inquirer.

Through the proposition it may be possible to avoid extradition and potentially produce a, “immigration-safe” disposition depending on the immigrants’ status and type of felonies on their record.

“In theory, Prop. 47 would be able to narrow those specific cases eligible for the proposition and possibly avoid proceedings and deportation,” states Jung.

Advocates are currently working on a Tagalog-language Prop. 47 fact sheet and translation of other material to help spread the information.