Once a student, Palestinian returns to PH as envoy 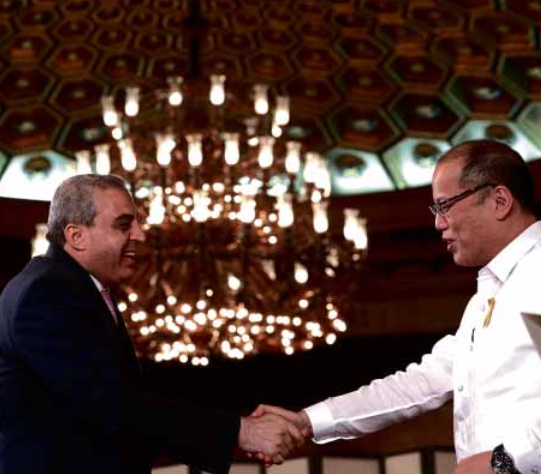 PRESIDENT Aquino receives new Palestinian Ambassador to the Philippines Anwar Al-Agha at Malacañang. Al-Agha as a young man studied in the country.

The new nonresident ambassador of conflict-afflicted Palestine to the Philippines was a foreign student in Manila in the 1980s up to early ‘90s who completed his undergraduate and graduate studies and learned to speak fluent Filipino.

Dr. Anwar Al-Agha calls himself a “product of Philippine education.”

Last Monday, he presented his credentials to President Aquino at Malacañang.

“Marami akong kabarkada dito (I have many friends here),” Al-Agha, 48, told the Inquirer in an interview.

Al-Agha first came to the Philippines in 1986, just after the People Power revolution that toppled the dictator Ferdinand Marcos.

He took up Mass Communication at Far Eastern University from 1986 to 1990, and after that obtained a Master of Arts in Teaching and Doctor of Education from the University of the East.

“I came here mainly to study. The Philippines is a lovely country that maintains a good quality of education and where English is the medium of instruction,” Al-Agha said.

Soon after leaving the Philippines, he worked as a television presenter and a university professor in Palestine. Later he took posts at the Ministry of Foreign Affairs.

He said he was glad to be back in the country after two decades and hoped to enhance relations between Palestine and the Philippines.

He is assigned to four other countries aside from the Philippines—Malaysia, Thailand, Brunei and Maldives. He and his wife are based in Kuala Lumpur.

He was in the country all of last week to attend the Independence Day celebration in Sta. Barbara, Iloilo, on Friday, along with other members of the diplomatic corps.

Al-Agha during the interview spoke fondly of his student days in the Philippines, even about the time he was mugged on Recto Avenue in Manila.

“I was held up one time after my class at UE,” he said chuckling.

He was 25 then and was close to finishing his studies at UE. A man approached and pointed a knife at him.

“He was drunk and he asked for my watch. I told him, ‘No, this is not a good watch.’ I dealt with him quietly,” he said.

Instead he gave the man all his cash amounting to P300. The man took the money and was about to walk away when Al-Agha realized he didn’t have any money left to get home.

“That was terrible. I asked if he could spare me some change,” he said, which the mugger gave him.

Al-Agha said he made a lot of friends in the Philippines, some while as a trainee at network giant ABS-CBN and who are bigwigs in the industry now.

During his courtesy call on President Aquino, Al-Agha extended the gratitude of Palestinian Authority President Mahmoud Abbas for the Philippines’ continued support of Palestine which has been locked in a territorial conflict with Israel.

In 2012, the Philippines was among the 138 countries that voted in favor of the United Nations resolution recognizing Palestine as a nonmember state.

In 1947, the Philippines was also among the first countries to vote for the two-state solution to the Palestine-Israel conflict.

“We thank the Philippines and the Filipino people for supporting the full recognition of the state of Palestine. We hope that very soon we will have a better situation,” Al-Agha said.

Palestine closed its embassy in Manila in the ’90s due to financial constraints, he noted.

But Al-Agha said he hoped the relations between Palestine and the Philippines would improve once the political situation in his country got better.