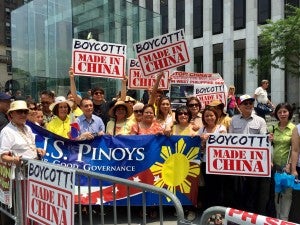 Filipino Americans rally against China anti-China in front of the Apple Flagship Store on Fifth Avenue in Manhattan. PHOTOS BY ELTON LUGAY

These were the words of business tycoon Loida Nicolas-Lewis, chair of the U.S. Pinoys for Good Governance (USP4GG), during a protest rally organized by the group June 12 in front of the Apple flagship store in Manhattan.

Dozens of protesters, mostly community leaders, joined Lewis in the activity as their way of commemorating Philippine Independence Day in the United States. USP4GG has been calling out China for three years now over the territorial dispute in the South China Sea.

“I have faith in God,” Lewis told INQUIRER.net. “God helps those who are oppressed and who are trampled upon. And He will not forget the Philippines. We are a people of faith.”

She is confident that the international community will back up the Philippines “because they [China] are thumbing their nose on international law.”

“If they [China] want to be a world power, they cannot be doing something illegal against international law,” Lewis said. “They will lose the respect of the nations. So all of these factors are not military might, but they are more powerful than submarines and anti-ballistic missile and jet planes. I am still hopeful they will back out. I know that this is almost impossible but miracles do happen. Look at People Power!”

Elaine Hazzard, a lawyer, playwright and scholar on the Philippines who spoke at the rally, noted the role of the U.S. in the territorial dispute. “I will tell you what China is doing in the so-called South China Sea is horrible,” she said. “It is thieving land and ocean from the Philippines and from other Southeast Asian nations. The U.S. as an important Pacific power must stand up against China for what they’re doing and not allow this to take place.” 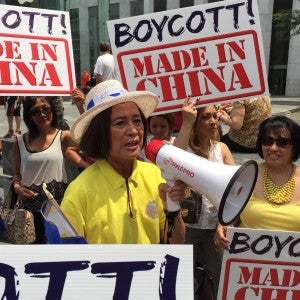 Not against Chinese people

Frank Celoza, eastern region vice-chair of the National Federation of Filipino American Associations, drove his car for four hours from Boston just to join the rally. He emphasized that the protest was not against the Chinese people, but against the Chinese government.

“They ambush our 200-mile exclusive economic zone—that land, that piece of rock belongs to the Philippines. They are trying to tear it [apart] because underneath those rocks are almost 12 billion barrels of oil that they would like to get,” he said.

The protesters chose the Apple flagship store as their backdrop in order to highlight a plan to boycott products from China. “Apple has so many factories in China, they should get out of China… come back to America and give the work to Americans or go to the Philippines because they are good workers,” Celoza said.

Ryan Letada, founder of NextDayBetter and Filipino Young Leadership Program member who also joined the rally, encourages second- and third-generation Fil-Ams to understand and care about issues concerning the Philippines.

“It’s incredibly on point that young people are educated about what’s happening in China or the Asean region so that we could understand what it means to be actually independent and to fight for that, and to continue that legacy of what people have fought for us,” he told INQUIRER.net.

The protesters were united in their outrage over Beijing’s increasing reclamation activities in the South China Sea, some decrying the Chinese government for destroying coral reefs in the area while others for harassing Filipino fishermen. 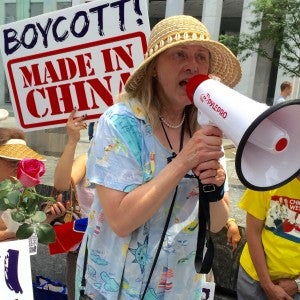 Elaine Hazzard, a lawyer, playwright and scholar on the Philippines, says the US must stand up to China.

“I have been rallying with USP4GG for a number of years now and it’s disheartening to know that China is getting more aggressive, it’s really scary,” said 80-year-old Lumen Castaneda, president of Pan American Concerned Citizens Action League.

“The Philippines should start moving. I am disheartened to know the condition of our soldiers who are patrolling the area. They don’t have cannons, it’s so pathetic but in spite of that, I salute these soldiers for having the fighting spirit to hold the fort,” Castaneda added.

China has overlapping claims with the Philippines, Vietnam, Malaysia, Taiwan and Brunei in the South China Sea, where $5 trillion worth of ship-borne trade passes every year.

U.S. Defense Secretary Ashton Carter reiterated during the Shangri-La Dialogue in Singapore last month that the U.S. wants a peaceful resolution of the South China Sea dispute and an immediate halt to land reclamation activities in the area. He added that America stands ready to “oppose coercive tactics” and called on ASEAN and China to conclude a code of conduct this year in order to protect the rights and interests of all.

According to Lewis, if China wants to be a world power, it must follow the rule of law and the U.N. Tribunal.