A day after he snubbed an affair with President Benigno Aquino III, Chinese Ambassador to the Philippines Zhao Jianhua expressed optimism that Beijing and Manila would be able to resolve their maritime dispute.

In a statement on Tuesday, Zhao took note of Aquino’s “positive remarks” at the event on Monday night at the Philippine International Convention Center (PICC).

“We believe that our two countries can properly handle our differences,” he said. “We look forward to working with the Philippines to further promote bilateral commerce, trade, tourism and people-to-people exchanges so as to make sure our bilateral relations can enjoy a bright and prosperous future,” Zhao said.

In his remarks to the gathering, the President noted the special friendship between Philippine and Chinese nationals and stressed the need to develop “stronger relationships” between the two countries.

“There is much that the Philippines can improve on its relations with China,” Aquino said.

Monday marked Filipino-Chinese Friendship Day and the 40th anniversary of the establishment of diplomatic relations between the two countries. 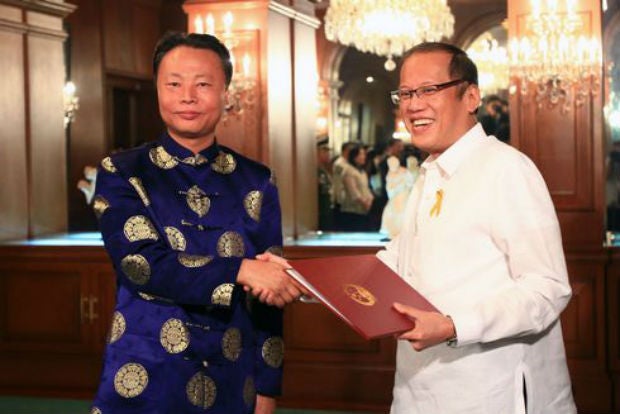 Zhao had been invited to address the PICC event on Monday evening and lead the ribbon-cutting, alongside the President, at a photo exhibit. The ambassador was a no-show, but Aquino proceeded to deliver his address.

Angel Ngu, president of the host Federation of Filipino-Chinese Chambers of Commerce and Industry, later Monday night told reporters that the friendship day celebrations had been scrapped and instead the event should be an advance commemoration of Philippine Independence Day.

“Although there is no war, there is a word war and so we think it would be best not to push through with it,” Ngu said, referring to the friendship day celebrations.

“We all see that the tension in the West Philippine Sea seems to be escalating. So we think that this is not a good time,” Ngu told reporters.

“We all thought to just have the celebration of Philippine Independence Day rather than have a celebration of Filipino-Chinese Friendship Day,” Ngu said.

Ngu said canceling the friendship day billing was “the prudent action” in light of what had been happening in the South China Sea waters.

Asked if the tension was already being felt by the Chinese-Filipino community in the Philippines, Ngu said it was “concerned about what is happening in mainland China.”

“I am a Filipino and I love the Philippines but I don’t want the Philippines to have a conflict with where my father came from,” Ngu said.–With a report from Jerry E. Esplanada

Read Next
PH teener off to Sudan for life-saving surgery
EDITORS' PICK
Luxe property: A way to build, preserve wealth
Honolulu Café is the cure for your Egg Tarts and Roastings cravings
PH detects local transmission of Omicron subvariant BA.2.12.1
OVP: Pilot’s claim vs Robredo ‘never happened’, a ‘malicious fabrication’
House energy committee chair Arroyo bats for cheap electricity
Petition to reverse Comelec decision on Bongbong Marcos’ DQ case reaches SC
MOST READ
Heart Evangelista gets a ‘no’ from Chiz Escudero after asking, ‘Do I deserve a bag?’
PH needs P326 billion yearly to pay debts
Closure order vs Megaworld Corp halted as firm vows cooperation with BIR – exec
Leni and the future of the Pink Movement
Don't miss out on the latest news and information.