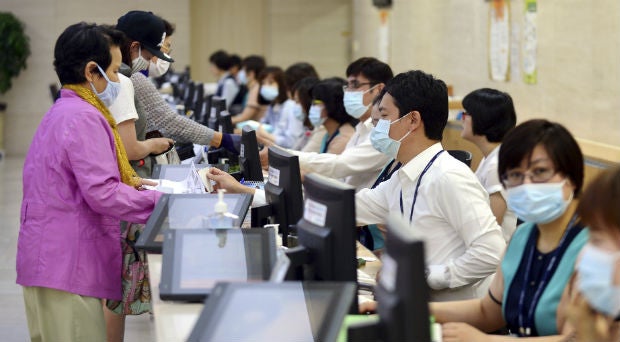 Hospital workers, right, wear masks as a precaution against Middle East Respiratory Syndrome virus as they talk with visitors at Chonnam University Hospital in Gwangju, South Korea, Monday, June 8, 2015. South Korea on Monday reported its sixth death from MERS as authorities were bolstering measures to stem the spread of the virus that has left dozens of people infected. AP

The Department of Health (DOH) on Tuesday confirmed that a doctor-couple from South Korea, who had treated a patient with the Middle East respiratory syndrome coronavirus (MERS-CoV), had visited the Philippines recently but both were asymptomatic for the disease.

“So it means somehow that we don’t have a problem because they were asymptomatic,” said Dr. Vito Roque Jr., officer in charge of the DOH epidemiology bureau, in an interview with reporters on Tuesday.

Roque reiterated that the Philippines remained MERS-CoV free and the government was not letting up on precautionary measures to ensure that the virus won’t reach the country.

Roque said that MERS-CoV, while deadlier than its cousin, the SARS virus, was less transmissible. The virus is spread from an infected person’s respiratory secretions through coughing or sneezing, usually after close contact.

The virus cannot be spread if a patient is asymptomatic or not showing symptoms, such as fever with cough, a cold and sneezing, difficulty in breathing and gastrointestinal problems, he said.

“The doctors, who are a couple, did not have travel restrictions. Which means that by the gauging of the government of South Korea and its health department, they did not pose a risk to the public and were not sick,” Roque said.

He said the DOH was coordinating with its counterpart in South Korea to get more details about the couple’s trip to the Philippines over the weekend of June 6-7.

“To date, the Philippines is still safe and no cases of MERS-CoV have been recorded in the country,” he said.

The MERS-CoV outbreak in South Korea was traced to a 68-year-old man who returned from the Middle East and developed fever and a cough eight days after.

According to reports, the South Korean doctor-couple have their clinics in Sunchang, North Jeolla province.

The husband, an orthopedic surgeon, treated a 72-year-old woman who came to his clinic on June 2 for a backache.

The same patient then consulted the surgeon’s wife, the head of an internal medicine facility near her husband’s clinic, two days after when she developed a high fever. On June 7, the patient was confirmed positive for MERS-CoV.

“There is no cause for alarm. We have not detected any passenger who might be sick,” said one health officer.

Even before the MERS-CoV outbreak in South Korea, the Naia’s human quarantine section had been implementing strict measures to ensure that the Philippines remained free of the respiratory illness.

According to the airport health officer, who requested anonymity for lack of authority to speak on the matter, the unit has been on heightened alert since last year when the DOH issued a MERS-CoV advisory.

“We did not change our procedure in processing passengers because it has been effective. There is still no reported MERS case here,” she told the Inquirer, adding that foreigners had been complaining about the strict measures.–With a report from Jeannette I. Andrade