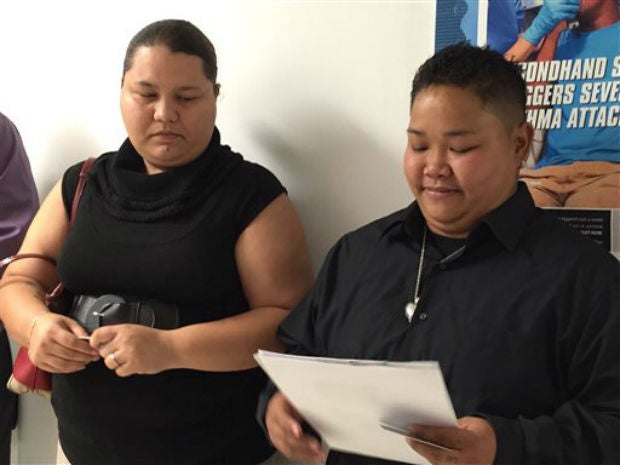 This April 8, 2015 file photo Loretta M. Pangelinan, 28, right, holds the application for a marriage license that she and her fiancee, Kathleen M. Aguero, 28, will turn in at the Office of Vital Statistics in the Guam Department of Public Health and Social Services. AP

HAGATNA, Guam — The lesbian couple who sued to overturn a gay-marriage ban were put to the front of the line Tuesday when Guam became the first U.S. territory to recognize gay marriage.

Loretta M. Pangelinan, 28, and Kathleen M. Aguero, 29, drew the No. 4 slot as couples were assigned numbers when the Office of Vita Statistics at 8 a.m. Tuesday. But out of respect, they were allowed to be the first gay couple to get their marriage license.

They plan a big wedding with friends and family on July 4. But they still had another role to play at the official territorial office after applying for their license.

The couple who drew No. 1 were Deasia Johnson of Killeen, Texas, and her fiance’, Nikki Dismuke, 37, of New Orleans, and they asked Pangelinan and Aguero to be witnesses for their ceremony, which was held immediately.

“How can you not be emotional?” said Pangelinan, who began to cry when she heard the request.

Johnson and Dismuke said they have been together three years, the same amount of time they have wanted to get married.

They already have had a commitment ceremony, but they didn’t get a wedding certificate.

“I’m not walking out here until I get it in my hand,” Johnson said after a marriage ceremony that lasted less than a minute in Public Health Director James Gillan’s office. They kissed after becoming the first gay couple to marry in Guam. 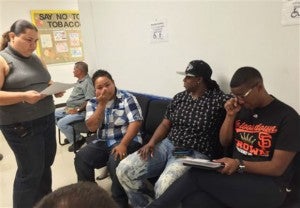 At least three same-sex couples were in line for marriage licenses during the office’s first few hours of business, and two other couple picked up applications, said Bill Pesch, one of the lawyers representing Pangelinan and Aguero.

“It’s been a long time coming, and we really couldn’t be happier,” he said.

Gay marriage in Guam became possible after U.S. District Judge Frances Tydingco-Gatewood on Friday struck down Guam’s prohibition on same-sex marriage. The developments in Guam also come as the U.S. Supreme Court prepares to issue a decision on the constitutionality of same-sex marriage this month.

Pangelinan and Aguero sued April 13 after a registrar denied them a marriage license because Guam law defines marriage as between two people of the opposite sex. The couple based their lawsuit on a 9th U.S. Circuit Court of Appeals decision in favor of same-sex marriage. The U.S. District Court of Guam falls under the 9th Circuit.

That same month, Guam Attorney General Elizabeth Barrett-Anderson directed officials to begin processing same-sex marriage applications, but territorial officials, backed by Gov. Eddie Calvo, refused. The governor sued, and he was represented by an outside firm because the attorney general didn’t agree with the governor’s lawsuit.

Although the ban was struck down Friday, Tydingco-Gatewood gave the territory a couple of days to prepare the marriage applications.

Lillian Lee, 57, and her partner, Susan Diaz, 65, were also in line to get their marriage license application. Lee thanks Pangelinan and Aguero for making “gay marriage possible.”

“I’m happy to be married on Guam,” she added.

Currently, gay couples can marry in 36 states, the District of Columbia and Guam.

About 160,000 people live on Guam, an island about 3,800 miles west of Hawaii. Its residents are U.S. citizens, but they don’t have the right to cast ballots for the country’s president.

The territory elects a delegate to the U.S. House, but the delegate is not allowed to vote on legislation. Guam has no representation in the U.S. Senate.