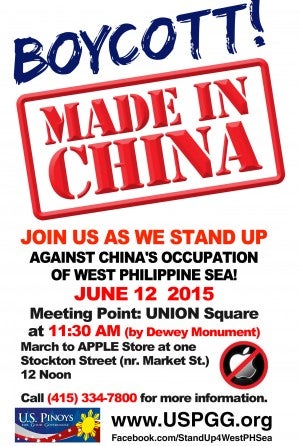 The most meaningful way to celebrate Philippine Independence Day on June 12 is by boycotting “Made in China” products until China abandons its illegal invasion, occupation and militarization of the Philippine territories in the West Philippine Sea.

This was the message of Loida Nicolas-Lewis, national chair of the US Pinoys for Good Governance (USPGG), which is calling for June 12 anti-China protest actions by Filipinos and their allies all over the United States and all over the world. In the U.S., the Independence Day protest activities will target Apple and Wal-Mart stores which primarily sell products manufactured in China.

“While we cannot individually fight China militarily, we can do so economically by boycotting Made in China products. Since the largest distributors of China products in the U.S. are Wal-Mart and Apple, that is why we are calling for a boycott of those stores,” Ms. Nicolas-Lewis explained.

A sustained, organized boycott of China-made products may have been a factor in the unexpected decline in China exports to the U.S. According to Reuters (“China exports just fell off a cliff” April 13, 2015), China reported that its exports to the U.S. and other countries “fell by a massive 14.6% in March from a year ago”. This surprised many economists who had projected that China’s exports would increase by double digits in 2015. 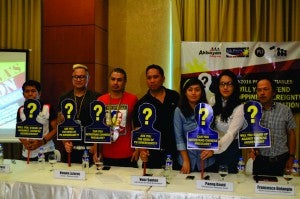 In the Philippines, a “Martsa para sa Kalayaan” (March for Freedom) is planned for June 12 at 12 noon in front of the China Consulate in Makati located at the World Center at 330 Sen. Gil J. Puyat Avenue. The protest rally is sponsored by the Di Ka Pasisiil Movement led by former Rep. Roy Golez.

Jose Rizal M. Reyes and Eufemio Agbayani III of the Martsa para sa Kalayaan Network (MKN) announced the participation at the Makati rally of the Bantay Bayan, ROTC Philippines, the United Filipino Seafarers and the Filipino Patriotic Solidarity Movement among other groups.

Do an anti-China selfie

Those who cannot physically attend the protest rallies are asked to join their selfie campaign. “Please take a cell phone photo of yourself holding a sign saying “China, go away! #Kalayaan is ours!”, “China, alis diyan! Amin ang #Kalayaan!”, or a translation of that in your local language. You may pose in front of the Philippine flag or map. Post the selfie in your timeline, use it as a profile picture, and tag the Martsa para sa Kalayaan Facebook page,” Reyes urged. 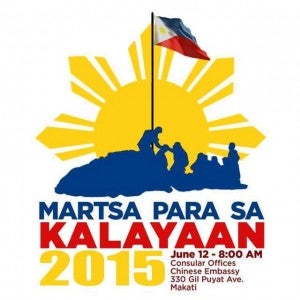 Vonz Santos, chairman of the “Filipinos Unite” (FU) movement of Philippine artists who aim to use their music to call for Filipinos all over the world to unite against China’s bullying of the Philippines, joined other youth groups in a press conference on June 4 in Manila calling on Philippine presidential candidates to publicly state their positions with regard to Chinese incursions in Philippine waters.

“Our political leaders … owe the country a clear stand on Chinese aggression in Philippine waters. China’s intensified reclamation and militarization in the West Philippine Sea is an act of occupation and annexation. These are direct threats to our independence and sovereignty,” according to Akbayan Youth Chairperson Rafaela “Paeng” David.

The groups made the calls after observing that many political aspirants remain quiet on the issue despite escalating tensions in the region “We deserve leaders who will defend our country’s sovereignty in the face of mounting pressures from a power like China and can articulate what direction our country must take to achieve that,” David said.

The groups also urged the Aquino government to suspend its plan of joining the Asian Infrastructure and Investment Bank (AIIB), a new financial institution being proposed by China as an alternative to the World Bank and the Asian Development Bank (ADB), until China backs down on its continued reclamation works in the West Philippine Sea and halts its harassment of Filipino fishermen in the area.

“We call on the government not to participate in China’s new regional financial venture as a direct form of protest against Chinese aggression in Philippine Territory. Indeed, we cannot fully embrace this new regional financial institution without any assurance from the Chinese government that it will not be used to leverage their position against us. The only way to show their good faith is to withdraw its forces in areas under our country’s exclusive economic zone (EEZ) before we consider joining the AIIB,” David said.

Vonz Santos also criticized Vice President Jejomar Binay for “openly undermining our country’s strong position against China’s expansionism. As such, a Binay presidency will bring us back to the old days of the Arroyo presidency when our country bowed down to Chinese pressure and agreed to a lopsided deal with the Chinese government to exploit our oil and gas resources,” Santos said.

“It will be a disaster for the country to have a president abandoning our country’s sovereignty and territory in exchange for a joint venture deal. It will embolden Chinese aggression in the West Philippine Sea and we will lose face with our regional allies. Our sovereignty has no price,” Santos warned.

Student Council Alliance of the Philippine (SCAP) Chairperson Iska Dalangin also called on the public, especially the youth, to voice their opposition to China’s aggression in the West Philippine Sea. The group said that the ongoing tensions between the Philippines and China required new heroes to stand up for the country’s sovereignty.

In San Francisco, the Filipino community will officially celebrate Independence Day on June 12 at a $100 per person gala at the City Hall hosted by Mayor Ed Lee. But members of the Northern California chapter of USPGG are urging the Filipino community to celebrate Independence Day “meaningfully” by converging at the Union Square at 11:30 AM on June 12 to then march to the Apple store a block away to picket and call for a boycott of China products.

“The traditional way of celebrating Philippine Independence by holding galas is not appropriate for the crisis that is happening now. China has illegally invaded and occupied seven Philippine shoals which it has converted into artificial islands by pouring sand and concrete over Philippine coral reef destroying our marine ecology. We have to stand up to this major threat to the national security of the Philippines,” Ted Laguatan, USPGG spokesman said. 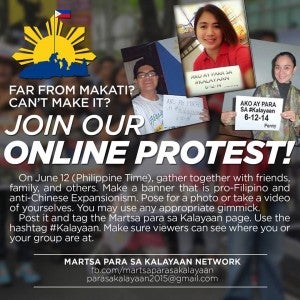 In New York City, Loida Nicolas-Lewis will personally lead the picket of the Apple store at Fifth Avenue and 58th Street on June 12 at 11:30 AM.

The Washington DC June 12 protest will be held at 11:30 AM at the Wal-Mart Supercenter located at 99 H Street NW Washington at the corner of H and 1st Street in Chinatown.

The Southern California chapter of USPGG chaired by Rocio Nuyda is organizing a picket of the Wal-Mart store in Los Angeles at 701 Cesar Chavez Avenue on June 12 at 12 noon. The L.A. picketing will be led by Arturo Garcia who will be joined by members of the Filipino American Community of Los Angeles (FACLA) and the Knights of Rizal.

In Chicago, the USPGG chapter will picket the Apple Store located at 679 North Michigan Avenue at 12 noon on June 12.

In Guam, the protest rally will be held on June 12 , from 11:00 to 1:30 pm at the Tamuning Mayor’s Community Park, across ITC Building corner North Marine Corps Drive and San Antonio Road, Tamuning, adjacent to signature factory outlets and a shopping center that sells Made in China products.

In Saipan, the June 12 protest will take place from 10AM to 1:OO PM at the Kilili Pavillion on Beach Road in Susupe where made in China products are sold.

Filipinos in other US cities are also planning to celebrate June 12 Independence Day by picketing Apple and Wal-Mart stores and by boycotting made in China products to express their opposition to China’s invasion of Philippine territories.

As the Martsa para sa Kalayaan Network (MKN) organizers suggested, supporters who cannot attend any of the scheduled rallies can take a selfie of themselves with a protest China sign and send it to the USPGG.org or post in on Facebook at Stand Up for Scarborough Shoal or Twitter at ‪#‎StandUp4WestPHSea.