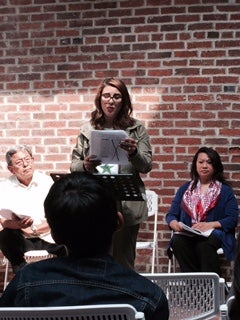 “Kababayan LA” TV host G. Tongi were among the featured readers of the cultural exhibit. PHOTOS BY DANTE OCHOA

LOS ANGELES — An exhibition called “Kwento Engkuwentro,” including readings of Filipino folk tales and memoirs, marked Asian Pacific American Heritage Month, May 1 to 31 at the Pico House, a historic building built in 1869 as a hotel across the old Los Angeles Plaza on Olvera Street and El Pueblo de Los Angeles Historic Monument. 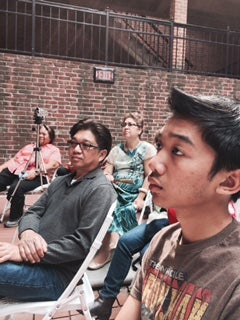 Seven Stories from Seven Sisters: A Collection of Philippine Folktales was self-published in 1991 by seven women authors bellowing to the Philippine American Women Writers and Artists (PAWWA). It is a collection of folktales told by their mothers, lolas, titas to lull them to sleep as children. The authors are Cecilia Brainard, Cecile Ochoa, Fe Koons, Susan Montepio, the late Valorie Bejarano, Nenutzka Villamar and Mariquita Davidson.

“I love these folktales from ‘Seven Stories’ which I remembered reading to my kids some 20 years ago,” said Kimbrough.

These are folktales about the “tikbalang” (half horse-half man that haunts certain trees, scaring children who dare venture into the streets after dark); of beautiful dames who protect the environment, like “Maria Makiling” from the Tagalog region and Bolak Sonday” from the Muslim South, among others.

Another collection of works by Filipino American authors about life in Los Angeles’ Historic Filipino Town and elsewhere was celebrated in the exhibit: Filipino Town: Voices from Los Angeles,” by Carlene Sobrino Bonnivier, Gerald Gubatan and Greg Villanueva. 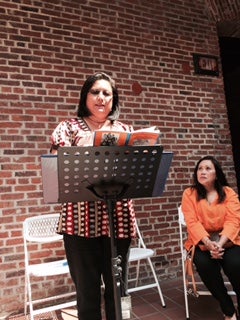 This anthology brings to life memories of Filipinos in the 1930s and ‘40s, Downtown LA. One of the stories recalls the writer John Fante renting a room in one of the old Victorian houses just a few blocks from the Chinese and Filipino restaurants on Temple and Figueroa. Fante was a friend of fellow writers William Saroyan and Carlos Bulosan.

Sponsored by FilAm ARTS, Saysay project and the city’s El Pueblo Historical Monument, the exhibit also featured the work of visual artists exploring the folklore and beliefs of the diverse people who have come from all over to make Los Angeles their home.

The work of animator and artist Fred Carrillo, who illustrated the Seven Stories folktales was also featured.  Carrillo is remembered in the Philippines for his illustrations from 1950s in Hiwaga Komiks, Liwayway, Graphic, among others, until he immigrated to the US in the ‘70s.   The award-winning illustrator was a sought-after animator for Marvel, Disney, Filmation, DC comics, among others. 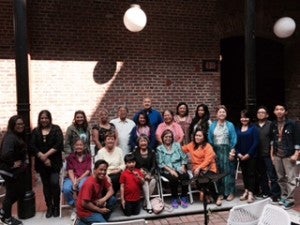 Fred Carrillo’s son, Darryll, recalled that his father was among the primary artists contracted by Filmation to work on its highly successful He-Man and its sequel She-ra and the Masters of the Universe series. Carrillo passed on in 2005.

Tongi, the popular host of “Kababayan LA” on Channel 18, was pleasantly surprised to discover that a Filipino had illustrated her favorite cartoon show “She-Ra.”

“Oh my god, I followed She-Ra: Princess of Power as a kid in the ‘80s!” Tongi was among the artists who attended the readings and read from the Filipino Town anthology.

Aside from Tongi, other community figures who read from the anthologies were Joselyn Geaga Rosenthal, Fe Koons, Joe Bernardo and FASGI Executive Director Yey Coronel-Alcid.

Kimbrough and Canizares noted in the program that “without the stories and the lore, the people have no distinct and shared identity.”