globalnation /
‘I AM HERE TO BE WITH YOU’

The CBCP on Thursday launched the 160-page book “I am here to be with you,” which documents the visit of Pope Francis to the Philippines from January 15-19.

CBCP President and Lingayen Archbishop Socrates Villegas described the book as the second-best documentation of the Papal visit.

“The best documentation of the Papal visit is the one hundred million Filipinos touched by Pope Francis,” Villegas said in his message before Catholic devotees.

“Let us open our hearts to his message of humility, humanity and his humor and please keep in mind that better than the book, you are the best documentation of the papal visit,” he said.

He said Pope Francis came to the Philippines not as an Argentinian speaking a different language. 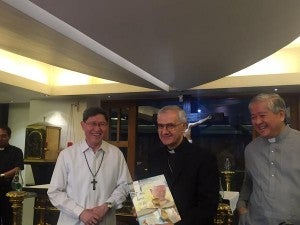 According to Manila Archbishop Luis Antonio Cardinal Tagle, the book would serve as a reminder to Filipinos to keep the teachings of Pope Francis alive.

READ: Francis on PH visit: It rained on my parade, but beautiful!

He said being able to witness Pope Francis was not just a privilege but a “mission.”

He recalled Pope Francis saying to him that “there is a future of the church in Asia” after visiting Asian countries for his apostolic tour.

The Papal book contains photographs during the five-day visit of Pope Francis including the full text of the speeches he delivered during his apostolic visit.

First-hand narratives of Tagle were also included in the book as well as messages from people who had a close encounter with the Pope.

The book will be exclusively distributed by Goodwill Bookstore and the Catholic Book Center for P1,200. IDL