Francis on PH visit: It rained on my parade, but beautiful! | Global News
Close
menu
search

Francis on PH visit: It rained on my parade, but beautiful! 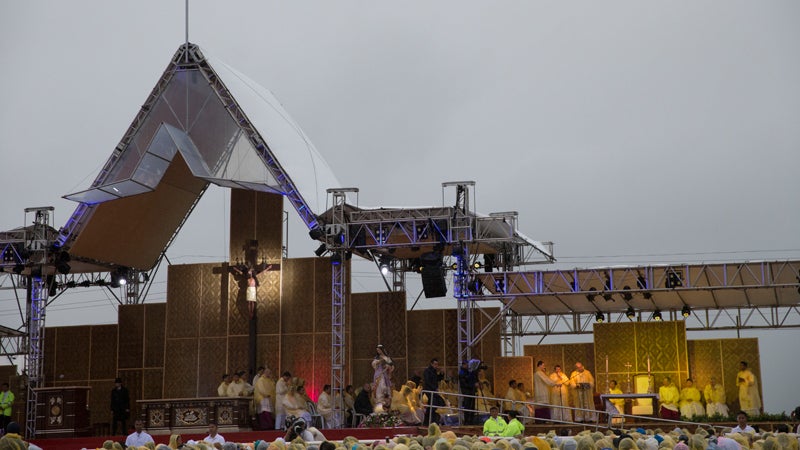 Asked what moved him most in the Philippines, Pope Francis said that it would have to be the Mass in Tacloban City (pictured), where tens of thousands gathered to welcome him and celebrate Mass with him despite a coming storm. AP

VATICAN CITY—Pope Francis visited the Shrine of the Madonna at the major basilica of Saint Mary Major in Rome right after he arrived on Monday from the Philippines, where his apostolic visit drew millions, the biggest crowd yet of his two-year papacy.

Vatican officials said the Pope performed his by now customary practice of starting and ending his foreign trips with a visit to the shrine of the Blessed Mother, offering her flowers and prayers for thanksgiving for the safe journey.

He had reason to thank Mary when he embarked last Jan. 12 on his second Asian tour amid dire security threats, compounded by terrorist attacks on a Paris publication satirizing Islam.

He went to Sri Lanka just after it had crushed the Tamil Tiger rebellion and undergone a political leadership transition, and proceeded to the Philippines, scene of an assassination attempt in 1995 against St. John Paul II by a nascent movement that became the extremist al-Qaida Group.

Memories of the 1995 assassination attempt were banished during Francis’ successful visit to the Philippines, called by Vatican journalist John Allen as “the home court of any Pope.”

Basking in the afterglow of Sunday’s Mass at Manila’s Rizal Park, which drew 6 million people cheering him on despite the rains, Francis said he learned from Filipinos how it was to express one’s happiness “with the heart” and without fakery.

At a press conference with the international media during the PAL flight that took him back to Rome, the Pope said of his Philippine visit: “It was challenging and as we say in Spanish, ‘pasada per agua (it rained on my parade). (But) it is beautiful.”

Gesturing how Filipino fathers struggled to raise their children up so he could bless them and of their gratitude when he ordered his convoy to stop so he could oblige, the Pope remarked in Italian:

“The gestures are not like in a protocol but they are felt with the heart.”

‘My future, my love’

He praised “the enthusiasm of Filipinos that is unfeigned.”

The Pope said he had not seen in his travels in other parts of the world such eagerness of parents to have their children blessed.

“There are so many children … As if the parents were saying this is my treasure, this is my future, this is my love,” Francis said. “That struck me. (They are saying) it is worth working hard, worth suffering. It is an original gesture borne of the heart.”

He added that he was particularly touched by parents bringing their disabled children with them. “They did not hide their children, they brought them to the Pope so he would bless them,” he said.

The Pope said the Filipinos “have joy, a capacity to celebrate.”

“It wasn’t a painted smile that just came,” he said, “(for) behind that smile there is normal life (with its share of) pains and problems.”

Asked what moved him most in the Philippines, Francis said that it would have to be the Mass in Tacloban City, where tens of thousands gathered to welcome him and celebrate Mass with him despite a coming storm.

Ironically enough, the Pope went to Tacloban to console the victims of Supertyphoon “Yolanda” (international name: Haiyan) in 2013, which killed thousands and displaced millions.

“To see the whole people of God firm, praying after this catastrophe, thinking about my sins and seeing the people, it was a very intense moment,” he said.

The Pope said he learned true resignation from the father of Kristel Padasas, a Church volunteer who died in Tacloban after a scaffolding was unhinged by howling winds and crashed on her.

The father had told the Pope that he was consoled knowing his daughter had died serving God.

“It is a word that is difficult for us to understand because it has been vulgarized too much,” the Pope said. “It has been used negatively, a word that has substance—resignation. A people that know how to suffer (are a) people that are capable of rising up.”

He did not respond directly to a question on what he felt breaking the record set by St. John Paul II in the 1995 Mass that closed the World Youth Day, which drew 5 million people.

He said what he learned from the Mass was that “Christians need the grace of crying” and they should pray for it like Moses “making water come out of the rock.”

Pointing to his meeting at the University of Santo Tomas, where he met with children rescued from the streets, the Pope said, “The poor evangelize us.”

“If we remove the poor from the Gospel, we will not understand the message of Jesus,” he added.

After two Asian tours, the Pope said he might go to Central Africa and Uganda toward the end of the year.

He said the trip might be “a little late because of Ebola”—referring to the epidemic that has been stalking the continent—but he said “there is a great responsibility” he should go there.

The Pope will also visit the United States this year, touring Philadelphia, Washington and New York.

He said he would like to go to California for the canonization of Franciscan friar Fr. Junipero Serra but “there is the problem of time.”

He said he might perform the canonization in Washington where the friar, who was a missionary in California, has a statue at the Capitol.

The Pope added that since he was entering the United States through Mexico, it might be remiss if he did not visit the Shrine of Our Lady of Guadalupe. “A war could break out,” he joked.

He said the Latin American countries that he might visit this year were Ecuador, Bolivia and Paraguay.

Later, the Holy Father met the 14 members of the Philippine media accredited to the papal trip in the business section of PAL.

The journalists had each a short chat and photo-opportunity with the Pope.

All journalists aboard were later given papal souvenirs—a papal Rosary, an especially made medal showing Our Lady of Madhu of Sri Lanka, and another medal showing the Santo Niño de Cebu of the Philippines.

The Pope said his apostolic visit was a success due to the “hard work” of the journalists.

What Pope Francis considers his ‘most moving moments’ in PH