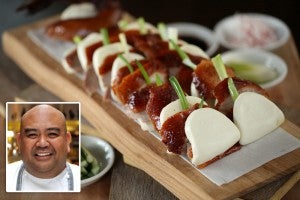 First posted in PositivelyFilipino.com (As Enter the Food Buddha)

LOS ANGELES — Catching up with Rodelio Aglibot would take a vehicle that’s fast like the Blue Flame and agile like Mars Rover Curiosity. He has opened more than 35 restaurants worldwide and has more in the works as the executive chef and partner at Intrestco Group in Mount Prospect, Illinois.

The bachelor calls his restaurants his “children,” some of whom have become household names in their respective cities, namely Koi in Los Angeles, E&O Asian Kitchen in San Francisco, BLT in New York City, Sunda in Chicago and Earth + Ocean (E+O) in nearby Mount Prospect.

His latest offspring, Yum Cha Dim Sum Parlor, which opened in March 2014, aims to resurrect Chinese fare in downtown Chicago.  The untraditional Chinese restaurant joins E+O under the ownership of Rod and his Intrestco Group partners. 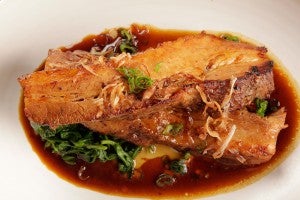 A true galloping gourmet, Rod has been on a long path of self-discovery throughout his life, like the inspiration for his nickname, Food Buddha. He was born in Subic Bay, grew up in Honolulu, studied environmental engineering at UCLA, completed culinary school at City of College of San Francisco and survived “culinary boot camp” at the Chef’s Apprenticeship Program at Green Brier Resort in West Virginia.

When I first met him after the opening of Koi ten years ago, his sushi crew was teaching him knife skills. He continues to search out new skills, though distancing himself from the ephemeral term “exotic” to describe his newfound knowledge.

“Having now worked in San Francisco, LA, New York, Seattle, Asia, Europe and Chicago, trends and interests have changed and been recycled over the years,” he explains.  “The exotic isn’t exotic anymore. It’s not so much ingredients, it’s technique that drives me, and like most chefs now, using sous vide and CVap® are interests I have incorporated over the last six years.”

E+O Food and Drink, in particular, complements Asian dishes with items from as far-off as Morocco, Italy and Argentina. The menu defies the usual dining categories of Chinese, Italian, American, among others. “Our dishes are still rooted in a California style, farm fresh sensibility. We are globally influenced, but locally cultivated.”

Referring to the Mount Prospect, Illinois, location of E+O, he adds, “The Midwest is a growing segment of food diners. They respect the creativity of chefs and look for things that are new and interesting. This type of menu would not work in all areas. The market will dictate how structured a menu needs to be.”

Rod’s menus are all over the Atlas, but there is a method to the head-spinning business that budding restaurateurs would be wise to heed. “The equation involves one of two possibilities,” he advises. “Option 1, you have a concept, and you look for the right location based on demographics, space and economics. Or Option 2, you find a location with the right demographic and economics, and you create a concept that creates the need or fulfills the need.” 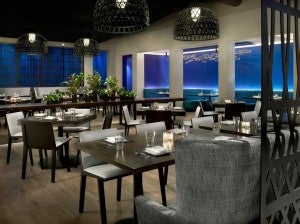 Elaborating on the influence the neighborhood has on a menu, Rod explains, “Local diners’ food education or, how well they understand the style of food, influences the menu as well as economics and market. For example, if you were in a business district, the lunch menu needs to be fast and consistent. Eating habits, such as portion size and alcohol drinking, also play into developing a menu, as well as the talent pool of cooks you will be hiring from.”

Experience has made opening a restaurant easier each time, but not because he can anticipate all the pitfalls. “While I know the gist of how an opening is going to happen with certain structured steps, I have become more flexible in allowing the restaurant’s personality to take shape and in making adjustments beyond the physical structure of the restaurant.”

Rodelio ranks San Francisco as having the most “food educated” diners and New York City as his favorite city for eating.  He ranks the following cities on his list of bests:

None of his siblings — Rosie, Lynn, Arlene and Ruby —  followed their father, retired Navy cook, Reginald, and mother, Celestina, into the restaurant business. The death of his younger brother, Reginald Jr., hastened Rod toward making a full commitment to cooking, a love he began courting 30 years ago in a McDonald’s kitchen. Of his late brother, Rod says, “His life taught me the value of love, time and choice. I don’t like to waste time. I consistently choose happiness.”

In choosing cooking over engineering, Rod put art ahead of practical ambitions.  His Filipino culture had much to do with the choice.

“I believe as Filipinos, we have an innate sense of ingenuity and creativity. We express ourselves through the arts and have a deeply rooted respect for culture and tradition. I wouldn’t say we are easily willing to abandon safe careers because of our responsible nature with our families and the pride of our parents.  However, our passion and affinity to love at some point gives us the courage to follow our hearts and be creative.”

“Rod’s menus are all over the Atlas, but there is a method to the head-spinning business that budding restaurateurs would be wise to heed.”

Last March, Yum Cha became only the sixth restaurant to serve business diners and the estimated 12,000 residents in the Lakeshore East section of Chicago. A strong focus on customer service separates the upscale restaurant from the commonplace Chinese restaurant. A friendly, clean atmosphere with cheerful music is a refreshing break for Americans who normally accept icky bathrooms, décor consisting of cuffed lobsters in tanks, and blunt waiters as part of the bargain to obtain chicken chow mein and broccoli beef.

“I have already heard from Chinese professionals who tell me they can bring customers to the restaurant and know they will enjoy it,” Rod speaks as an observer who spends over 80 percent of his workday at Yum Cha.

In the first month, Yum Cha averaged between 100 and 150 guests at lunch and the same range for dinner. This summer, dining capacity will expand to 200 seats with the addition of a patio. 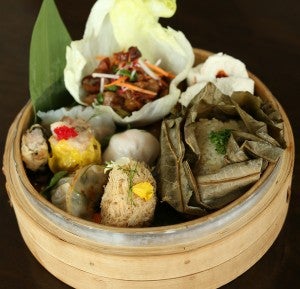 Yum Cha represents one of two concepts governing future restaurants in the Intrestco fold. E+O is the other concept defined by a downtown menu in a suburban location (Mount Prospect) with multiple elements that can spin-off into E+O Burger, E+O Sushi and other specialties. Chicagoans should patrol the frozen food aisles for the debut of E+O and Yum Cha Dim Sum Parlor dishes reinterpreted under the Food Buddha Gourmet label.

Rod graduated from culinary school 19 years ago and was “anointed” in 2004 with an invitation to cook at the Beard House of the James Beard Foundation. But he only started calling himself “Chef” in the last nine years.

“There is no standardized test, no practical exam, no certificate, no swearing in, no body that governs the title of ‘Chef’,” Rod explains. “It’s only the most important person who can give you that title, and he’s the only one who knows you’ve earned it.  That person is your soul, your integrity, your honest reflection of all parts of you. Trust me, you will know you have earned it because you will have peace.”

Despite the many successes and commitments Rod, at age 46, is ready to clear space in his schedule to start a Filipino chef association to do more than preserve the place of Filipino food in the cultural identity of young chefs.

“When Typhoon Haiyan struck last year, Filipino chefs wanted to hold a national fundraiser for the victims, but it didn’t happen because there wasn’t an organization to respond immediately,” Rod laments. “The typhoon called attention to the need to form an organization to enable us to work together following a disaster.”

Rodelio Aglibot is proving to be a chef who is dedicated to pleasing more than just appetites.

Yum Cha Dim Sum Parlor is located at 333 East Randolph Street in Chicago (60601) and is open from 11 AM to 10 PM, Sunday through Thursday, and 11 AM to 11 PM, Friday and Saturday. Reservations may be made by phone at 312–946–8885 or on the YumChaChicago.com website. Rod urges Positively Filipino readers to ask for him at the front. Nothing this side of Paris impresses a first date more than a personal hello from the chef.