Filipino students win at Intel science fair in US 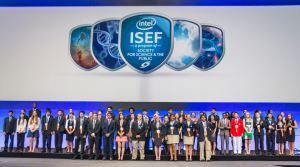 Some of the winners at the ISEF Science Fair in Pittsburgh, Pennsylvania. FACEBOOK PHOTO

SAN FRANCISCO — A team of Filipino students bagged a $1,500 prize in Biomedical and Health research this year at the Intel Science and Engineering Fair (ISEF) where more than a thousand students gather every year to compete for more than $5 million in awards and prizes.

The team of Kenneth Michael Angelo Natividad Antonio, 14, Marian Romero Cabuntocan, 16, and Thea Marie Laquinta Tinaja, 15, won third place in their category for their study of “the potential of extracts from the integuments of the diamond back squid, a species that abounds in the locality, as source of neuroprotective and anti-stroke agents without causing adverse side effects on cardiac activity.”

Antonio will be in Grade 9 and Cabuntocan and Tinaja in Grade 10 this coming school year under the K-12 program.

The Filipinos were among 600 of the participating students in Pittsburgh, Pennsylvania last May 10,who received awards and prizes for their innovative research, including 20 “Best of Category” winners, who each received a US$5,000 prize. The annual ISEF is a project of the Society for Science & the Public.

Approximately 1,700 young scientists from 422 affiliate fairs in more than 75 countries, regions and territories were selected to participate in the fair this year.

The top prize, the Gordon E. Moore award of US$75,000 went to 17-year-old Raymond Wang of Canada for his mechanical engineering project – a new air inlet system for airplane cabins, which improves the availability of fresh air in the cabin while reducing pathogen inhalation concentrations.

Two runner-ups each received the Intel Foundation Young Scientist Award of US$50,000. Nicole Ticea, 17, also of Canada, was awarded for developing an inexpensive, disposable, easy-to-use testing device to combat the high rate of undiagnosed HIV infections in low-income communities. Karan Jerath, 18, of Friendswood, Texas, got the award for refining and testing a novel device that should allow an undersea oil well to rapidly and safely recover following a blowout.

All 21 on board scramble to safety after Texas plane crash