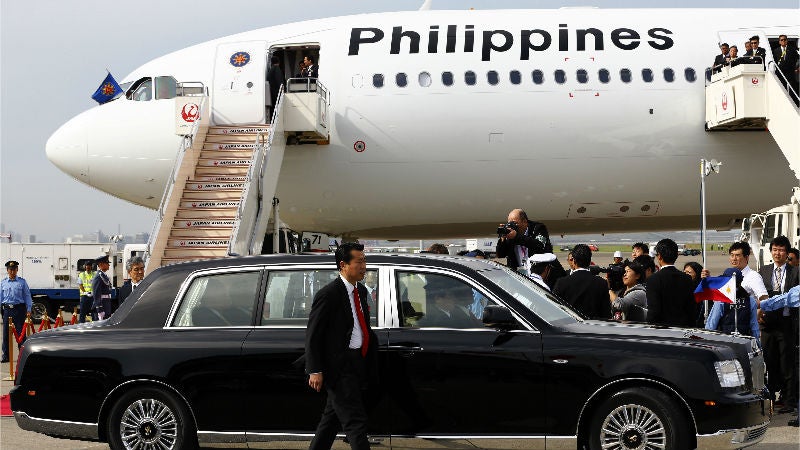 AIRPORT LIMOUSINE President Aquino takes the official car upon arrival at Tokyo’s Haneda International Airport on Tuesday for the start of his four-day state visit in Japan. AP

TOKYO—Top Japanese businessmen expressed interest in boosting investments in the Philippines as President Aquino flew in for economic talks and to seek Tokyo’s support against Beijing’s widening reach in the disputed South China Sea.

Aquino arrived on Tuesday aboard a chartered Philippine Airlines (PAL) plane for a four-day visit as the first foreign leader invited to make a state visit to Japan this year.

The President is scheduled to speak in the Japanese Diet (Parliament) on Wednesday, where he is expected to focus on China’s construction of runways and other infrastructure on reclaimed islands, aggravating regional tensions and drawing demands from Washington for Beijing to stop.

Aquino’s visit came less than a month after the Philippines and Japan held their first joint military drill in modern history—despite the Japanese role as occupier of much of Asia during World War II.

But politics will top the agenda.

Beijing has ramped up its land reclamation in the South China Sea at a dramatic pace, constructing man-made islands on top of reefs across a wide area to back up its territorial claims.

China insists it has a right to control nearly all of the South China Sea, including waters near the coasts of the Philippines, Vietnam and other Asian neighbors with competing claims to the area.

After meetings between Aquino and the Japanese businessmen, Communications Secretary Herminio Coloma said in notes sent to the media that Japanese beverage firm Kirin had “expressed great interest in expanding their investments on the Philippines.”

Senji Miyake, chair of Kirin Holdings Co. Ltd., also said his firm was “highly satisfied with the investment and business climate in the Philippines.”

Trading house Marubeni, which has been doing business in the Philippines for more than a century, is “upbeat” about its investments in the country.

These include stakes in the power and energy development sectors, mass transportation projects such as the Metro Rail Transit 7 and the Light Rail Transit 2 extension, and the water sector.

Marubeni chair Teruo Asada said his conglomerate was also looking into new forays in the Philippines, including commercial vehicles.

Fast Retailing Co. Ltd., owner of apparel giant Uniqlo, expressed satisfaction over the brand’s expansion into the Philippines, where it has gained traction among consumers.

Uniqlo currently has 23 stores in the Philippines and is planning to open 200 other stores in the country, Filipino officials say.

“President Aquino pointed out the primacy of investments in people development in terms of national budget priorities,” Coloma said. “He spoke of the demographic sweet spot: majority of the population are in working age and earning higher income.”

Aquino landed in Japan in temperate weather, hoping to bring in even sunnier times to the country’s relations with its leading Asian ally, particularly in the areas of security and business.

He left Manila with a promise to “bring home a lot of good news.”

Officials from the Japanese foreign ministry and the Imperial Household Agency led the arrival ceremonies.

The President’s delegation included his top trade and economic officials.

Inviting more Japanese investments is on top of the President’s mission, with business meetings making up much of his schedule.

Aquino witnessed the signing of a memorandum of understanding on business promotion cooperation between officials of the Department of Trade and Industry, and the Japan External Trade Organization.

This was due to increased Philippine exports of nickel-based products, glycerol and integrated circuits.

The President’s scheduled investment forum with Japanese businessmen is aimed at stirring business prospects from Asia’s leading economy, with its inward investments into Manila declining over the last three years.

On Tuesday night, Aquino met with members of the Filipino community, including Philippine Military Academy cadets training at the National Defense Academy of Japan, and nurses and caregivers working in Japan under the Japan-Philippines Economic Partnership Agreement.

There are 222,576 Filipinos in Japan, 2.24 percent of whom are irregular migrants. Three-fourths of Filipinos registered in Japan are women with Japanese and foreign spouses, making up the largest number of Philippine residents here.

The other Filipinos are professionals and creative service and skilled workers.

On Thursday afternoon, Aquino will meet with Abe at the historic Akasaka Palace.

Philippine Ambassador to Japan Manuel Lopez said the meeting would focus on the disputed South China Sea and other bilateral issues.

“Surely, first and foremost will be the South China Sea issue because that is something that is quite sensitive to both Japan and the Philippines,” Lopez said in an interview with Radio TV Malacañang.

Both sides have many times expressed concern over the aggressive Chinese military buildup in the disputed Asia-Pacific waters, with Manila claiming parts of the South China Sea and Japan the East China Sea.

Abe, who visited the Philippines in 2013, has been pushing for the rearming of Japan in the midst of growing security threats in the region.

Lopez said the President was expected to convey his gratitude for Japan’s assistance in the wake of Supertyphoon “Yolanda” (international name: Haiyan) in 2013. Tokyo was one of the biggest donors during relief operations following the supertyphoon.

During his visit, Aquino is to receive Japan’s highest honor, the Grand Cordon of the Supreme Order of the Chrysanthemum. The award was previously accorded to then President Gloria Macapagal-Arroyo and members of Britain’s royal family, including Queen Elizabeth II, Prince Philip, Prince Charles and Prince William.

In return, Aquino is expected to bestow Japanese officials with corresponding Philippine honors.

In his predeparture speech in Manila, Aquino said: “The Philippines is ready to help in resolving challenges that the Asian region is facing and will face. We are contributing to the achievement of our collective goal.”

“This can be attributed to the changing system and culture of trade under this administration’s good governance,” he said.

In Tokyo, Aquino will participate in the Nikkei 21st International Conference on the Future of Asia through which, he said, the Philippines could showcase its capability in contributing to the Southeast Asian integration.

Executive Secretary Paquito Ochoa said in a statement that a total of P34.6 million had been budgeted for the President’s visit to Tokyo.

“The amount covers expenses for transportation, accommodation, food, equipment and other requirements of the Chief Executive and his 60-member delegation,” Ochoa said.–With reports from Jeannette I. Andrade and Nikko Dizon