President Aquino flies to Japan Tuesday for a four-day state visit to strengthen political, trade and business relations with the Philippines’ leading Asian ally, as the two countries mark 60 years of official ties.

Aquino will meet with Japanese Prime Minister Shinzo Abe and the two leaders are expected to have a wide-ranging discussion, including mutual concerns over the South China Sea dispute.

Both sides have expressed concern over threats to freedom of navigation in the Asia-Pacific due to China’s military buildup in disputed waters.

Aquino and a number of key officials are scheduled to leave for Tokyo at 10:30 a.m. aboard chartered Philippine Airlines flight PR-001. 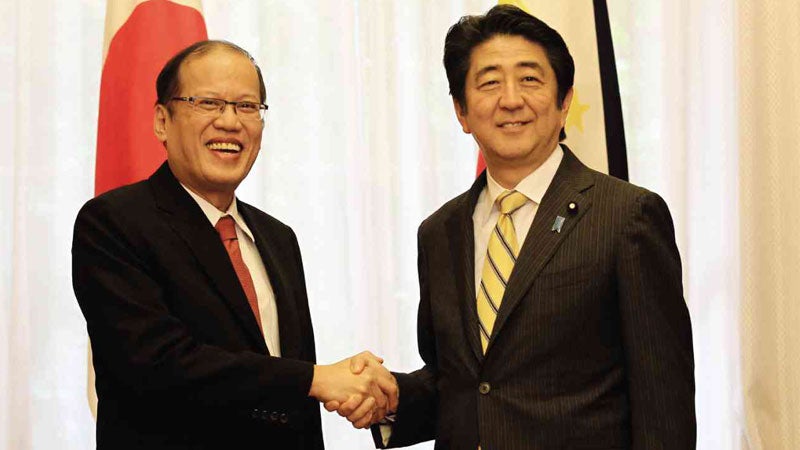 The trip would be Aquino’s first state visit to Japan, but he has traveled to the country five times during his presidency on official visits.

Upon arrival in Tokyo Tuesday afternoon, the President will take part in business meetings before calling it a night.

On Wednesday, members of the Japanese imperial family, led by Emperor Akihito and Empress Michiko, will officially welcome Aquino.

The President will then deliver a keynote speech at the Nikkei 21st International Conference on the Future of Asia, a key Asia-Pacific forum that annually gathers together the region’s political and economic leaders.

On the afternoon of the second day, he will make his first address to the National Diet, the Japanese Parliament, where he is expected to talk about developments in the Philippines under his administration.

It is a special opportunity for a visiting foreign head of state to address the Parliament, as not all leaders invited on a state visit are accorded such an honor, said Minda Calaguian-Cruz, Department of Foreign Affairs Assistant Secretary for Asia and the Pacific, in an earlier briefing.

Aquino would be the third Philippine President in recent memory to address the National Diet. His mother, the late President Corazon Aquino, addressed the Parliament during a state visit in November 1986, while former President Gloria Macapagal-Arroyo also addressed a joint session in December 2002.

In the evening, Aquino will return to the Imperial Palace for a state banquet in his honor.

On Day 3, the President is scheduled to take part in a series of business meetings and an investment forum where he is expected to woo Japanese investors.

Slated during the investment forum are discussions on two major sectors: infrastructure and electronics.

He is also scheduled to witness the contract signing for the turnover of 10 patrol boats to the Philippine Coast Guard.

The pact is to be signed by the Department of Transportation and Communications and Japan Marine United Corp. for the Maritime Safety Capability Improvement Project.

Philippine Ambassador to Japan Manuel Lopez said in an interview with Radio TV Malacañang on Sunday that the patrol boats, to be turned over as part of Japan’s assistance to the Philippines, will be used to enhance the monitoring of the country’s coastline.

On his final day, Aquino will pay a farewell call on the Imperial family before capping his visit with a meeting with the Japan National Press Club.