Whose Land? Whose Development? 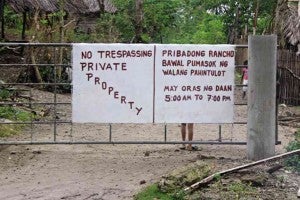 A number of our kababayans abroad have invested in real estate, mainly condos and houses, in the Philippines. It is easy enough to understand and respect their need for financial security and a home. But perhaps it is time to tell some of the stories behind the towering buildings in Metro Manila and now, in places like Sta. Rosa, Laguna, and Porac, Pampanga. This is one story.

Just a decade ago there were two peaceful and quiet barangays in the town of Porac, Pampanga. One was Hacienda Dolores with a population of 1,500 people, mostly farmers who made a living from their rice, sugarcane, fruit trees, vegetables. In 1993, the farmers asked DAR to implement land reform in Hacienda Dolores, as provided for by the Comprehensive Agrarian Reform Program (CARP).

The other barangay is Sapang Uwak. The Ayta who live there grow giant squash and camote weighing up to five kilos, red mountain rice, native corn, bananas and many other vegetables and fruit. The land is still so rich, they say, that there is no need for inputs. Streams are pristine and wild pigs roam the slopes of Pinatubo. Sapang Uwak is part of the ancestral domain of the Pinatubo Ayta, who were awarded a certificate of ancestral domain title or CADT, covering 18,000 hectares around the mountain, and extending from Pampanga to Tarlac and Zambales.

In 2005 two developments created great opportunities for real estate developers, including the biggest in the country, Ayala Land Incorporated, with almost $10 billion capitalization as of April 2014. First, the construction of SCTEX cut commute time from Manila to Porac to only an hour and connected the area to NLEX and hence to Subic. Second, tourists in increasing numbers were drawn to the now accessible beauty of the Mt. Pinatubo, including its blue-green crater lake, myriad rainfalls, trails for hikers and bikers, and flora and fauna.

More than 700 hectares of farmland in Hacienda Dolores were owned by FL Properties and Management Corporation and LLL Holdings. Although the farmers had already requested for coverage under CARP as early as 1993, the DAR in 2005 issued an order exempting the contested area from land reform, without any consultation with, or notice to, the actual farmer-occupants. 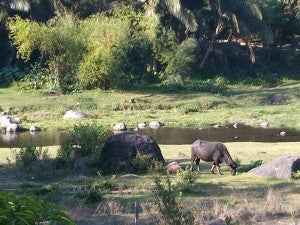 Hacienda Dolores has many attractive features. 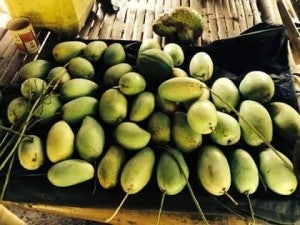 Hacienda Dolores has been productive for 162 years, with farmers growing fruit trees, rice and sugarcane

Former DAR Regional Director Narciso Nieto granted the exemption based on the assertion that the 18 percent slope of the land made it unsuitable for farming. The decision seems somewhat ridiculous, considering that Hacienda Dolores has been under cultivation for 162 years.

Farmers explained that only a very small portion of the land was elevated but even this was productive, with fruit-bearing trees and other crops. DAR at one point announced an ocular inspection but upon receiving a letter from the developers, this was canceled due to “security” reasons.

The DAR decision was extremely favorable to FL-LLL since they would be at liberty to dispose of the land to their maximum advantage. They could exercise complete control over the use and price of the land, while the farmers would be denied access and ownership of the more than 700-hectare estate.

At the same time FL-LLL claimed that they owned 200 hectares of Barangay Sapang Uwak, although this is covered by the certificate of ancestral domain title issued by the NIPC or National Indigenous Peoples Commission.

When the Aetas approached the NIPC to stop harassment by the FL-LLL groups, they learned that there are 98 private claims (consolidated now to 25) inside the ancestral domain and that the DAR and DENR still have to clarify the status of these private claims.

It was in 2005 when the corporations began the process of taking complete control over the land and preventing access by the Ayta and non-Ayta farmers. At first they fenced the area and regulated entry, but the farmers were still allowed to work their land and harvest their crops. The Ayta were also allowed to pass through Hacienda Dolores on their way outside.

In 2010 the conflict escalated when surveyors forced their way into the farms. Complaints to the barangay were ignored, and the Dolores farmers were banned from entering the area. In their absence, their crops and trees were destroyed, their livestock lost and stolen, and their homes demolished. The people of Sapang Uwak could no longer pass through the Dolores road, making it hard for them to access the outside world.

It was then that the farmers decided to form the organization Aniban ng Nagkakaisang Mamamayan ng Hacienda Dolores, or ANIBAN, through the help of Kilusan Para sa Repormang Agraryo at Katarungang Panlipunan (KATARUNGAN), a nationwide organization of peasants.

In 2011, the corporations conducted clearing operations, using bulldozers and earth-moving equipment. Since the said year, physical harassment and criminalization of land rights claimant were raised to a new level of impunity.

In 2012, the DAR issued a partial revocation of the exemption order that it issued in 2005. But the revocation of exemption only covered 82 hectares. ANIBAN rejected the order on the ground that the entire estate is productive with actual occupant-farmers.

The DAR however, has been excruciatingly slow in protecting the rights of farmers. The demand for the issuance of a cease and desist order and the need for ocular inspection to validate the situation on the ground and thereby protect the farmers right to till the land remain a promise since 2012. 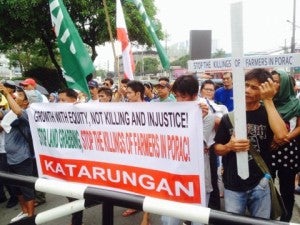 The situation reached a boiling point in 2014. Aniban leader Arman Padino was shot in the head and killed in January, when security guards fired their guns at the farmers trying to return to their homes and farms. Another leader, Melon Barcia, was ambushed by two teams of motorcycle riding gunmen in May. He died instantly but his wife, though shot, survived.

Aniban’s chairman and Dolores barangay captain Apung Tony Tolentino was charged with kidnapping and carnapping when he intervened in the January incident. He has been detained in Angeles City Jail for over a year, worried about the security of his family and developments in the barangays.

Five months after Melon Barcia was ambushed and killed, Ayala Land announced the launching of Alviera, a 1,125-hectare integrated, mixed use “township” in partnership with Leonio Land (FL and LLL). According to Ayala the township will include a Forbes Park clone, three residential communities for young and affluent families, two private colleges, a country club, an industrial park, specialty restaurants, and commercial and recreational centers.

No place for ordinary folks

It would be a tragedy if these self-reliant and productive farmers and their families would be reduced to working in the industrial park, where, as in other industrial parks, they would be overworked, underpaid, perpetually casual and kicked out if they dare organize.

It would be a shame if the Ayta became tourist guides in their ancestral domain, which they should manage to their benefit. It would be the world’s loss if their system of sustainable farming died out completely, to be replaced with destructive agribusiness.

Violeta DeGuzman is a volunteer at KATARUNGAN.