LOS ANGELES – A Filipino American law firm sued the promoter, trainer and manager of Manny Pacquiao for allegedly perpetrating fraud in the so-called “Fight of the Century” between Pacquiao and Floyd Mayweather, becoming just one of several lawsuits filed after May 2 the fight in Las Vegas.

Some 32 lawsuits are now pending in different U.S. Courts, all based on the non-disclosure of Pacquiao’s right shoulder rotator cuff injury, which was sustained during his pre-fight training.

However, clients of the Filipino Law Group, which filed class action suit No. BC581363 in the Superior Court of California for the County of Los Angeles-Central District on May 11, did not name Pacquiao himself as a defendant.

Instead, the complaint was lodged only against Top Rank, Inc., Bob Arum, Michael Koncz and Freddie Roach.

Unlike other litigants, FLG decided not to sue Pacquiao because it believes that boxer’s management and promotion team were ultimately responsible and made the executive decision not to disclose his injury. 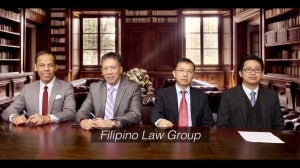 “We believe that Manny Pacquiao’s interests differ than those of his management and promotion team,” stated Atty. Ed Lopez.

Not only did Top Rank, Inc., Bob Arum, Michael Koncz and Freddie Roach intentionally conceal Pacquaio’s injury, they misrepresented that Pacquiao was 100 percent physically fit to knock out Floyd Mayweather. The complaint alleges.

The attempt to conceal Pacquiao’s injury is evidenced by Michael Koncz’ overt act of indicating to the Nevada State Athletic Commission on a pre-fight questionnaire that he filled out and answered for Manny Pacquiao, the suit alleges further.

“This lawsuit is not only for Manny Pacquiao, Floyd Mayweather, or Filipinos. We have filed this lawsuit on behalf of boxing fans and enthusiasts all over the world who believe that they have been misled and to preserve the integrity of the sports of boxing,” added Atty. Marlon Baldomero.

Filipino Law Group is headquartered in Los Angeles, California. Information on joining this lawsuit can be found on the Filipino Law Group’s Facebook page by clicking on the link displayed or calling 1.855.MABUHAY (1.855.6228429). Inquiries can also be emailed to: [email protected] .

Read Next
Fil-Am bound for US nabbed at NAIA for carrying knife, grenade in backpack
EDITORS' PICK
Nograles: Cabinet members to donate 75% of monthly salary to aid COVID-19 fight
Quick chat with Nicole Andersson: ‘You really don’t need much to be happy’
IATF to LGUs: Issue ordinances vs attacks on frontliners, COVID-19 patients
Diokno to Duterte: OK to make fun of buck tooth, but focus on people’s needs first
Robredo spox thanks Duterte for defending VP’s efforts vs COVID-19
10 Filipinos positive for COVID-19 in UK, 7 in Ireland — envoy
MOST READ
Gov’t mulling quarantine period extension of 15-20 more days
Sotto on Isko Moreno’s call: We do our job without the media following our every move
ADB warns PH against prolonged lockdown
Duterte fires PACC’s Luna for urging NBI to probe Robredo
Don't miss out on the latest news and information.