Rohingyas ‘unlikely’ to make it to PH, but... | Global News
Close
menu
search

Rohingyas ‘unlikely’ to make it to PH, but… 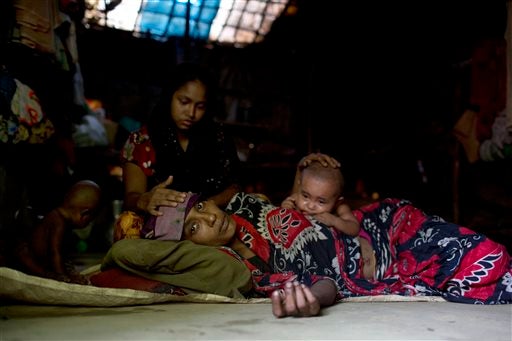 In this May 21, 2015, photo, Musammat Shahida, top, a Rohingya from Myanmar, takes care of her sister Musammat Somuda suffering from fever at a camp for Rohingya people in Ukhiya, near Cox’s Bazar, a southern coastal district about 296 kilometers south of Dhaka, Bangladesh. AP PHOTO/A.M. AHAD

MANILA, Philippines–The possibility of the Rohingyas heading to Philippine shores is remote but the government could offer the same help that it did when it allowed the transit of some Rohingya refugees here last year, a United Nations official said.

According to Bernard Kerblat, the country representative of UN High Commissioner for Refugees (UNHCR), nine Rohingyas had sought temporary refuge in the Philippines before heading to their final resettlement destination.

“It was the Philippines that raised its hand and allowed the transit of the Rohingyas so that they would be extracted from a very, very dangerous situation,” Kerblat told a press briefing on Wednesday.

This happened in 2014 when the UNHCR and the International Organization for Migration were seeking to save a group of refugees who were about to be trafficked and sold.

While the two organizations were trying to work out the Rohingyas’ resettlement, at least nine of the refugees found hospitality in the country where they were able to “regain their health and dignity,” said Kerblat.

He said that of all the nations in the region, the Philippines was the first to offer help.

“They were allowed to transit here in the Philippines first to recover, to get the basics, such as food and water, and to be eventually freed from fear that they would be sold again,” he said.

Kerblat said it is unlikely that the Rohingyas who are now adrift in the Andaman Sea would find their way here.

Thousands of members of the Rohingya minority fleeing persecution by radical Buddhists in Burma, after escaping poverty in Bangladesh, are stranded at sea without food or water after they were abandoned by their human traffickers.

Nearly 3,000 have swum to shore and been rescued off Indonesia, Malaysia and Thailand.

The UNHCR has appealed to Southeast Asian governments to make a collective response to the crisis.

Afterwards, pledges of aid from other nations and the Philippines’ neighbors poured in for the stranded Rohingyas. After the Philippines offered to take in the refugees, Malaysia, Indonesia and Thailand, which previously turned the boat people away, have agreed to provide them temporary shelter.

A 19-nation meeting will convene in Bangkok, Thailand, on Friday to come up with a solution to the worsening Rohingya crisis.

“Additional search and rescue resources are needed to support what is already under way,” Kerblat said, noting that Thailand, Burma, the United States and Turkey have pledged to send their Navy assets to

The Rohingyas, reportedly one of the most persecuted minorities in the world, are fleeing violence against them in Buddhist-majority Burma.