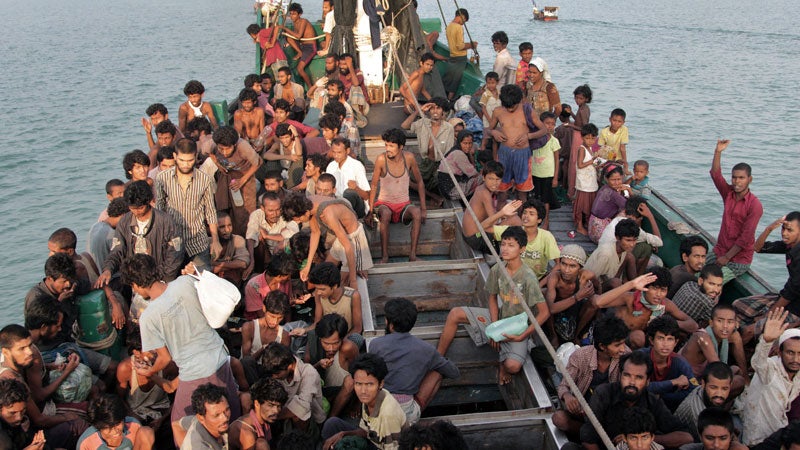 Migrants wait to be be rescued by Acehnese fishermen on their boat on the sea off East Aceh, Indonesia, Wednesday, May 20, 2015. In a potential breakthrough in Southeast Asia’s humanitarian crisis, Indonesia and Malaysia offered Wednesday to provide temporary shelter to thousands of migrants stranded at sea after weeks of saying they weren’t welcome. But they appealed for international help, saying the crisis was a global, not a regional, problem. (AP Photo/S. Yulinnas)

“These people have seen too much violence and hostility. They deserve, more than ever, our sympathy and kindness,” Hataman said in a statement emailed to the Inquirer.

READ: Fishermen wept as they rescued starving migrants off Indonesia

He said the Rohingyas had suffered too much and it was only proper to at least ease their ordeal.

“This is why we of the regional government, as we reiterate our support and solidarity with them, our Rohingya brothers and sisters, express our willingness to host them in the ARMM,” Hataman said.

He said the ARMM was not wealthy and that it also experiences migration due to many factors but these should not deter it from taking in the Rohingyas on humanitarian grounds.

“We believe that even with the current conditions on the ground, even with our own experience of migration and internal displacement, there is always room enough for us to show our hospitality and care for them,” Hataman added.

Several ARMM provinces, including Tawi-Tawi, share border with such countries as Indonesia and Malaysia, where Rohingyas fleeing on boats had sought refuge.

Reports had it that many of them died at sea as authorities in the said countries turned them away.

“As they are trapped at sea and are desperate for help, their sufferings exacerbated by the refusal of other countries to welcome them and provide them with refuge, we must offer them a glimmer of hope for a bright future and a peaceful life,” Hataman said.

He said the ARMM government could not deprive the Rohingyas of sanctuary, especially so that many of its people also experienced similar fate.

“This displacement also touches a sensitive chord in the life and history of Mindanao Muslims, who suffered harrowing episodes of evacuations because of violence,” he said.

“The Halaws had to flee in the midst of fear and uncertainty, back to the Philippines,” he said.

He said as Muslims, the people of the ARMM were also concerned that women and children face a perilous journey to freedom, “only to find an ocean of uncertainty and crushing indifference from the world outside Burma.”

Hataman said the offer to host the Rohingyas was in line with the Aquino government’s “willingness to provide for the welfare of the Rohingya people.”

Malacañang had said it was willing to help the boat people fleeing Myanmar’s Rakhine region and the national government remains in solidarity with the United Nations (UN) to help address their plight.

Malacañang said as a signatory to the 1951 UN Convention Relating to the Status of Refugees, the Philippines has the moral obligation to assist and provide relief to persons involuntarily displaced from their homelands as a consequence of political conflict.

“We shall continue to do our share in saving lives under existing and long-standing mechanisms pursuant to our commitments under the Convention,” Communications Secretary Herminio Coloma Jr. said.

“This is proof of our country’s readiness to respond to a humanitarian crisis in as humane manner as possible,” Hataman said.