Apec delegates whoop it up in Boracay beach party 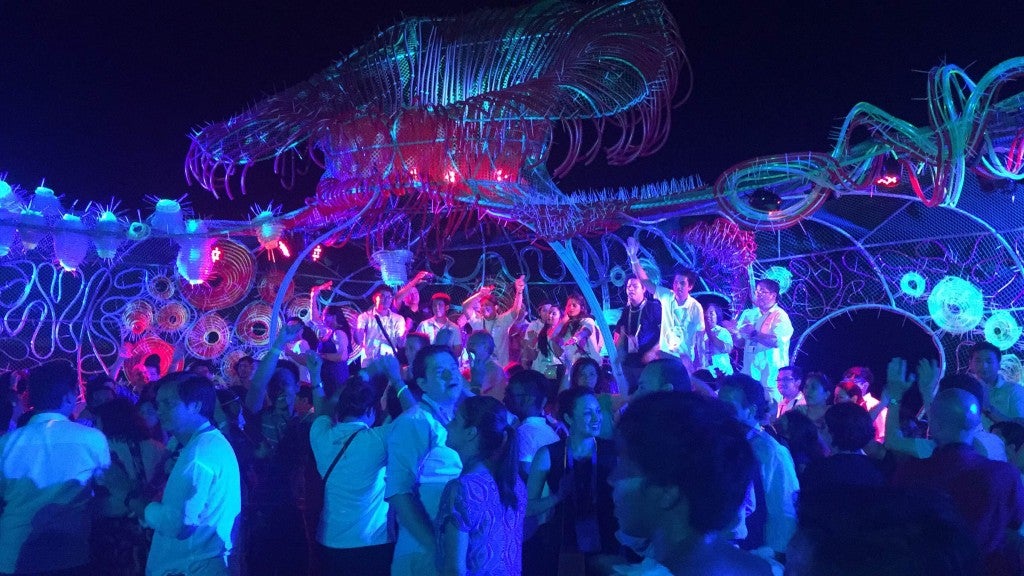 A colorful stage depicting an upside down jelly fish served as the dance floor for frenzied delegates for APEC summit in Boracay.

BORACAY ISLAND, Philippines—Business leaders and diplomats from countries along the Pacific Rim took a break from their serious discussions and let it all hang out at the beach party hosted by the Philippines, Boracay style.

In contrast to the cultural shows that the Philippines had been organizing for a series of Asia Pacific Economic Cooperation (Apec) meetings that began last December, its Wednesday night welcome dinner surprised most of the delegates, who came in their most casual attire.

Upbeat party music, songs and fire dances rocked the beachfront of Boracay’s Pearl of the Pacific Resort to the delight of the initially reserved guests composed of senior officials, business leaders and experts from the 21 member economies of Apec.

At least 1,500 delegates had come to Boracay to attend the series of technical working group meetings as well as a two-day senior officials’ meeting, which ended on Thursday.

Trade officials in the Asia-Pacific were to start arriving Friday for the separate Ministers Responsible for Trade Meeting to be held on May 23 to 24.

Deputy presidential spokesperson Abigail Valte, who was at the party, noted that the Apec organizers had wanted the reception dinner for the delegates to be “young, hip and modern.”

After the dinner, where the best cuisines on the island were served, the delegates got the feel of the raucous parties Boracay has been known for.

Singer Bituin Escalante, the main performer of the night, belted out disco classics of the 1980s, followed by a stunning performance of the Boracay fire dancers on a stage gleaming with neon lights.

A dance flash mob ensued, with the dancers leaving the stage to dance with the Apec delegates.

Even diplomats like Robert Wang, a senior official of the US Department of State for Apec, was spotted dancing with the crowd.

Filipino officials, such as Valte and Assistant Secretary Charles Jose, spokesman of the Department of Foreign Affairs, joined the fray and danced away on Wednesday night.

“It was a surprise,” Valte quipped, noting that the Apec officials were used to formal dinner receptions and cultural shows.

Boracay, touted as Asia’s leading beach destination, is hosting the Apec meetings for the first time.

The Philippines chose the paradise island as one of the venues of the Apec meetings to boost the country’s tourism industry, which had brought in revenues amounting to P27 billion as of 2014.

The Boracay talks are part of a series of Apec meetings culminating in the Apec economic leaders’ summit to be held in Manila in November.