Despite delay in US immigration relief, rights advocates ‘not giving up’ | Global News
Close
menu
search

Despite delay in US immigration relief, rights advocates ‘not giving up’ 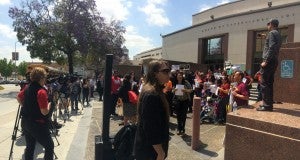 LOS ANGELES – Supporters of President Barack Obama’s executive order on immigration and relief programs Deferred Action for Parent of Americans (DAPA) and Deferred Action for Childhood Arrivals (DACA) held a rally and briefing here on May 19, the day the programs were supposed to come into full effect.

“[But] as many of you know, one of the things stopping these programs from going into place is the court order from the Southern District of Texas — in December 2014, Texas and other states filed a lawsuit, Texas v. The United States, in order to stop the immigration initiative stated Sally Kinoshita, Deputy Director of Immigrant Legal Resource Center (ILRC).

Further, on February 16, 2015, Federal District court in the Southern District of Texas, issued a preliminary injunction, explained Alvaro Huerta, staff attorney at the National Immigration Law Center (NILC). “While this injunction is in place millions of immigrant families will remain in limbo,” Huerta added.

The temporary immigration relief programs offer the opportunity to be safely protected from deportation and the legal ability to work in the United States, apply for a Social Security number, open up a bank account, travel within the country, get a California driver’s license and gain access to some public health care.

Advocates specified the use of legal resources, support and training to ensure that the “maximum number” of Californians can prepare and benefit from the programs.

“We continue to stay on top of the news and continue to be prepared and that is as much as I can do at this time,” stated undocumented immigrant and father of five American citizen children, Salvador Huerta.

“Immigration is the air ethnic media breathes – we’ll do whatever we can to spread news and give voice to key players, people who can update us on what the status on the Executive Action is,” stated New America Media Executive Director Sandy Close.

Isabel Medina, an undocumented factory worker with two US citizen children who has been working and paying taxes in the United States for the past 17 years, is among the thousands of immigrants who are in limbo.

“[The authorities] have to acknowledge that we are people who contribute to this great nation,” Medina said. “They have to know that they are not just hurting our families by separating us, but also they are hurting America because we contribute. As you may not know, American citizens who pay their taxes get their money in return, but we don’t. It is so unfair.”

More than a million eligible

More than 1.5 million people would be eligible for DAPA or DACA. Potentially eligible individuals would need to show proof of identification and that they were here during the date of the Executive Action announcement, November 20, 2014 and that they have been in the United States since January 1, 2010.

Examples of proof of identification during those dates include, but are not limited to, remittance receipts, medical or immunization records, church memberships or payment receipts — anything that shows they were present in the United States during the appropriate time period.

The cost to apply to the program is estimated to be around $465, plus the cost of any possible legal assistance.

“We call on state leaders to drop the lawsuit challenging DAPA and expanded DACA, to act with compassion and recognize the countless and invaluable contributions and sacrifices undocumented immigrants and families have given to advance the development of this country,” said Filipino Migrant Center Executive Director Joanna Concepcion in a statement supporting President Obama’s Immigration Relief Initiatives.

Despite the delay, Kinoshita declared, “We are continuing to prepare our state for a program that we believe will be implemented and we encourage the immigrant community to do the same.” 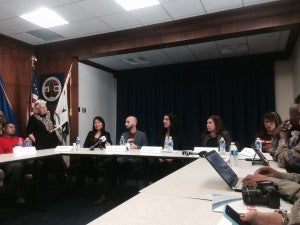 “I know that there are various workshops and community events that have been happening over the last year,” said Aman Thind, Immigration Project director of Asian Americans Advancing Justice-Los Angeles (AAAJ-LA).

Immigrants can come out of the shadows, still apply for relief from deportation and hear the benefits, Thind said. “This is empowering, you can go work and would need to be treated fair in the workplace.”

Many Asian immigrants, including Filipinos, are eligible but haven’t applied yet. “We think that’s due to a number of reasons such as the fees, misinformation, thinking that they do not qualify and the stigma in many Asian immigrant families about being undocumented,” added Thind, who stated many still qualify for the initial DACA program.