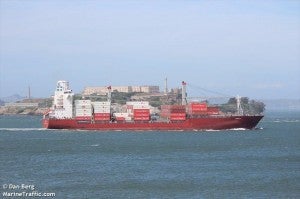 SAN FRANCISCO — The fatal stabbing of a Filipino seafarer onboard a containership is thought to have been a suicide, the vessel’s owner told Splash247.com on May 20.

The man was found dead on Sunday, May 17 onboard the handysize containership Elbella (1,740 dwt, built 2006), owned by Greece’s Eastern Mediterranean Maritime.

The man’s body had been stabbed several times and was found in a pool of blood. Two knives were found next to the body, Maltese press reports say. An autopsy is underway.

The Malta-flagged boxship had just arrived from Turkey, but has since been released by port authorities because investigations pointed to suicide, Eastmed told Splash. The shipping company is still waiting for the official results of the autopsy.

Recent research from the UK’s Swansea University shows that seafaring is the career with the world’s second highest suicide rate after coal mining.